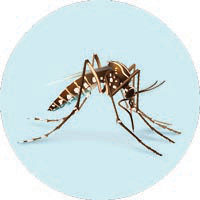 The New Mexico Department of Health (NMDOH) announced the launch of a summer campaign to educate the public about Zika virus prevention. So far this year, there has been just one reported case of West Nile Virus and no reported cases of Zika Virus in New Mexico. However, we are entering the 2017 mosquito season.

The campaign focuses on providing information to pregnant women and their partners who may be considering travel to areas where Zika virus transmission is ongoing.

The prevention efforts are being supported by television and radio spots throughout New Mexico as well as billboards and movie theater advertising.

“Our message is that if you or your partner are pregnant or thinking about becoming pregnant, please consider postponing travel to areas where Zika virus is actively spreading,” DOH Secretary Lynn Gallagher said. “If you must travel to those areas, take every precaution that you can to avoid mosquito bites while you’re there.”

Zika virus is currently transmitted in areas of the world which are common travel destinations for New Mexicans, including Puerto Rico, the Caribbean Islands, most of Mexico, Central and South America, and parts of Asia and Africa.

However, there are six counties in southern New Mexico – Doña Ana, Chaves, Eddy, Sierra, Lea, and Roosevelt counties – where two of the mosquito species capable of transmitting Zika were found while conducting mosquito surveillance in 2016.

“Because Zika is also transmitted via sexual contact, a traveler that returns with the virus in their blood can transmit it to their sexual partner if they have unprotected sex and that is another way a person in New Mexico can get infected,” State Epidemiologist Dr. Michael Landen said. “If a person returns to New Mexico with the virus in their blood to one of the New Mexico counties where we have the Zika mosquitoes, then there’s a chance that a mosquito can get infected after biting that person and begin local transmission in that area.”

The campaign features a significant investment in materials and outreach efforts to English and Spanish speaking populations in New Mexico and is supported with funds provided by the Centers for Disease Control and Prevention (CDC).

For more information about Zika virus, visit the Zika Virus section of our website. A full list of countries with active Zika virus transmission can be found on the (CDC) Zika Virus Travel Information page.

With increased time spent outdoors, it is important to act to reduce your risk of mosquito bites: