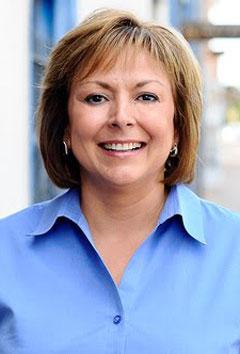 Martinez said the goal is to provide resting places that meet the highest federal standards for the large portion of New Mexico’s veteran population that live a great distance from the three federal cemeteries currently available to them at Santa Fe, Ft. Bayard and Ft. Bliss.

“Our veterans and their spouses—no matter where they live—deserve a special, dignified final resting place befitting a man or woman who has sacrificed so much to serve and protect our country as a member of the United States Armed Forces, and in a state as large as ours, we should be doing everything in our power to ensure that this resting place is as close to home as possible,” Martinez said. “Furthermore, family members of our veterans should not have to drive hours upon hours to visit the gravesites of their loved ones – particularly when, at a very low cost to the state, we can establish smaller federal cemeteries within or close to their own communities.”

According to the U.S. Department of Veterans’ Affairs, 172,595 veterans live in New Mexico—which, at 121,589 square miles in size, is the nation’s fifth largest state. Efforts to have additional, large national cemeteries built in New Mexico have failed in the past due to the strict VA mandate that a minimum of 100,000 veterans must live within a 75-mile radius of any proposed national cemetery site. No communities outside of the Albuquerque metro area meet this veteran-population condition, leaving a substantial number of veterans and their families having to travel a great distance for access to federal burial sites. Roughly 131,000 of the state’s 172,595 veterans live beyond the 75-mile radius surrounding the national cemeteries in Santa Fe and Ft. Bayard.

To serve these veterans, the New Mexico Department of Veterans’ Services is drafting a plan, which projects a $390,000 to $640,000 cost for the development of up to three to four small three-to-five acre veterans’ cemeteries in our rural areas. The funding must be appropriated by the Legislature. The state could recoup a large portion of this start-up funding by applying for a special VA Cemetery Grant which matches on a dollar-per-dollar amount any money put up by a state or tribal government. Once these initial veterans’ cemeteries are authorized and built, depending upon need throughout the state, up to six additional cemeteries could be established in other rural or tribal areas.

The New Mexico Department of Veterans’ Services would assume managerial control of these new cemeteries. Any funding committed by the Legislature would be contingent on a community being able to secure the three-to-five acres needed for these new cemeteries. The cemeteries would meet VA development standards and conditions in place for all national cemeteries.