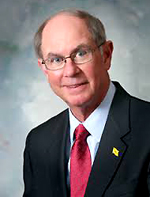 Rep. Jim Dines
STATE News:
Rep. Jim Dines (R-Bernalillo) yesterday introduced HJR 8, a proposed constitutional amendment that would establish an independent ethics commission with teeth and transparency.
The bill is co-sponsored by a group of southern New Mexico legislators, Sen. Jeff-Steinborn (D-Dona Ana), Rep. Nathan Small (D-Dona Ana), and Rep. Bill McCamley (D-Dona Ana).
If passed by a majority in both houses, the measure would go to the voters in 2018 and require enabling legislation.
The seven-member ethics commission proposed in the amendment would have the power to initiate, receive, and investigate complaints against public officials, candidates, lobbyists and state contractors who violate standards embodied in the governmental conduct, campaign finance, lobbyist and contracting laws.
The commission would have subpoena power and exclusive jurisdiction over civil violations of the law, with the ability to impose penalties and sanctions if clear and convincing evidence is presented. Criminal violations would be referred to the appropriate agency for prosecution; the commission would refer recommendations for impeachment to the legislature.
Transparency measures included in the amendment provide for public access to hearings and other materials. Verified complaints would remain confidential only until a response from the subject of the complaint is filed or the date for a response elapsed.
“This bill is a basic framework for an independent commission and it includes the basics which I believe the public wants: transparency and enforcement power,” Dines said. “That’s the ‘teeth’ of this commission.”
Dines said it’s important to have an ethics commission enshrined in the constitution, just as other judicial processes are.
“This constitutional commission cannot be done away with or gutted of its power in the future,” he added.
A recent proposal in the US House would have stripped the Office of Congressional Ethics of much of its power, but it was met by opposition from both the public and the President- elect.
New Mexico is one of nine states without an ethics commission. Commissions in the neighboring states of Texas, Colorado and Oklahoma have been enshrined in those sates’ constitutions, as has Florida’s.
“It’s time that New Mexico move into the modern era of government accountability and establish an independent ethics commission now,” co-sponsor Sen. Jeff Steinborn said. “When we enforce the laws of government ethics, all of society benefits.”
“There’s an obvious gap in trust between government officials and the people,” co-sponsor Rep. Bill McCamley said. “Creating a separate board to hold ourselves accountable is a way to rebuild that relationship.”
“I am thrilled to be working with colleagues to make sure that New Mexico moves forward with an independent ethics commission,” Rep. Nathan Small said. “It will create a sound foundation from which to work on the budget and other issues.”
Common Cause New Mexico director Viki Harrison said that her organization is in full support of Dines bill. “It’s a key priority for us, and we will be watching how legislators vote,” she said.
Menu
Los Alamos
39°
Fair
6:55am4:51pm MST
Feels like: 36°F
Wind: 5mph NW
Humidity: 36%
Pressure: 30.38"Hg
UV index: 0
MonTueWed
59/36°F
59/36°F
59/36°F
Weather forecast Los Alamos, New Mexico ▸