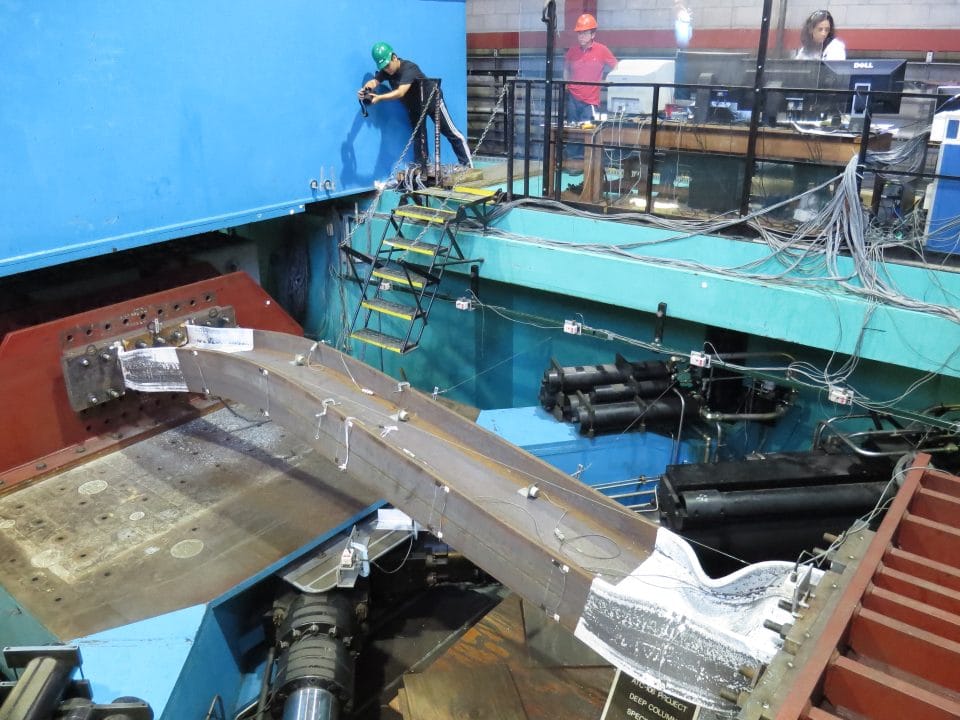 Researchers fasten 48 steel columns of varying dimensions into a hydraulic system called a shake table that thrusts one end of each column back and forth, replicating the shaking motions of an earthquake. Courtesy/UC San Diego

Since the mid-1990s, a type of steel column that commonly features slender cross-sectional elements has become more prevalent in buildings along the West Coast of the United States and in other seismically active regions.

Although these columns have complied with modern design standards, our understanding of how they would perform during an earthquake has been limited by a lack of full-scale testing.

Using an earthquake-simulating device known as a shake table, researchers at the National Institute of Standards and Technology (NIST) and the University of California San Diego (UC San Diego) identified deficiencies in the performance of these columns, with many buckling prematurely.

Based on the results, documented in a NIST report, and a detailed analysis of the test data, the researchers devised new limits for column slenderness, described in a paper published in the Journal of Structural Engineering last April. The American Institute of Steel Construction (AISC), a standards organization, has adopted the proposed limits in a draft for public feedback of the 2022 edition of AISC 341, a standard that provides guidance on designing earthquake-resistant steel buildings.

“A lot of current design provisions are based on scaled-down column tests or a very small number of full-scale tests. But the full-scale testing we conducted here has allowed us to begin filling in the knowledge gap regarding the performance of these kinds of columns under extreme loading conditions,” NIST structural engineer John Harris said. “The results have supported the development of enhanced guidance for new buildings and could inform decision making on modifying columns in existing structures.”

Throughout the 1990s, engineers gained substantial insight into the way structures respond to real earthquakes, such as the 1994 Northridge earthquake, which devastated the greater Los Angeles area. As a result, building codes began to impose strict requirements on the degree that buildings could sway during earthquakes — a measure known as story drift.

Steel columns in multistory buildings, with cross sections shaped like a capital “I,” are good at supporting the downward forces created by the weight of the floors and roof resting upon them. But a shaking ground can introduce additional forces in all directions, potentially causing columns to sway laterally, contributing to story drift.

Before 1994, the middle part of columns’ I-shaped cross sections, known as webs, were often relatively short in buildings with steel frames. But since then, building designers have satisfied story drift requirements by selecting columns with longer, or deeper, and typically more slender webs to boost their lateral stiffness. 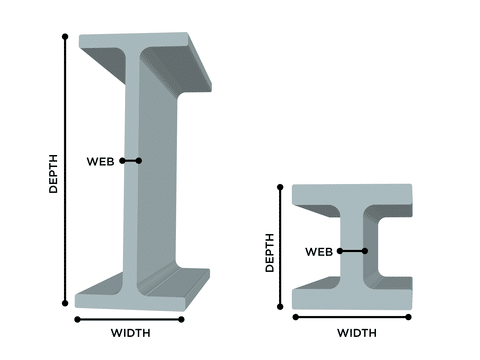 Before 1994, the webs of steel columns were often relatively shallow (right) in buildings with steel frames. But since then, building designers have satisfied drift requirements by selecting columns with longer, or deeper, webs (left) to boost their lateral stiffness. Courtesy/N. Hanacek/NIST

According to the current building standards, these deep columns were acceptable to use as long as their web dimensions did not surpass certain depth-to-width ratios — known as a slenderness limit — meant to reduce the risk of columns losing their capability to carry weight during earthquakes, Harris said. However, some engineers were unsure of how these columns would hold up against real earthquake motions.

When the slenderness limits were developed decades ago, engineers did not have the capability of testing the seismic performance of full-scale columns like those actually used in buildings. Instead, they based the limits on reduced-scale model columns, creating some uncertainty about their effectiveness in reality. But full-scale tests have since become possible with the availability of very powerful facilities, known as shake tables, designed to put full-scale structural components through the seismic gauntlet.

To assess the slenderness limits, Harris worked with fellow structural engineering experts at the Jacobs School of Engineering at UC San Diego, with access to one of the campus’ shake tables, called the Caltrans Seismic Response Modification Device (SRMD) Test Facility.

The researchers tested 48 deep columns — donated by AISC and the Herrick Corporation, a steel fabricator — each 5 1/2 meters long and with webs of varying slenderness. Using the SRMD, they recreated the effects of earthquakes (which can differ greatly from quake to quake) on the columns.

The machine simulated the weight of buildings on the columns by applying either constant or fluctuating compression, the latter representing the forces that pulse through the structure as the building sways back and forth. By jolting one end of the column back and forth with the SRMD’s hydraulic system, the team simulated a range of quake-induced lateral motions, the degree of which, in reality, depend on a building’s distance from the fault line that earthquake ground motions emanate from.

The researchers fastened 48 steel columns of varying dimensions into a hydraulic system called the Seismic Response Modification Device (SRMD), which thrusted one end of each column back and forth, replicating the shaking motions of an earthquake. Additional tests can be viewed here: ATC 106 Project. Courtesy/UC San Diego Caltrans SRMD Test Facility

The team measured the response of each column during the test, taking note of any permanent changes to its shape. In addition, they coated the columns in a layer of white paint that would begin to chip off as the steel bent, making permanent deformation more visually apparent. They tested every column until it could no longer oppose the forces exerted by the machine, driving some to buckle near their ends and others to contort along their entire length. Among the deformed columns, they picked up on a telling pattern.

“We noticed that, as the columns became stockier and less slender, they can more easily go through the entire loading protocol without losing a significant amount of their capability to withstand the earthquake motions,” Harris said.

Their findings suggested that the previous small-scale tests were not painting a complete picture of deep column performance and that column webs meeting the limits prescribed by today’s codes may still be too slender.

Keeping the story drift requirements in mind, Harris and his research partners at UC San Diego were able to propose new slenderness limits with the data from the full-scale experiments. Columns with webs sized according to the new limit could potentially meet drift and stability requirements at the same time.

The researchers brought the revised limits before the AISC for review, which resulted in the organization including the limits in a draft of the 2022 edition of AISC 341. When the new version is published this December, the more stringent limits on steel column webs could soften the blow of earthquakes, potentially saving newly designed buildings from unnecessary damage or partial collapse.

In the future, the researchers aim to incorporate the limits into standards for evaluating existing buildings as well, enabling engineers to identify deep columns in need of corrective actions such as the addition of bracing. But for now, AISC is accepting public feedback until Feb. 21, 2022, on its draft standard, which is available for download on its site.