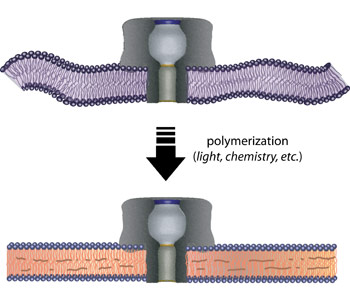 A recent NIST patent shows that nanopores, which may one day help doctors perform quick analysis of blood samples, are not harmed by the polymerization process that could help nanopores operate in biochips. Polymerization hardens and stabilizes the membrane surrounding the nanopores, both of which are beneficial effects. Courtesy Robertson/NIST

Having blood drawn and analyzed to diagnose disease is a process that can take a few days, but what if your doctor could perform this analysis in moments, right before your eyes?

That’s the promise of “lab on a chip” technology, and researchers are working on a variety of fronts to remove technical roadblocks.

A new idea recently patented* by the National Institute of Standards and Technology (NIST) and the Naval Research Laboratory (NRL) addresses the issue of sensor shelf life, showing how some such chips might be made to last for months or more until needed.

NIST’s John Kasianowicz has spent decades trying to create technologies that will enable doctors to perform fast, real-time chemical analysis, and one promising approach involves building arrays of tiny pores, each small enough that only one protein or DNA molecule at a time can pass through and be identified.

As our bodies respond to infection or other disease states, our cells release different proteins, and measuring the concentrations of these chemicals in a blood sample can provide a quick snapshot of our health.

A membrane peppered with large numbers of these “nanopores” might give doctors a way to take that snapshot easily, if it could be mounted on a biochip compatible with electronics and computer technologies.

“But these chips need to have a long shelf life,” Kasianowicz said. “As it stands, we make nanopore membranes from fatty lipids that aren’t robust—the membranes only last a week or so. We wanted to extend that lifetime substantially.”

Kasianowicz’s and Devanand Shemoy’s (NRL) teams explored the possibility of turning the lipids into polymers, the sorts of molecular chains used in plastics.

Polymerizing the lipids made them tougher, but the question was whether doing so would somehow render the nanopores ineffective at trapping and identifying the blood serum proteins, because the process either squeezes or stretches the tiny membrane holes dramatically.

Tests at NIST showed the nanopores performed just as well as before, meaning polymerized membranes could work on a biochip.

“Conceivably, chips made with polymerized membranes could last a year, perhaps much longer,” Kasianowicz said. “The nanopores still allow molecules to flow through for characterization.”

The NIST team patented the concept, which shows specifically that the nanopore will still function in a polymerized environment.

Kasianowicz says the next step will be to demonstrate that the polymerized membranes will last when they have been attached to a chip, something their results have not yet shown.

“We’re optimistic though—based on observations we’ve made in previous research, it should work in principle,” he says. “We hope this is the next step toward allowing medical professionals to judge health conditions based on immediate blood analysis, which should be more accurate than using day-old samples.”

For a potential application the patent’s technology, one that could be realized in the future once certain technical issues are addressed, see the Oct. 2, 2012, story “NIST, Columbia Engineering Collaborate on Inexpensive DNA Sequencing Method” at http://www.nist.gov/public_affairs/tech-beat/tb20121002.cfm#dna.