NIST: New Instrument Will Give Scientists Window On Change At Nanoscale 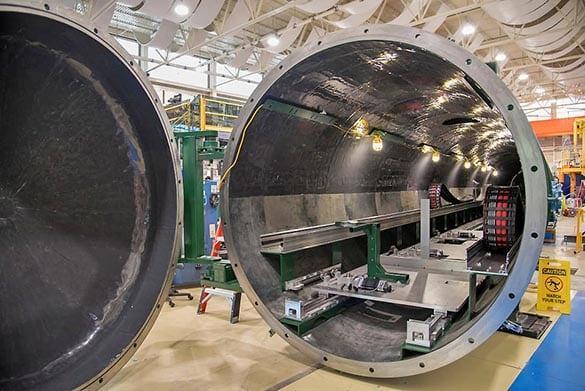 The Very Small Angle Neutron Scattering (VSANS) instrument. Courtesy/NIST
NIST News:
It looks more like a long water main pipe than a microscope, but a new custom-built instrument at the National Institute of Standards and Technology (NIST) will give scientists new ability to glimpse moment-by-moment changes in materials on the crucial nanometer scale.
(Link to video here).
The tool’s name is almost as lengthy as its 45-meter footprint—it’s called the Very Small Angle Neutron Scattering (VSANS) instrument. Culminating from several years of in-house engineering, VSANS fills a gap in vision that U.S. researchers have craved for at least a decade: the ability to spot nanometer-scale changes in materials that could improve the medicines in your cabinet, the chips in your computer and even the soap in your shower.
The scale where “things happen” in those and other materials is right between 10 and 1,000 nanometers—the realm of nanotechnology. A view at this size scale means you can watch how chains of molecules assemble themselves into more complicated structures or observe how a promising new prototype electronic switch changes from one configuration to another. Understanding these changes is key to harnessing them.
“It’s the most critical length scale for seeing the emergent properties of materials,” said NIST’s Dan Neumann, a physicist at the NIST Center for Neutron Research (NCNR). “You want to know why it works the way it does, so you can improve it.”
The instrument offers scientists the ability to see at this scale, and even ten times smaller, down to one nanometer. Moreover, researchers can watch changes happen over time, millisecond by millisecond. Other instruments at the NCNR use a similar approach as VSANS for peeking inside solid objects, but they do not provide structural information over such a broad length scale, nor can they reveal dynamic changes.
Part of the instrument’s appeal is its ability to explore biology. Among the most important targets for drugs is also one of the most difficult to study: membrane proteins. Lodged within the protective outer membrane of our cells, these complicated molecules resist study because they are difficult to crystallize (a strategy useful for analyzing most other proteins), but comprehending their behavior is crucial for drug design.
“Using neutrons, we can see these proteins as they look in their natural state,” said Kenneth Rubinson, a guest researcher from Wright State University in Ohio who has been performing experiments at the NCNR for 15 years. “We hope VSANS will let us get this data faster so we can get better models of the structure.”
VSANS also allows its users to explore objects at multiple length scales simultaneously, providing more perspective than either scale alone would offer. For example, one approach for delivering drugs effectively involves encapsulating them in nanometer-sized bubbles called micelles so that they remain in the bloodstream as they travel to their targets. Seeing how these micelles behave and connect with one another appeals to NIST’s Elizabeth Kelley, an instrument scientist at the NCNR.
“With other instruments, it’s like making a movie where you can only see half the picture at once,” she said. “I’ve lost a lot of time trying to optimize the location we’re looking at so we don’t miss anything, but with VSANS you don’t have that problem. Seeing how these micelles interact over time can help us understand how a drug can get released, or how efficient you are at encapsulating it.”
Micelles also form in everyday products like shampoo. Tweaking their behavior might make all of us happier once we’re out of the shower.
“We don’t think about it, but shampoo is actually a complex fluid made of nanoparticles and polymers, and their basic physical properties ultimately affects, for example, how much a shampoo dries out your hair,” said John Riley, who is finishing a National Research Council postdoctoral fellowship at the NCNR. “We’re just looking at the micelles’ basic properties here, but the more you know about those properties, the more you can control what that fluid does.”
With VSANS, researchers at the NCNR expect many new discoveries in the pipeline.
LOS ALAMOS