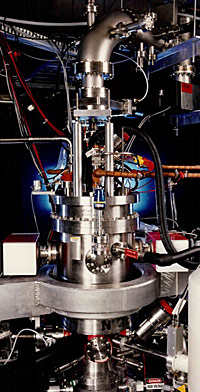 Photo: Observations made with NIST’s Electron Beam Ion Trap indicate that in ions with a strongly positive charge, electrons can behave in ways inconsistent with quantum electrodynamics (QED) theory, which describes electromagnetism. While more experiments are needed, the data could imply that some aspects of QED theory require revision. Courtesy/NIST

A cornerstone of physics may require a rethink if findings at the National Institute of Standards and Technology (NIST) are confirmed.

Recent experiments suggest* that the most rigorous predictions based on the fundamental theory of electromagnetism—one of the four fundamental forces in the universe, and harnessed in all electronic devices—may not accurately account for the behavior of atoms in exotic, highly charged states.

The theory in question is known as quantum electrodynamics, or QED, which physicists have held in high regard for decades because of its excellent track record describing electromagnetism’s effects on matter.

In particular, QED has been especially useful in explaining the behavior of electrons, which orbit every atomic nucleus.

But for all of QED’s successes, there are reasons to believe that QED may not provide a complete picture of reality, so scientists have looked for opportunities to test it to ever-increasing precision.

One way to test parts of QED is to take a fairly heavy atom—titanium or iron, for example—and strip away most of the electrons that circle its nucleus.

“If 20 of titanium’s 22 electrons are removed, it becomes a highly charged ion that looks in many ways like a helium atom that has been shrunk to a tenth its original size,” says NIST physicist John Gillaspy, a member of the research team. “Ironically, in this unusual state, the effects of QED are magnified, so we can explore them in more detail.”

Among the many things QED is good for is predicting what will happen when an electron orbiting the nucleus collides with a passing particle.

The excited electron gets bumped up momentarily to a higher energy state but quickly falls back to its original orbit. In the process, it gives off a photon of light, and QED tells what color (wavelength) that photon will have.

The NIST team found that electrons in highly charged helium-like ions that are excited in this fashion give off photons that are noticeably different in color than QED predicts.

While the results—obtained using NIST’s Electron Beam Ion Trap Facility—are interesting enough on their own to warrant publication, Gillaspy says he hopes the finding will stimulate others to measure the emitted photons with even greater accuracy.

Currently, the NIST team is preparing to release the results of measurements of other colors of light emitted from the exotic atoms that bolster the initial findings.

“What the NIST experiment found is interesting enough that it merits attention,” says Jonathan Sapirstein, a professor of physics at the University of Notre Dame. “Independent calculations should be done to confirm the theory, and other experiments should also confirm the findings. However, if no errors are found in the theory and the NIST experiment is correct, some physics outside of QED must be present.”