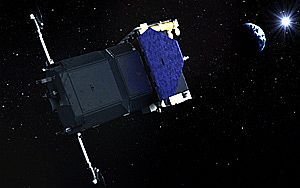 With the aim of improving forecasts of space weather, NASA’s Solar Dynamics Observatory will peer deep inside the sun, to where the solar magnetic field is generated. It also will keep tabs on how energy is released into the solar atmosphere and how the sun’s output of extreme ultraviolet radiation varies. Courtesy/NASA, Ryan Zuber

The sun is about to undergo unremitting scrutiny. About six times each minute of every hour for at least five years, a soon-to-be launched NASA satellite will measure the sun’s quirky—and sometimes stormy—output of extreme ultraviolet (EUV) light.

To ensure that this solar stake-out yields data useful for understanding the weather in space and its earthly consequences, researchers at the National Institute of Standards and Technology (NIST) are helping a NASA team prepare for annual rocket-borne check-ups of key instruments aboard the Solar Dynamics Observatory (SDO).

From one multi-year solar cycle to the next, the amount of ultraviolet radiation generated by the sun can change as much as tenfold.

On shorter time scales—during, for example, a violent solar flare—ultraviolet output can jump by a factor of 1,000 in a matter of minutes.

EUV light is highly energetic. It is absorbed by the Earth’s upper atmosphere, ionizing gases and creating electric currents that form the inner edge of the Earth’s magnetosphere.

Changes in the sun’s magnetic field driven by the solar wind in turn affect the Earth’s atmospheric electric currents and magnetic fields, and can cause such disruptive effects as wreaking havoc with the Nation’s electric power grid.

In addition, the ionization of atmosphere gases by EUV and X-ray irradiation disrupts the high-frequency radio communication and decreases the accuracy of GPS systems.

Related phenomena can change the density of the upper atmosphere, increase the drag on satellites in low-Earth orbit, and knock them out of orbit.

To better understand the origins and impacts of EUV phenomena, the SDO’s three onboard experiments will make nearly continuous observations of changes in the sun’s magnetic field, solar-flare and other activity on the surface and in the interior, and energy outputs.

According to NASA, the experiment will produce enough data on solar EUV output to fill one compact disc every 36 seconds.

Key to the success of the experiments is ensuring that the instruments stay calibrated and record accurate data.

In October, a few months before the SDO’s tentatively scheduled launch, the NASA team will perform a dry run of the rocket-science equivalent of telemedicine. A rocket will carry duplicates of instruments built for SDO’s EUV Variability Experiment, or EVE.

If only for a minute or two, the duplicate devices will take measure of the Sun’s EUV emissions.

Data gathered during the brief outing will enable NIST to complete its characterization of the EUV spectrophotometer, which detects EUV emissions at several specific wavelengths, including those associated with solar flares.

Once a year, measurements made by rocket-borne spectrophotometers will be used to recheck accuracy of the counterpart instruments on the SDO as it orbits 22,000 miles (about 35,400 kilometers) above the Earth.

From the comparison, the NASA team can determine whether values in the data beamed to scientists on Earth should be adjusted.

Once recalibrated, the onboard instruments also will be used to check the measurement performance of two other spectrographs desigend to measure the brightness of radiation in portions of the EUV spectrum.

The Space Weather Prediction Center will be a major user of SDO solar surveillance data. Jointly operated by the National Oceanic and Atmospheric Administration and the U.S. Air Force, the Boulder, Colo., center is the national and world warning center for disturbances that can affect people and equipment working in the space environment.

EVE is led by principal investigator Tom Woods of the University of Colorado Laboratory for Atmospheric and Space Physics.

The EUV spectrophotometers were designed and built at the Space Science Center at the University of Southern California. Calibrations of the spectrophotometers as well as other devices in the EVE instrument package were performed on high-accuracy beamlines at the NIST SURF III Synchrotron Ultraviolet Radiation Facility, which are partially supported by NASA.

For more information on SDO and its three experiments, go to: http://sdo.gsfc.nasa.gov/.