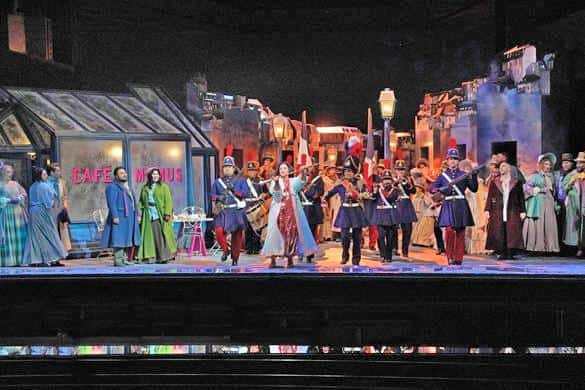 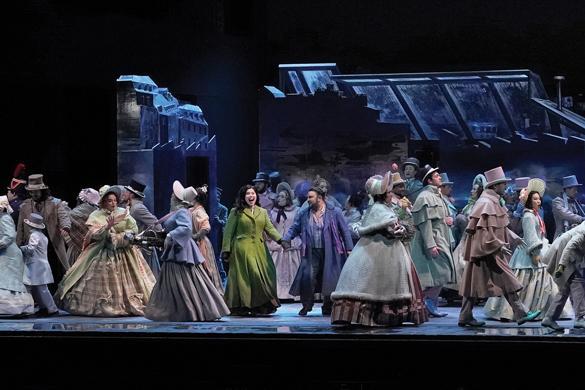 Charles MacKay grandly added to his legacy when he engaged Mary Birnbaum to direct a new production of La Boheme.

Her vision of focusing on the women characters, yet still having a “traditional” presentation, succeeded magnificently on opening night of the Santa Fe Opera’s 63rd Season.

Birnbaum tasked Grace Laubacher to design the sets, and Camellia Koo to design the costumes. Laubacher’s complex design suggests to me a Rubik’s Cube as the set pieces exchange places, twirl around, and reveal Monet-esque colorations. The costumes for the men residing in the garret make statements about their personalities, and the costumes for the women they have rollercoaster relationships with are styled for a grisette (Mimi) and a lorette (Musetta).

Costume Department Director Missy West received designs for 111 costumes, and her staff assisted by her “A-Team” of Technical Apprentices have produced a veritable feast for the eyes.

Nicaraguan-American soprano Gabriella Reyes makes her SFO debut as Musetta. The other musketeers in the garret are bass Solomon Howard (2016 debut) as Colline, former Apprentice singers baritone Zachary Nelson (2013 debut) as Marcello, and bass Will Liverman making his debut as Schaunard.

Bass-baritone Dale Travis (1992 debut, and more recently in SFO productions of Tosca and Arabella) is both Benoit, the landlord, and Alcindoro, Musetta’s “sugar-daddy.” When Benoit comes knocking at the garret door to collect the rent, he is accompanied by a supernumerary as his son, who someday will be the one who collects rent.

During the performance Friday night I was privileged to sit next to Dale Travis’ wife. Lisa was returning Saturday morning for Opera Insider Day to have a backstage tour.

Those events include light refreshments.

I also recommend going to the Prelude Talks in Stieren Orchestra Rehearsal Hall that are 2 hours and 1 hour before performance times.

Additional pre-performance information may be seen in the Los Alamos County libraries that have copies of the 2019 Program Book, edited by the SFO Dramaturg, Cori Ellison.