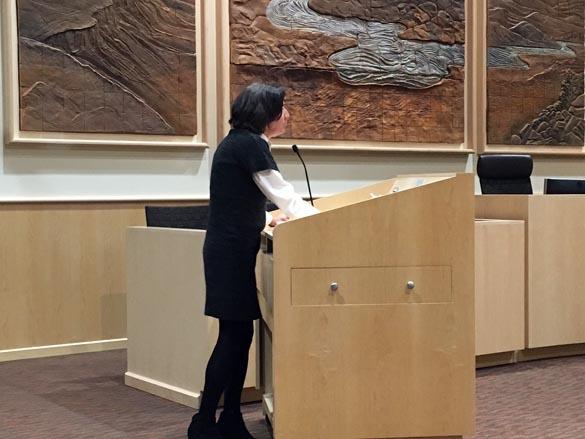 The Los Alamos Visitor Center is getting a new home in 2019. It will be relocated from 109 Central Park Square to space occupied by the NMSU Cooperative Extension Office in the Community Building near Ashley Pond.

Los Alamos County Council approved the relocation when it unanimously passed a motion to award the $682,690.26 contract to operate and manage the visitor center to the Los Alamos Commerce and Development Corporation (LACDC) during Tuesday night’s regular council meeting. The motion passed 6-0. Councilor Susan O’Leary was absent.

Assistant to the County Manager Linda Matteson said the move will cause a “domino effect.” Meaning, when the visitor center moves to the space in the Community Building, the Cooperative Extension Office will move to the building known as the Red Cross cottage, which sits between Mesa Public Library and Fuller Lodge. The cottage’s current occupants, the Manhattan Project National Historical Park officials, will relocate to office space on the first floor of Fuller Lodge. That office’s current inhabitants, the Los Alamos Arts Council, will move to the second floor of Fuller Lodge.

Matteson added that the move will cause the Los Alamos Visitor Center to be closed for up to 60 days. The closure should not extend past March 1, 2019. However, Matteson pointed out that January and February are typically the visitor center’s slowest months. The White Rock Visitor Center will be open during this time.

She added that outreach will be done and there will be signage directing people where to park.

The Tourism Implementation Task Force recommended this location as part of a short list of possible relocation spaces for the Visitor Center. Matteson said in the tourism strategic plan, there is a recommendation to move the visitor center. As a result, the Task Force’s first assignment was to look at alternate sites.

To choose the alternative sites, Matteson said the task force established nine evaluation criteria. Some of the criteria defined were to find a location to maximize visitors’ spending opportunities and a place that already had visibility as a destination. Matteson said the task force also created a comprehensive scoring rubric and analyzed 28 potential visitor center sites.

Matteson said the task force “felt all those five would be a great improvement.”

What put the Cooperative Extension space in the forefront is the fact that it housed in a County-owned building, which would reduce costs, Matteson said. She pointed out that leasing a commercial space would cost between $48,000 to $60,000 a year. This is in addition to custodial expenses as well as utilities and supplies.

Another benefit, Matteson said, is that the Cooperative Extension Office gets lower public visitation than the Visitor Center and doesn’t need to be in the center of town. This location would be invaluable to the visitor center, she said, because it is in the heart of town.

“It will really bring the visitor center to a place where most visitors already come,” Matteson said, adding, this “can only enhance the visitor experience.”

Regarding the Cooperative Extension’s new location, Councilor Pete Sheehey asked how much space the Red Cross cottage would provide them.

Matteson said the space is nearly identical although the cottage is slightly less.

Sheehey asked if the cottage had been updated recently. Matteson said the cottage has had some modifications recently. These include a new heater, wiring and painting. She added additional work is being done to the cottage including installation of modular furniture. Sheehey also inquired about possibly keeping the Visitor Center opened in Central Park Square during the move.

Matteson said they have come to the end of their six-month contract extension and it is the last extension. If the visitor center were to continue to stay in Central Park Square, the cost would go up considerably since a space sharing arrangement with LACDC is being discontinued.