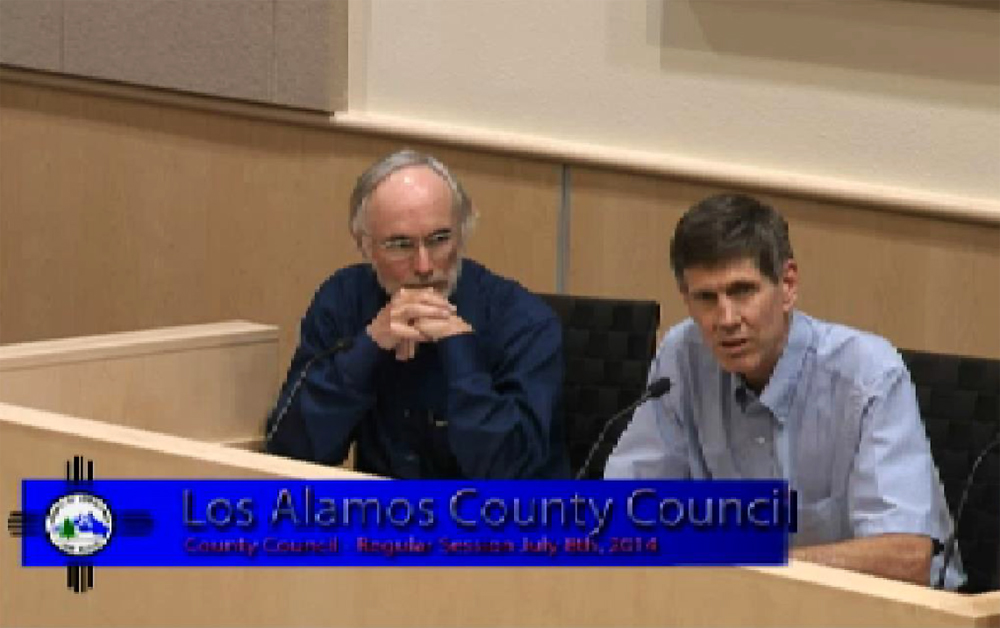 At its June 18 meeting, the Board of Public Utilities determined that the Board cannot present a formal position on the San Juan-Chama water project until the revised 40-year Water Plan is completed.

In the Aug. 20, 2013 County Council work session, staff was directed to cease design of the test well located at site 3 in White Rock and proceed to explore the following items:

a. Easements and environmental clearance for the installation of a new transmission line through an alternate path and booster station on DOE/NNSA property is ongoing to bring Otowi Well No. 1 back into production. The well has been offline due a number of leaks in the transmission line located under the main hill road entering Los Alamos. The condition of the line is progressively deteriorating and repairs would require closing the main hill road to excavate. The project has been designed and will be bid for construction once the DOE/NNSA easements are acquired.

b. DPU has submitted proposed sites for replacement wells for Pajarito Well Nos. 1 and 2 to DOE/NNSA for environmental clearance. Once the sites are approved DPU will prepare easement documents for execution and begin permitting for the replacement wells.

The County’s 40-Year Water Plan was completed in 2006. The growth projections included in the plan estimated significant growth in Los Alamos County due a number of land transfers from DOE/NNSA to the county and speculated growth of the operations at Los Alamos National Laboratory.

The anticipated growth has not taken place and the analysis in the plan based on those projections is no longer valid. Staff has been tracking the effort to update the Los Alamos County Comprehensive Plan with intentions of using the updated comprehensive plan as a reference in preparation of growth projections when revising the 40-Year Water Plan.

The Comprehensive Plan is still in the process of being updated but a number of elements of the Comprehensive plan have been updated since 2006. An RFP will be issued this month to update the 40-Year Water Plan. Growth projections will be developed by coordinating with the county planning staff and using published regional data.

DPU pursued development of the SJC project last year on the premise of securing the County’s 1,200 Acre-Feet of SJC water. The public, Utility Board and Council posed questions regarding the need for additional water at this time. The existing water right available to DPU to serve the communities of White Rock, Los Alamos and Los Alamos National Laboratory is 5,541.3 AC-FT, of which the County owns 3,878.91 AC-FT and DOE/NNSA owns 1662.39 AC-FT. Over the last nine years, the County has used on average 75.7 percent of the water right annually serving all customers.

New developments that must be considered in the county water supply planning:

This month, DPU will issue an RFP for a consultant to revise the 40-Year Water Plan. The revised plan will provide a timeframe in which the county would need to develop the SJC water to meet increased demands in the community. DPU staff recommend that the Utility Board and Council delay any further direction on proceeding with developing the SJC water until the revised 40-Year Water Plan is completed.

DPU will continue to monitor progress by LANL in developing its pump and treat initiative as well as the progress of the supercomputing facility. Should an increase in water demand at LANL require water rights beyond their 1662.39 AC-FT ownership, DPU must consider options which include but are not limited to contributing county owned water rights to sustain LANL requirements, modifying the terms of the LANL water service contract or coordinating LANL participation in developing SJC water.

Information Received in Utility Board Meeting

Councilor Pete Sheehey provided a handout to the board members in the June 18 Utility Board meeting with a projection of LANL’s water use in the upcoming years. The information was provided to Sheehey in response to an inquiry he made recently. The graph provided by LANL indicates a 290 AC-FT increase in demand beginning in FY17, which Sheehey indicated was attributed to a new supercomputing facility and another 100 AC-FT  from FY18 to FY20.

A member of the public raised the question whether the aquifer that the County’s existing wells draw from is depleting or stable. Staff has been advised informally that the aquifer is not drawing on some occasions and on other occasions heard it is experiencing slight drawdown in discussions with various water professionals. This question shall be investigated and a definitive answer determined. The board commented that this may be a task included in the upcoming 40-Year Water Plan.