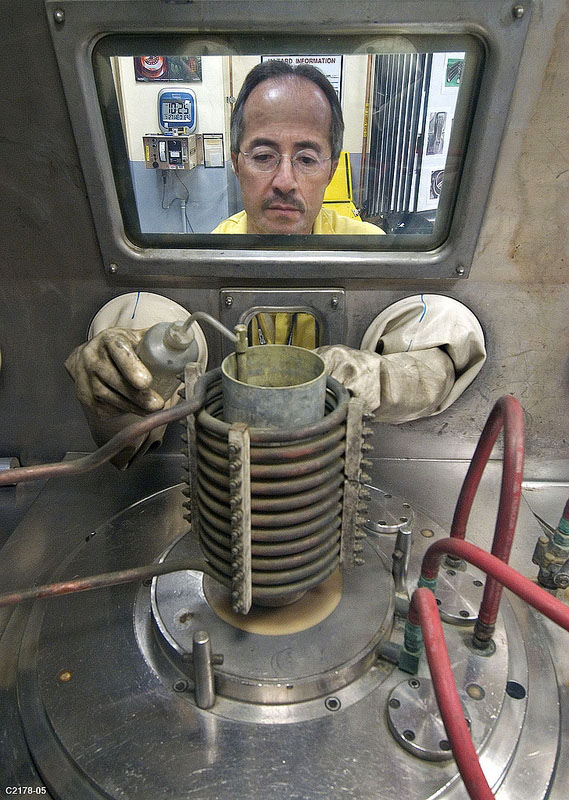 Pit Production would continue at PF-4, according to new report by the Congressional Research Service. Courtesy/LANL

The Royal Crest trailer park may have a role to play in fulfilling a Congressional mandate for Los Alamos National Laboratory to resume production of plutonium pits, the imploding, hollow cores that detonate thermonuclear weapons.

A report by the Congressional Research Service that became available this week proposes several options to solve manufacturing, safety and delivery problems on a shrinking budget, in a tight space and within a relatively short period of time. But in order to meet those goals, something or perhaps several things may have to give. One of them has to do with the trailer park located on the south side of Los Alamos Canyon.

Last year, a provision in the FY 2015 National Defense Authorization Act established legal requirements and deadlines for delivering new batches of plutonium pits at Los Alamos, beginning production in 2021 and ramping up to not less than 10, 20 and 30 war-reserve plutonium pits by 2024, 2025 and 2026, respectively. The requirement is to be able to achieve a production rate of 80 pits per year for three months in 2027.

The final deadline can be extended up to two years by joint request of the secretaries of defense and energy. This represents a new strategy by Congress, which has focused in the past on inputs, according to the report, “such as requiring a plutonium-processing building to be constructed by a certain date at a certain cost,” but the new emphasis is on outputs.

Constraints on nuclear weapons manufacturing at PF-4, the lab’s main plutonium facility include space and multiple architectural and structural safety features depending on the materials, processes and the risks involved.

Pit production at PF-4 must have enough “Material at Risk” (the radioactive material that could be released in an accident, also known as MAR) and enough space to do it in.

The report notes that a key factor in determining the MAR limit has to do with the location of the “Maximally-exposed offsite individual,” (MEOI), the hypothetical person outside the laboratory’s property, closest to PF-4 in this case. Currently, Royal Crest, containing several dozen trailers, located about 3,500 feet away from PF-4 is the posited location of that individual, but after that the closest inhabited structures are across the canyon in the Los Alamos town site, about 6,000 feet from PF-4.

“It occurred to me that if you could move the MEOI farther away, that would mean you would would reduce the dose to the MEOI from an accident in PF-4 and as a result you could probably increase the material at risk limit,” said Jonathan E. Medalia, the author of the report, a specialist in nuclear weapons policy, said in a telephone interview this week.

There were other factors to consider, he said, including wind direction, which was variable and therefore would tend to lower the effective increase in the radioactive material at the plutonium facility. Medalia said the value of relocating the trailer park would depend on the MAR increase that the move would permit, which would have to be weighed against the cost and disruption of the move.

A chart listing the potential contributions of various options for increasing the feasibility of reaching the accelerated rate of pit production notes that relocating Royal Crest might help the project in four ways:

LANL delivered its last pit on Aug. 17, 2011, completing an order of 29 war-reserve-quality plutonium pits for the W-88 warhead designed for Trident II submarine missile. A hiatus has followed, during which no new pits have been produced and a number of alternatives have been explored.

A previous CRS report by Medalia called the history since 1987 of the efforts to achieve pit production on a larger scale, “voluminous.”

“The key takeaways” Medalia wrote, are “(1) many projects have been proposed over the years; (2) none have been successfully completed; and (3) key parameters such as cost, schedule, proposed facility site and capacity have changed from one proposal to the next.”

The new report, “Nuclear Weapon ‘Pit’ Production: Options to Help Meet a Congressional Requirement,” offers 16 options for consideration, warning that a package of options will likely be necessary, whether they are drawn from this report or elsewhere

Another option proposed that instead of two or three separate modules at the plutonium facility, which have been suggested in recent proposals, one might suffice. That would be used for the most radioactive material, plutonium-238, which is employed mainly in providing energy for long-distance spacecraft.

One-quarter of PF-4’s current material at risk is attributed to PU-238, according to the report.

Additional questions about the report were referred by the LANL communications office to the National Nuclear Security Administration in Washington, which has not responded as of this publishing.