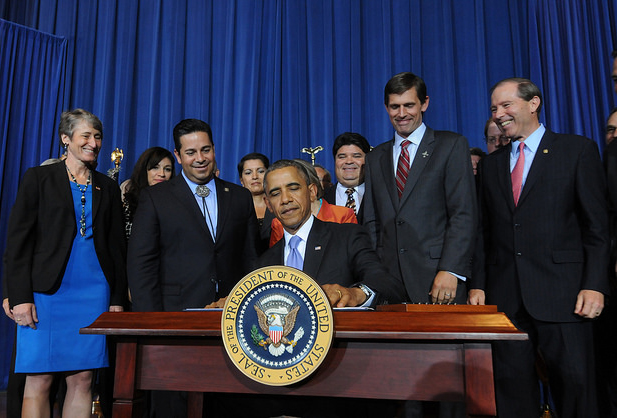 The Organ-Mountains. Photo by Mike Groves

Retired U.S. Senator Jeff Bingaman, U.S. Senators Tom Udall and Martin Heinrich, and community leaders from New Mexico joined the president and Secretary of the Interior Sally Jewell for the signing ceremony at the Department of Interior.

“The people of New Mexico and especially of Doña Ana County should be proud of the many years of work they put in to make this day a reality,” Bingaman said. “I commend the president, Secretary Jewell, and Senators Udall and Heinrich for helping to finally bring national and international recognition to the beauty of Southern New Mexico.” Bingaman began working with the local community to develop this proposal in 2007.

“New Mexico has a new national monument today, thanks to thousands of New Mexicans who worked as part of a grassroots effort. They spoke up and worked hard, and I want to say a big congratulations to them,” Udall said. “The newest national monument will put the unique and spectacular desert landscapes of Southern New Mexico on recreation maps around the world, attracting tourists to the region, creating jobs and bringing in millions of dollars in tourism revenue. It will preserve hiking, hunting and other recreation opportunities, and ensure Las Cruces’s beautiful backdrop will be protected for generations to come. I’m honored to join Senator Bingaman, Senator Heinrich, community leaders from New Mexico, Interior Secretary Jewell, and President Obama for this historic day.”

“Today is a historic day for New Mexico and our country,” Heinrich said. “The Organ Mountains-Desert Peaks National Monument will help protect Doña Ana County’s iconic backdrop while preserving cultural links to our past and boosting the region’s outdoor recreation economy. Our newest monument would not have been possible without the overwhelming support from the local community. I give my heartfelt gratitude to the diverse coalitions and stakeholders for getting this done and to Senator Jeff Bingaman for his work in pushing this effort many years ago. I also thank President Obama and Secretary Jewell for recognizing just how special this land is for all of us. I am proud to celebrate this momentous occasion.”

Udall and Heinrich introduced the Organ Mountains-Desert Peaks Conservation Act last December. Now that the Organ Mountains-Desert Peaks National Monument has been established by the president through the Antiquities Act, the New Mexico senators are pursuing legislation to finish their proposal for the area by designating eight new wilderness areas within the monument and releasing wilderness study area restrictions within five miles of the international border to give additional flexibility to Border Patrol officers working in the area. These provisions can only be accomplished through legislation, not a monument proclamation.

Establishing the Organ Mountains-Desert Peaks as a national monument is the culmination of a decade of involvement from the local community. It will permanently protect nearly 500,000 acres stretching across the Organ, Doña Ana, Potrillo, Robledo and Uvas mountains, home to many game animals, such as pronghorn sheep and deer, as well as rare plants and animals, some found nowhere else in the world.