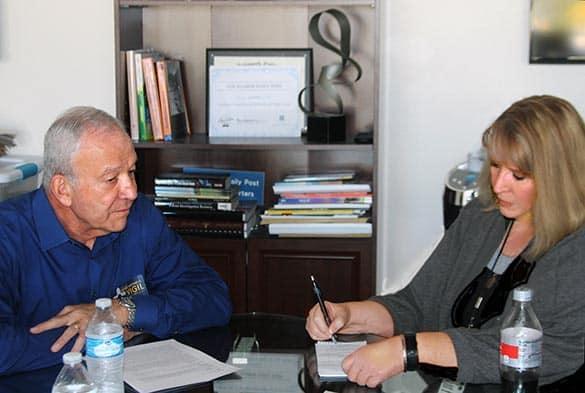 Judge Michael Vigil discusses his reasons for seeking a seat on the New Mexico Supreme Court during an interview last week with Publisher Carol A. Clark at the Los Alamos Daily Post. Photo by Bonnie J. Gordon/kadailypost.com

Judge Michael E. Vigil visited with the news team Sept. 22 at the Los Alamos Daily Post to discuss his candidacy for position one on the New Mexico Supreme Court.

He is credited with fighting to protect the rights of children, teachers and victims in general, workers’ rights and to increase individual protections. He also stresses the importance of keeping money out of judicial elections and is the only candidate for Supreme Court to seek and receive public financing.

Duiring his meeting at the Post, Judge Vigil spoke of a Constitutional Amendment that allows judges to hold dangerous people in jail pending trial.

“I’m the only candidate in the race with experience on this … I’ve had people in jail pending their trial and sat on dozens of such cases,” Vigil said.

He touched on the idea of whether the prosecution has the right to appeal when they think a sentence is too light.

“I’m not advocating for it, but I think it is something that should be looked at,” Vigil said.

Vigil discussed the importance of access to a quality education.

“Los Alamos is for the most part a highly educated community and the people of Los Alamos value the quality of a good education,” he said. “I’ve made sure on the Court that people of all socio-economic backgrounds have their fair share of education funds.”

He also mentioned how much he enjoyed attending a program on judicial science a couple of years ago at Los Alamos National Laboratory. The program brings judges from throughout the state and across the country to Los Alamos where they get immersed in scientific method and conduct hypothetical cases, he said.

In addition to practicing law, Judge Vigil followed in some of his family member’s footsteps and joined the military. He served in the National Guard where he served on a handful of critical missions, including the New Mexico State Penitentiary riot. After his National Guard service and 27 years as a practicing attorney, Judge Vigil was recommended by the independent bipartisan nominating commission and selected by Richardson for the vacancy on the Court of Appeals.

In June, members of the Democratic Party of New Mexico State Central Committee voted unanimously to place Judge Vigil as the Democratic Supreme Court nominee on the ballot for the November 2018 general election. This vacancy was created by the resignation of a Supreme Court justice after the primary filing deadline.

Vigil is a judge on the New Mexico Court of Appeals. He was appointed to the court in 2003 by Democratic Gov. Bill Richardson. He was elected in 2004 and re-elected in 2012 to a term set to end Dec. 31, 2020. Vigil was elected by his peers in 2015 to a two-year term as chief judge. He was a finalist for the vacancy on the Supreme Court, but ultimately Gov. Susana Martinez selected Judith Nakamura to fill the vacancy.

Vigil graduated in 1973 with a political science major and a history minor from the College of Santa Fe. He received his J.D. in 1976 from the Georgetown University Law Center.

Vigil began his legal career in 1976 as a staff attorney for the New Mexico Court of Appeals. He entered private practice in 1979, focusing on personal injury and medical malpractice. He was in private practice until his appointment in 2003 to the Court of Appeals. Vigil appears as appellate counsel in more than 50 published cases in New Mexico, including civil cases on torts, contracts, civil procedure, evidence, real property, worker’s compensation, statutory construction, condemnation, zoning, civil forfeiture, domestic relations, damages, insurance and securities. Criminal cases he argued on appeal include cases covering grand jury, search and seizure, double jeopardy, speedy trial, pre-indictment delay, right to counsel, evidence, privilege and sentencing issues.