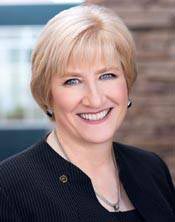 CHICAGO – Physicians gathered at the Annual Meeting of the American Medical Association (AMA) today voted for Barbara L. McAneny, M.D., an oncologist from Albuquerque, N.M., as the new president-elect of the nation’s premier physician organization.

Following a year-long term as president-elect, Dr. McAneny will assume the office of AMA president in June 2018.

“It is a deep honor and privilege to be elected a leader of an organization that is committed to serving as a strong physician voice and a dedicated patient advocate,” Dr. McAneny said. “The AMA will play a pivotal role in the changing health care environment as our nation confronts pressing health care issues. With vision and perseverance, I look forward to creating a brighter future for patients and the medical profession.”

Dr. McAneny has been an AMA board member since 2010, serving as board chair from 2015 to 2016. Prior to her election to the AMA board, Dr. McAneny served on the board for the American Society of Clinical Oncology (ASCO) and was the delegate to the AMA from ASCO. She has held many leadership roles in medicine including president of the New Mexico Medical Society (NMMS), president of the Greater Albuquerque Medical Association, and president of the New Mexico Chapter of the American College of Physicians. She served as chair of the AMA Council of Medical Service from 2009 to 2010.

A greatly respected leader at the state and local level, Dr. McAneny has received the New Mexico Woman on the Move Award in 2005 and Woman of Influence Award in 2009, and has been voted multiple times by her peers as Albuquerque The Magazine’s “Top Doc” in her specialty. At the national level, she has established a reputation as an innovator after being awarded a federal grant in 2012 to develop the Community Oncology Medical Home Model that demonstrates improved outcomes and patient satisfaction with reduced hospitalizations and costs.

In her spare time, Dr. McAneny’s cultivates her rose garden and travels with her husband, Steve.

About the American Medical Association

The American Medical Association is the premier national organization providing timely, essential resources to empower physicians, residents and medical students to succeed at every phase of their medical lives. Physicians have entrusted the AMA to advance the art and science of medicine and the betterment of public health on behalf of patients for more than 170 years. For more information, visit ama-assn.org.