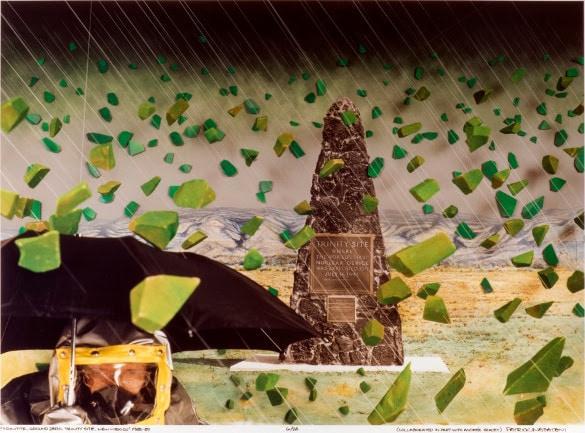 Patrick Nagatani, Trinitite Ground Zero, Trinity Site, New Mexico.
NMMA News:
SANTA FE — A survey of work by the Albuquerque-based artist and teacher Patrick Nagatani (1945-2017) that highlights the artist’s creative process and use of visual storytelling across his career opens at the New Mexico Museum of Art May 26, 2018 and will be on display through September 9, 2018.
A leading figure in the “directorial photography” style, Nagatani often constructed complex tableaus and detailed models for the camera to bring attention to truths that are often hidden in plain sight.
Nagatani’s early collaborations with painter Andrée Tracey involved the construction of elaborate and sometimes outlandish narrative scenes that had to be made on the spot in a studio with a 20 x 24-inch Polaroid camera. Two of the backdrops and one three-dimensional prop give viewers an idea of how the artists put together a tableau that was then photographed, using the largest Polaroid film available. The results are anything but seamless and a lot of fun, though they often touch on serious subjects.
“Patrick was pretty fearless in his approach to artmaking,” Katherine Ware, the museum’s Curator of Photography said. “It’s interesting to see a variety of work across his career and see the different forms that adventurousness took. And to see the consistency of the subjects he addresses in the work. He was an inspiring and beloved member of the photography community and he is greatly missed.”
The luscious color of the Polaroids is rivaled only by that of Nagatani’s influential New Mexico-based series Nuclear Enchantment. Several examples from this series are on view, one with a poem from the series written by Joel Weishaus to accompany the photographs. Three versions of the first image in the series, Trinitite Tempest, show the artist working out his ideas.
Nagatani was adventurous in his use of artistic materials, famously creating a series he called Tape-estries that combine photographs with multiple layers of masking tape. The exhibition will include one of these, with another on view in an upstairs exhibition.
One exception to Nagatani’s directorial approach to photography is his series Japanese American Concentration Camps. The artist, whose parents were interred in the camps during World War II, visited ten government Relocation Centers across the country and photographed them in a series of unmanipulated pictures.
As a longtime faculty member at the University of New Mexico in Albuquerque, Nagatani and his work had a lasting impact on students, colleagues, and community members, some of whom share their insights in extended labels about his works of art.
This exhibition is part of a collaborative effort between the Albuquerque Museum, the New Mexico Museum of Art and the University of New Mexico Art Museum to honor and celebrate the artistic contributions of Patrick Nagatani to the state of New Mexico. The Albuquerque presents Excavations from June 23-September 23, 2018. The UNM Art Museum presents Patrick Nagatani: A Survey of Early Photographs from April 27 – July 28, 2018.

Aspects of the show and related programs are in coordination with the New Mexico History Museum exhibition Atomic Histories and the Santa Fe Opera performance of Doctor Atomic.

In the galleries adjacent to the Nagatani show is Frederick Hammersley: To Paint without Thinking, a solo exhibition by another longtime New Mexico artist. Both artists came to Albuquerque to teach at the University of New Mexico and became integral to the art community, establishing legacies that continue to resonate locally and nationally. While Hammersley is known for his hard-edge paintings of geometric shapes and Nagatani is known for his elaborate constructions for the camera, both artists used color as one of their primary tools of expression. 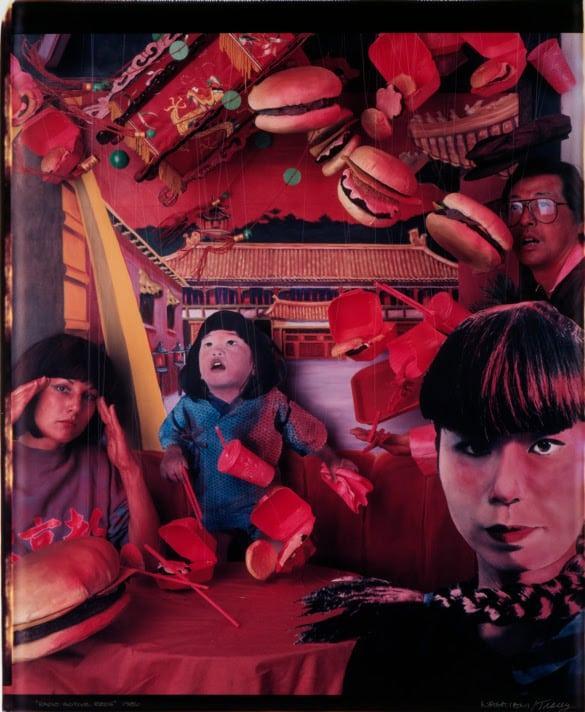