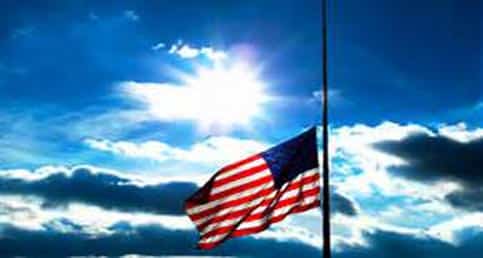 SANTA FE — Today, Gov. Susana Martinez issued an executive order for flags to be flown at half-staff from sunrise to sunset on Tuesday, Sept. 11, 2018 in honor and remembrance of the victims of the terrorist attacks on the United States on Sept. 11, 2001.

The text of the executive order is below:

EXECUTIVE ORDER 2018-044: FLAGS FLOWN AT HALF-STAFF IN HONOR AND REMEMBRANCE OF THE VICTIMS OF THE SEPTEMBER 11, 2001, TERRORIST ATTACKS

WHEREAS, 17 years ago, deadly terrorist attacks took place in the United States in New York City, Washington, D.C. and near Shanksville, Pennsylvania;

WHEREAS, these attacks cost the lives of nearly 3,000 people, and thousands more were injured, both Americans and citizens of dozens of other nations as well;

WHEREAS, 17 years later, we must continue to remember the victims of these attacks, and the loved ones they left behind;

WHEREAS, as New Mexicans and Americans, we must also be grateful for our emergency medical personnel, firefighters, and law enforcement officers, as well as those who serve our country in the United States Armed Forces, as they stand ready to serve our state and nation every day at home and abroad;

NOW, THEREFORE, I, Susana Martinez, Governor of the State of New Mexico, by the authority vested in me by the Constitution and Laws of the State of New Mexico, do hereby order that all flags be flown at half-staff from sunrise to sunset on Tuesday, September 11, 2018, in honor and remembrance of the victims of the terrorist attacks on the United States on September 11, 2001.

SIGNED AT THE EXECUTIVE OFFICE THIS 10TH DAY OF SEPTEMBER, 2018.

WITNESS MY HAND AND THE GREAT SEAL OF THE STATE   OF NEW MEXICO.