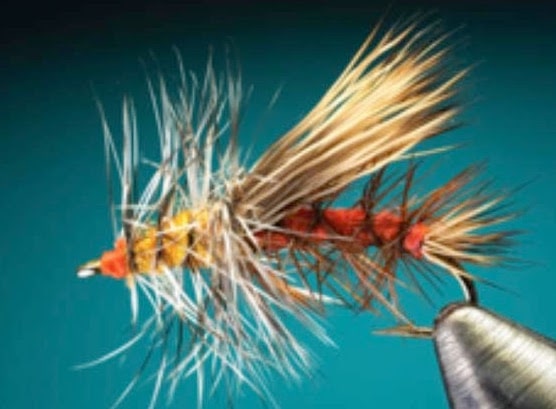 In this week’s report, Dustin talks about the versatile Stimulator fly. He also invited Chevy Wyatt, an avid young angler from Roswell, to share some fishing tips. And lastly, Dustin shares another tasty summer recipe.

Fly of the week – The Stimulator

This versatile fly works across New Mexico from high country streams and rivers to warmwater lakes. It is a large fly that resembles a variety of insects that fish love to eat. The Stimulator fly shares similarities with insects such as grasshoppers, stoneflies, moths, butterflies and other large terrestrial insects.

If you notice an abundance of large insects when fishing, then try the Stimulator fly.

When using the Stimulator fly, the presentation of a large insect is sometimes just too enticing for some trout to pass even when there are not a lot of large insects hatching at any given time. So, it is always worth a try.

To create a dropper setup, you first tie a Stimulator fly to the end of your fishing line. Next, tie about two-feet (more for deeper water) of leader to the hook of your Stimulator fly. At the end of the leader, tie on a subsurface fly. Generally good choices for subsurface flies are Pheasant Tail, Copper John, Golden Hares’ Ear, Red Annelid and various midge patterns. The idea is that if a fish bites your subsurface dropper fly, you will notice the movement of your Stimulator fly, similar to how a common bobber works.

With a dropper setup you are fishing two flies at once, the Stimulator on the surface and the dropper subsurface. Using floatant on your Stimulator fly is very important and will greatly improve the fly’s ability to stay afloat while working as a strike indicator and dry fly simultaneously.

Warmwater lakes, especially during the mornings and evenings, are a great place to try the Stimulator fly. Many panfish such as bluegill, crappie and perch eat a wide variety of insects as a large portion of their diets. Small to medium size bass also eat many insects.

The Stimulator fly works great around structure that provides fish habitat. Structure to look for includes fishing docks, submerged trees, brush, rocky outcroppings and other lakeside debris that provides cover. During the warmth of summer, there are often cicadas hatching around the lake. You might notice fish splashing on the surface as they feed on marooned cicadas and other insects.

The Stimulator fly is an excellent choice for trying to catch those fish feeding on the water’s surface. The excitement of watching a fish devour a top water fly is exceptional.

Here are the materials needed to tie a Stimulator fly:

Here is a video showing how to tie the Golden Stone Stimulator fly.

Chevy with an eight pound catfish he caught at Lake Van

There are many great anglers that routinely contribute to the Department’s weekly Fishing Report. This week, we are fortunate to share with you some tips and tricks from one of the regulars who has a knack for catching fish in southern New Mexico. Chevy Wyatt and his parents, of Roswell, are an avid fishing family.

Chevy, age 12, loves fishing for just about anything that pulls on his fishing line. He dreams about fishing as many lakes and rivers as possible. There is little doubt that Chevy will not catch a fish wherever he goes. He is the kind of young man who can catch a fish in a mud puddle.

Here are a few of Chevy’s go-to fishing holes in southern New Mexico, and a few techniques he wants to share with his fellow anglers.

Chevy with a four pound bass he caught at Berrendo Lake

I pay close attention to the water for activity. Jumping minnows tell me that larger fish are in the area.

My favorite trout bait is salmon peach PowerBait with glitter. I also like to use small spinners for trout.

My favorite catfish bait is chicken breast. It stays on the hook the best, especially when I cast for the stars (long cast).

I pay very close attention to my line once casted. A strong tug is a good bite. Small taps mean the fish might just be playing or investigating my bait. The line going slack means the fish is bringing the bait closer to me.

Fishing for bass, I like to try all types of lures including plastics, spinners and crawdad imitations. Using a Texas rigged Senko worm always does the job for me.

When you release a fish, always make sure to release it away from where you are fishing. You do not want to disturb the other fish that you have yet to catch.

I always make sure my fishing line is in good condition. I’ve lost big fish on weathered line. That won’t happen again…

Always remember to be patient. You will often get a hit when you’re least expecting it.

When hooked to a big fish, loosen your drag and tire them out. Never rush a big fish. 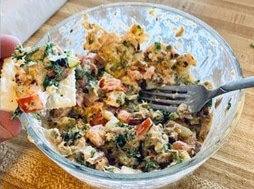 Back in June, Marcus McCoy submitted a trout salad recipe for people to try.

I could not wait to try the recipe; I found some smoked salmon in the freezer and put it to good use with this recipe.

Here’s what I used to make the salmon salad.

By the way, I am now hooked, this is my new favorite way to prepare salmon.