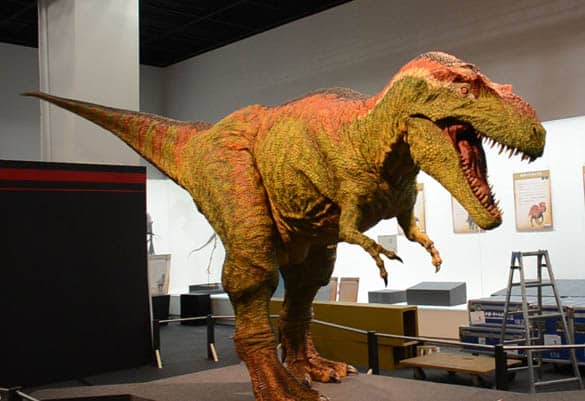 Opening day of the ‘A Great Journey of Dinosaurs’ exhibit at the Fukui Prefectural Dinosaur Museum, Fukui, Japan, July 7, 2016, in front of the animatronics Bistahieversor sealeyi, a tyrannosaur dinosaur known only from New Mexico. Photo by Thomas Williamson
NMMNHS News:
ALBUQUERQUE ― New Mexico dinosaurs and other extinct reptiles drew huge crowds in Japan, during a yearlong three-city tour of the nation. During a collective 218 days on exhibition at three venues, the exhibition drew more than 588,000 visitors.
“The Japanese we worked with combined cutting-edge robotics technology to create a mesmerizing, life-size reconstruction of the New Mexico dinosaur Bistahieversor that left me speechless,” said Thomas Williamson, Ph.D, Museum Curator for the New Mexico Museum of Natural History and Science.
Working with the Fukui Prefectural Dinosaur Museum and the Yomiuri Shimbun (Newspaper), the New Mexico Museum of Natural History & Science (NMMNHS) loaned seven paleontological specimens and three casts to the Fukui Prefectural Dinosaur Museum as part of a traveling exhibition which ended in September at a museum outside of Tokyo.
High-tech, cutting-edge high-tech and one-of-a-kind, The Great Journey of Dinosaurs exhibition first appeared at the Fukui Prefectural Museum, Fukui, Japan from July 8, 2016 through Oct. 10, 2016. During the 95-day showing in Fukui, the exhibition was seen by 237,603 people, the largest draw ever for a special exhibition at the Fukui Prefectural Dinosaur Museum.
Specimens loaned for exhibition include Late Triassic (about 220 million years old) fossils such as bones and casts of the early dinosaur and New Mexico state fossil, Coelophysis, a nearly complete skeleton of the armored reptile Typothorax, and the skulls of two crocodile-like, phytosaurs. The museum also loaned a partial skull of the Late Cretaceous (about 74 million years old) horned dinosaur Pentaceratops.
“Great Journey of Dinosaurs” was exhibited in Nagoya, the fourth largest city in Japan, for sixty days, at the Nagoya City Science Museum, Aichi Prefecture from March 18, 2017 through May 28, 2017 where it drew a crowd of 99,220. Nagoya City Science Museum show featured materials from NMMNHS, the Institute of Vertebrate Paleontology and Paleoanthropology, Beijing, the Zhejiang Museum of Natural History along with collections from the Fukui Dinosaur Museum which produced the exhibition.
NMMNHS Director Margie Marino and Williamson traveled to the opening of the exhibition in both Fukui and Nagoya to join in the ribbon-cutting and celebration as well as ensure the safety of the collection as it was packed and moved from place to place.
The third and final exhibition closed in September at the Makuhari Messe Convention Center, Chiba City, Tokyo, drawing a crowd of 252,000 between July 15 and September 5, 2017. The Giga Dinosaur Exhibition 2017 featured the characteristic environment and lifestyle of dinosaurs that flourished on the Earth in the Mesozoic Era from approximately 230 million to 66 million years ago. This leg of the exhibition was organized by the Yomiuri Shimbun (Newspaper) and the Makuhari Messe Convention Center and was sponsored by the Embassy of the People’s Republic of China in Japan, Chiba Prefecture.
“We watched well over 100 workers putting the exhibition together the day before press day,” said Museum Director Marino. “The opening celebration included digintaries from Japan, China, and New Mexico.”
“This collaboration with the Japanese was a thoroughly positive and mutually beneficial opportunity both financially and diplomatically, done with minimal cost to the State of New Mexico or the Museum of Natural History Foundation,” said New Mexico Department of Cultural Affairs Cabinet Secretary Veronica Gonzales. “It underscores the fact that New Mexico’s paleontological resources are world-wide news and the New Mexico Museum of Natural History and Science collections are world-renown. The global appeal of our State’s dinosaur fossils was evidenced once again recently by a story that made international headlines when Los Alamos National Laboratory’s released its report on the recent scanning of the Bisti Beast skull, or a couple of years back when we airlifted the Juvenile Pentaceratops fossil out of the Bisti badlands.”
“These New Mexico Museum of Natural History & Science collections have been safely packed up and shipped home after being seen by hundreds of thousands of people and adds to the Museum’s prestige and impact,” Marino said. “And, the Japanese have expressed a great willingness to continue to work with this Museum. We were very pleased with the effort they made to highlight the New Mexico collections loaned during this collaboration.”
In Spring of 2016, curators at the Fukui Prefectural Museum in Fukui Japan and the Yomiuri Shimbun newspaper (sponsors of the exhibition) asked if NMMNHS would loan them several items from our collections to create a traveling exhibition to tour Japan for a little over a year.
“Our Japanese friends were very serious about their desire to feature the Museum’s collections in the exhibition and after deliberation the Museum Board of Trustees agreed. While the Museum’s primary focus is keeping collections in New Mexico for residents to study, learn from, and enjoy, we could see substantial future benefit to the State in collaborating with Japanese museums,” said Secretary Gonzales who traveled to Chiba City, Japan to cut the ribbon for the exhibition’s final opening ceremony.
“This collaboration has already launched discussions about possible future exchanges, including an exhibition like this one coming to New Mexico from Japan,” Gonzales said.
Menu
LOS ALAMOS