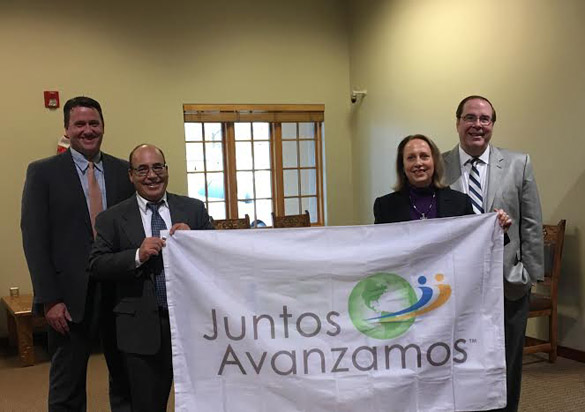 Courtesy photo
STATE News:
ALBUQUERQUE ― Early this week, two New Mexico credit unions became the first credit unions in New Mexico to earn the Juntos Avanzamos designation, which formally recognizes credit unions in the U.S. that specifically tailor financial products and services to serve low-income, Hispanic communities.
The designation was conferred upon Rio Grande Credit Union and Guadalupe Credit Union on Monday, at separate ceremonies.
U.S. Rep. Michelle Lujan Grisham, NM Sen. Michael Padilla, Bernalillo County Commissioner Art de la Cruz, and Mexican Consulate Lic. Helder Manuel Lopez Calvo were in attendance at the Rio Grande CU flag raising ceremony, and helped Rio Grande Credit Union’s president and CEO, Chris Fitzgerald, to welcome the community in celebrating the designation at its Albuquerque South Valley location on Monday.
Mexican Consulate Lic. Lopez Calvo shared that, when he was in Orlando, banks “embraced deposits but wouldn’t provide loans to Mexicans,” so he felt they “only wanted to take from them without providing anything back,” and so were no longer welcomed at the Consulate.
Fitzgerald noted that “the Juntos Avanzamos designation validates all of the hard work Rio Grande Credit Union puts into serving both the Hispanic and the underserved communities. It is part of our mission to educate our membership on financial health in order to help them grow and prosper. Having everyone out to celebrate the flag raising made for a memorable occasion.”
Guadalupe Credit Union also held a ceremony to celebrate the Juntos Avanzamos designation at which Winona Nava, Guadalupe Credit Union president and CEO, and NM Senator Richard Martinez welcomed friends, the community, and supporters.
Sen. Martinez congratulated Guadalupe CU on its’ achievement and even re-opened an account while he was in attendance. The ceremony was held at Guadalupe CU’s new Espanola branch.
For its’ part, Guadalupe Credit Union “has been focused on financial inclusion for the Hispanic community for many years, and we are very pleased to be receiving the Juntos Avanzamos award for our hard work,” Nava said. “Flying the Juntos Avanzamos flag is a tangible way to show that we provide asset-building opportunities and access to affordable and responsible financial products and services to everyone who needs them.”
According to the most recent FDIC data, slightly more than one in ten households in the Albuquerque metro area (or, 11.1 percent) had no bank accounts, and more than a third of households do little or no mainstream banking.
As Juntos Avanzamos-designated credit unions, both Rio Grande Credit Union and Guadalupe Credit Union help to address the unique financial needs of this largely Hispanic demographic.
Both credit unions offer products and services specifically designed to increase financial literacy in the Hispanic community.
Launched in 2005 by Cornerstone Credit Union League as an immigrant outreach program, Juntos Avanzamos (Together, We Advance) was designed to help credit unions attract and appropriately serve the growing Hispanic market, and is a designation for credit unions that are committed to serving and empowering this demographic.
The program initially focuses on the Southwest, where it is supported by the California/Nevada Credit Union Leagues, the Credit Union Association of New Mexico, and Mountain West Credit Union Association.
Menu
Los Alamos
54°
Fair
6:55am4:51pm MST
Feels like: 54°F
Wind: 0mph SSE
Humidity: 23%
Pressure: 30.36"Hg
UV index: 0
MonTueWed
59/36°F
59/36°F
59/36°F
Weather forecast Los Alamos, New Mexico ▸