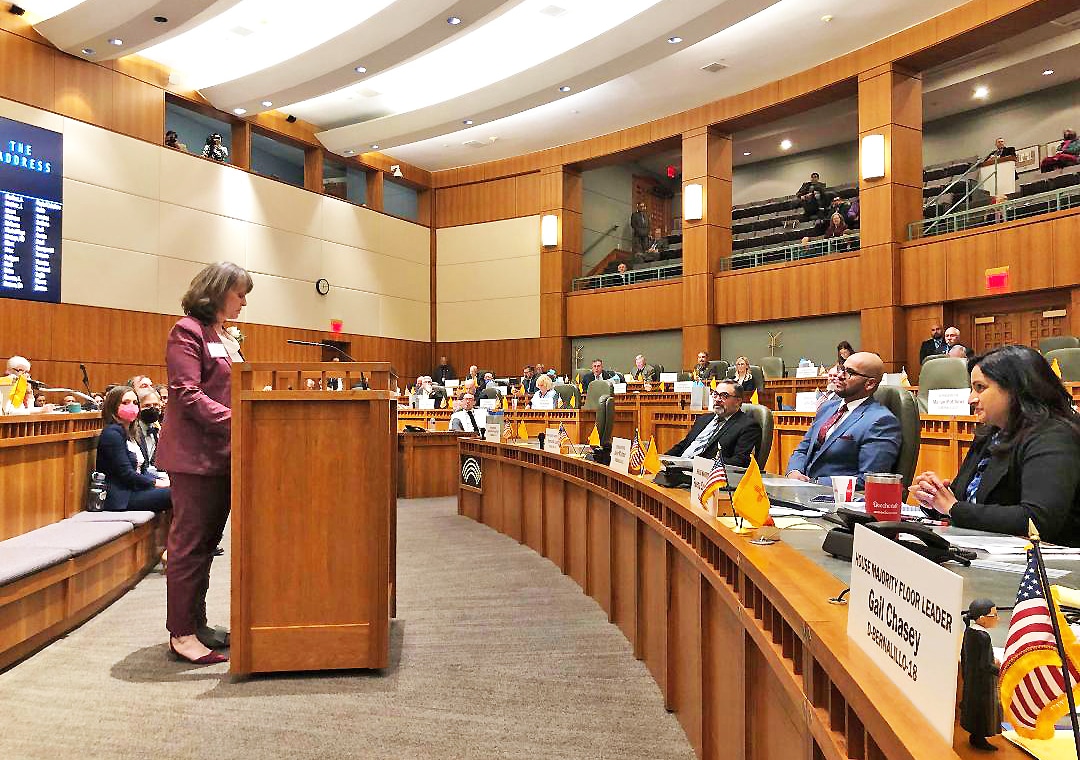 From the Administrative Office of the Courts:

“…When I think to myself, ‘What is the state of the Judiciary?’, I easily come to the following: The Judiciary is battered and bruised, strong, resilient, creative, committed, and caring,” Chief Justice Bacon told legislators during a joint session of the state House of Representatives and Senate. Click here for a copy of her prepared remarks.

It was the first time in four years that the leader of New Mexico’s judicial branch of government appeared  before the Legislature to deliver what traditionally has been a biennial address.

Chief Justice Bacon told lawmakers that state courts remained open during the COVID-19 pandemic to meet the legal needs of New Mexicans. Courts adapted to public health restrictions by using technology to conduct many proceedings remotely through online platforms, lessening the need for people to travel to courts and appear in person at hearings. In the past four years, state courts have conducted more than two million hearings and non-jury “bench” trials.

Several judicial programs and initiatives were outlined to legislators, including the court-based Eviction Prevention and Diversion Program that assisted tenants and landlords, self-help centers in courthouses to serve people without lawyers and a recently launched telephone service that offers free legal assistance on civil matters to moderate income New Mexicans. The Modest Means Helpline was developed through collaboration between the State Bar of New Mexico, the Supreme Court’s Access to Justice Commission and Rep. Pameyla Herndon, an attorney from Bernalillo County.

On the topic of crime, the chief justice highlighted successful efforts by courts to streamline procedures to expedite criminal cases and help law enforcement, witnesses and victims avoid the need to appear at multiple hearings.

“We can all agree that law enforcement is stretched thin and that measures to keep them on the streets rather than waiting for court proceedings are important,” Chief Justice Bacon said.

Legislators are expected to consider many criminal justice proposals this session and the Chief Justice urged lawmakers to “make your policy decisions based on what the Constitution mandates, and on verified data and facts,” and to consider the potential costs – “both fiscal and human” – of those decisions.

“Criminal justice reform, no matter what path you choose, is very expensive — it cannot be based on what we, for years, have called adequate funding. The funding needs to be robust,” Chief Justice Bacon said. “The funding must provide for the Judiciary, the public defenders, district attorneys, law enforcement, corrections, county jails and behavioral health – all of which struggle to meet the demands of our system today.”

Addressing the “human impact” of crime, Chief Justice Bacon said: “We all feel deep sorrow and fear when we read about a senseless death and other tragedies from crimes. Yet, we must remember why our Constitution protects the rights of every person, including those accused of a crime. They are just that – accused, and presumed innocent in the eyes of the law.”

The Chief Justice cited a 2019 case in which a 17-year-old high school student in Albuquerque was charged with murder, armed robbery and other crimes. Prosecutors sought to hold her in jail while awaiting trial, but a judge denied the request. She spent a week in jail before her case was dismissed. Her arrest occurred because of a mistaken identification.

“This is an example of the human impact on the wrongfully accused,” Chief Justice Bacon said.

She outlined legislative proposals that are priorities of the Judiciary. Those include improving judicial salaries to help recruit lawyers with diverse legal experience to become judges and retain high quality state court judges.

“The Judiciary is dependent on you, this Legislature, to ensure that we have sufficient resources to enforce laws and provide equal access to justice. With your help, the Judiciary is prepared to evolve, adapt, and continue to be the cornerstone of our democracy,” Chief Justice Bacon said.