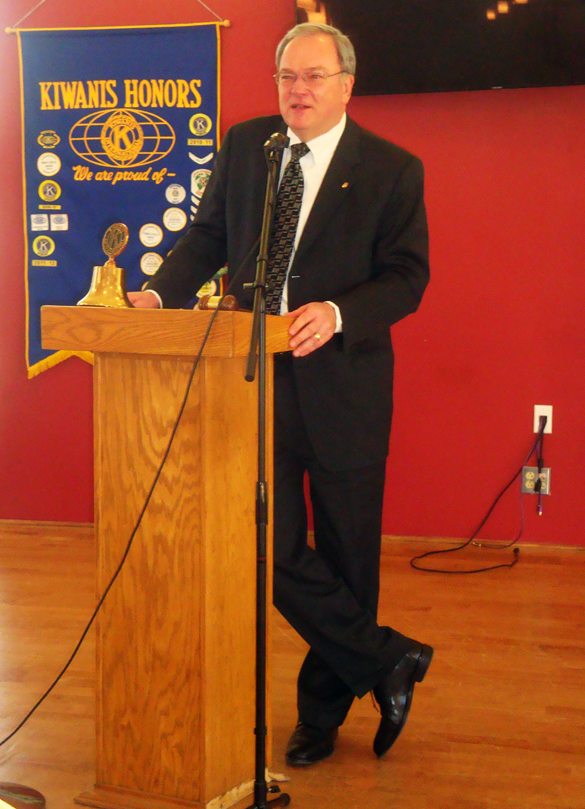 John Gulas, the new president and chief executive officer of Los Alamos National Bank (LANB), and Rod Pittman, LANB’s new chief administrative officer, visited the Kiwanis Club of Los Alamos March 3, telling the club that the bank is strong and has a good future ahead.

Gulas said, “The bank is doing well.” He added that it is “extremely committed to this community,” and currently has an 86 percent share of the community’s banking business. It will be “here to serve,” he said, as long as he has any say in the matter.

He also noted that LANB has had branches in Santa Fe for nine years and has achieved a 21 percent share there. Only Wells Fargo has a larger share in Santa Fe at 23 percent, he said. And now, LANB has offices in Albuquerque as well.

Both Gulas and Pittman have Ohio ties. Gulas spent 30 years in banking in the Middle States. LANB is the third bank where he has served as CEO. He commented, “I prefer being a community banker.” Pittman has bought a home in Los Alamos and is moving here from Santa Fe.

Gulas, who has been married for 26 years and has two daughters in their 20s away at college, went hiking on Pajarito Mountain recently, and he joked that, after a steep uphill trudge, he found that he is still adjusting to the altitude here, even though he has been here since June 2, 2014.

Gulas said that customers, employees, shareholders and the community are “the four pillars of our banks.” The three basic things that LANB does, he said, are to collect deposits, make loans, and develop strategies, and, he added, “We are lending.”

At present, he said, LANB is dealing with 2,300 pages of new rules that have come into effect since the recession started in 2008. He noted that 12,000 banks existed when the recession began, but that number is down to 6,000 today. However, he said, “We are learning how to deal with those new rules,” and he believes that, “Interest rates will be going up” this year.

Gulas responded to a number of Kiwanis questions.

Barbara Stoddard asked when he expects that shareholders will begin receiving dividends again. He said that will happen when the bank gets beyond the existing consent order under which it now operates. (The consent order was entered into by LANB and the Office of the Comptroller of the Currency Dec. 17, 2013.) Gulas said, “We’re catching up all the financials now … We’re going to be profitable this year.” He will be going to Denver soon, he said, to talk to federal officials.

Pat Soran asked, “Why did this all happen?” Gulas said the bank “didn’t follow all procedures,” and he noted again that a lot of new regulations were established after the recession hit.

Cheryl Pongratz asked whether the expansion of the bank to other communities is “positive or negative?” Gulas said, “I think it’s positive.” He noted that in the past, the Los Alamos County economy has been tied very closely to Los Alamos National Laboratory. The bank needed to diversify, he said.

Roger Stutz asked, “When do you expect to have positive financials?” and Gulas said, “This year.”

Ann Hayes noted that in the past, the bank has played a philanthropic role in the community, and Gulas said he plans to continue that role.

He wants to “get the right people on the bus, get them in the right seats, and see that they stay laser-focused,” he said.

Asked whether the staffing level is up or down, he said that it is down. The bank is “fine-tuning,” he said.

Kiwanian Rick Reiss, a member of the County Council, asked about LANB’s on-line banking. He said that it is “a strong suit,” and he added, “I hope we won’t see any changes.” Gulas said, “I think you might be pleasantly surprised at what’s out there.” Mobile banking will be changing, he said.