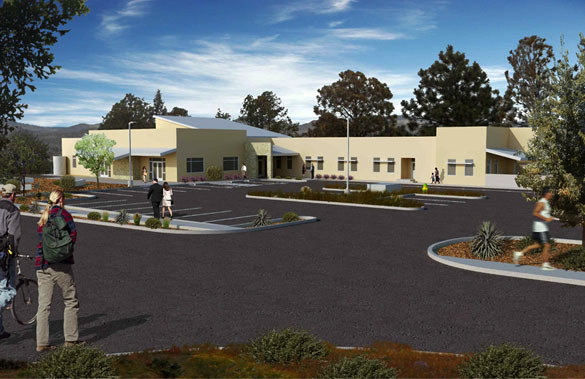 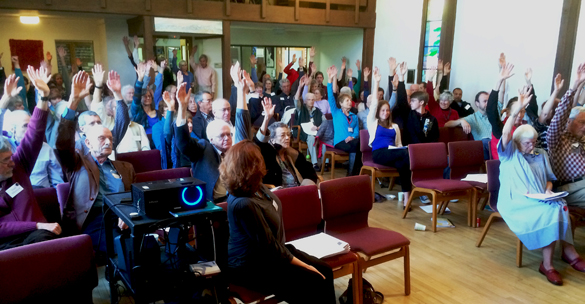 Vote: Church members raise their hands in affirmation of the new building project. There were two abstentions, but zero ‘no’ votes of the 90 members present. Photo by Rev. John Cullinan

The congregation of the Unitarian Church of Los Alamos will soon have a new church building. After seven years of preparation, the congregation voted overwhelmingly Sunday to go ahead with the project, starting demolition in just a few short weeks.

“I’m thrilled that everyone’s hard work and dedication has brought us to this point,” Rev. John Cullinan said. “I look forward to having a new church home where we can literally throw our doors wide open and welcome all who want to work with us to build a more inclusive and compassionate community.”

The new building, designed by Mullen|Heller Architecture, will be built on the site of the current church, located on North Sage Street between the Latter-Day Saints and the Masonic Lodge. It is scheduled for completion by March 1, 2016.

Mullen|Heller Architecture also designed the new PEEC Nature Center building and the White Rock Visitors Center. Hart Construction submitted the winning bid as the General Contractors for the project, which will have a total cost of $3.45 million. The congregation has raised more than $2.8 million in pledges, and fundraising is ongoing.

“It is exciting to think that we will be in our new building at this time next year,” said Building Project Steering Committee Chair Galen Gisler before the final vote was taken.

During construction, the congregation will hold all operations at their temporary headquarters in Suite 101 of the TRK Building at 195 East Road, across from the Animal Shelter.

Next Sunday, April 26, the Rev. John Cullinan will conduct a “farewell” service in the current church building. The following Sunday, May 3, will be the congregation’s first worship service in their temporary space at TRK. Sunday services begin at 10:30 a.m. and all are welcome to attend.

The new church will retain the beautiful mountain view from the sanctuary, which will be situated in approximately the same location on the lot as it is now. The sanctuary will increase in size from a current capacity of approximately 110 seats to 175. Addressing the congregational meeting Sunday, Emeritus Minister Dale Arnink said, “There is lots of room to grow. There is room for each of you and any friends you want to bring.”

The building will be one-story and fully accessible, and will offer many amenities for outside groups renting space for their activities.

Some artifacts from the building will be salvaged by the Los Alamos Historical Society for inclusion in their archives, and other materials will be donated to the Habitat ReStore before asbestos abatement and demolition begin. 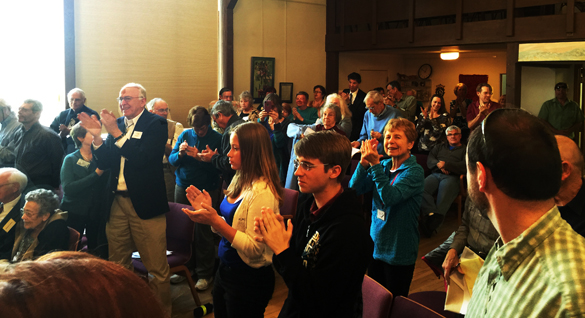 Church members celebrate the positive vote with a standing ovation and many cheers. Photo by Mike Begnaud 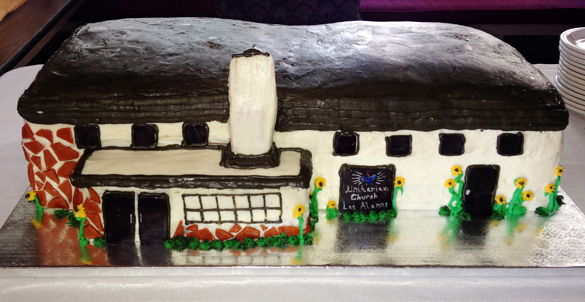 A specially commissioned cake for the celebration of the new building project at the Unitarian Church. Photo by Mike Begnaud
Menu
LOS ALAMOS