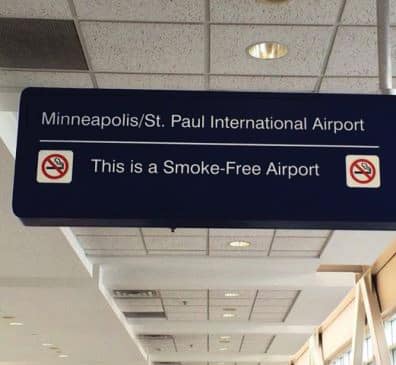 The report published in today’s Morbidity and Mortality Weekly Report (MMWR) is the Centers for Disease Control and Prevention’s first assessment of smoke-free policies in the world’s airports. More than 2.7 billion passengers annually pass through the airports included in the study.

“The Surgeon General has concluded there is no risk-free level of secondhand smoke exposure‎,” said Corinne Graffunder, D.Ph., M.P.H., director of CDC’s Office on Smoking and Health. “Even brief exposure can have health consequences.”

“Separating smokers from nonsmokers, cleaning the air, and ventilating buildings cannot eliminate exposure of nonsmokers to secondhand smoke,” said Brian King, Ph.D., Deputy Director for Research Translation in the Office on Smoking and Health. “People who spend time in, pass by, clean, or work near these rooms are at risk of exposure to secondhand smoke.”