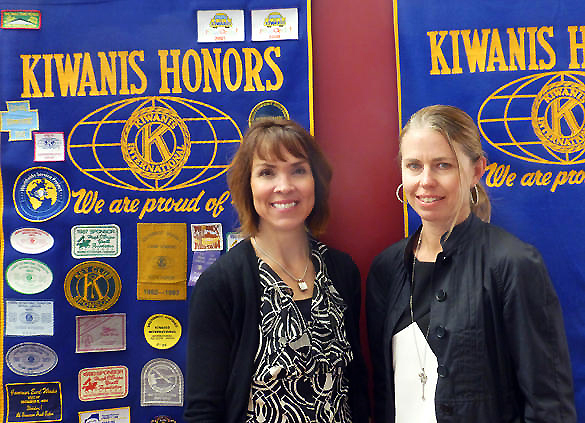 Children in the fifth and sixth grade have problems, just as older kids and adults do – and they are not always comfortable seeking out an adult to talk about solutions.

At Barranca Mesa Elementary School, Audrey Juliani (who teaches fifth grade) and Nicole McGrane  (who teaches sixth grade) decided that the best way to give troubled kids a friend for the rainiest of days is to train their trusted peers in counseling.

As a result, Juliani, McGrane and others built a “Natural Helpers” organization at Barranca. During the April 15 Kiwanis Club of Los Alamos meeting, Juliani and McGrane spoke about the steps that went into establishing the program and its success so far.

The two teachers began by doing a survey at Barranca, seeking nominations from their students to compile a list of kids who were seen by their peers as being “helpful, honest, and safe” (trustworthy in keeping confidences). Juliani said she and McGrane also met with the school counselor (who had been a Natural Helper herself when she was in high school), with the nurse, and with the principal.

Next, the organizers of the program combed through the nominees and selected five fifth graders and 10 sixth graders to be the first Natural Helpers at Barranca. They made sure that people from all identifiable groups at the school were included among those chosen. They checked with parents and made sure that each potential Helper was committed before formally recruiting him or her.

They held a retreat to teach the 15 new Natural Helpers the art of assistance. They worked on team building. And they established a meeting time each Friday at lunch for participants to get together and work on their skills.

Now, almost a year later, they feel that they have had some success and learned a lot.

For example, they gathered useful information just by including in their initial survey a question about areas of concern among their students. “Achievement” topped the list, but the list of issues students were facing also included bullying, self-harm (cutting), suicide, peer relations, hazing within sports, trouble at home (including problems with siblings and alcoholism among adults), and Internet interactions of concern.

“We’ve had some big issues,” Juliani  said. Online bullying was one of them. Juliani had to take it to the school counselor. Now, she said, students at Barranca know who to talk to when they are facing this problem.

The organizers trained their Natural Helpers to assist each distressed student by expressing concern, listening, exploring options to solving each problem, predicting consequences, finding out what the anxious friend might do, expressing support, following up on the initial conversation, and, in some cases, asking directly “Is suicide on your mind?” If the answer to that last question is “yes,” their training says, they should seek adult help.

In conjunction with the new program, the organizers also conducted a few projects to make life more enjoyable at Barranca. They encouraged “pencil grams” ─ the giving of pencils as gifts to brighten other students’ days. They involved students and helpful adults (including an artist) in making over the Barranca entry area. And they began working on a project to beautify and landscape a plot of land at Barranca.

Next year at Barranca, they plan to keep the Natural Helpers they have trained and recruit more.

Los Alamos High School also has a Natural Helpers program, but the other schools in Los Alamos and White Rock do not. Juliani noted that the stress level at the high school is very high because of concerns about graduation, college, and the selection of a career. She thinks it would be valuable for Los Alamos County students to learn “tools” to help with such stressers even before they reach high school. She would especially like to create a program at Los Alamos Middle School. “That’s a tough age,” Juliani said.

All of the other local  elementary schools have already expressed interest in the program.