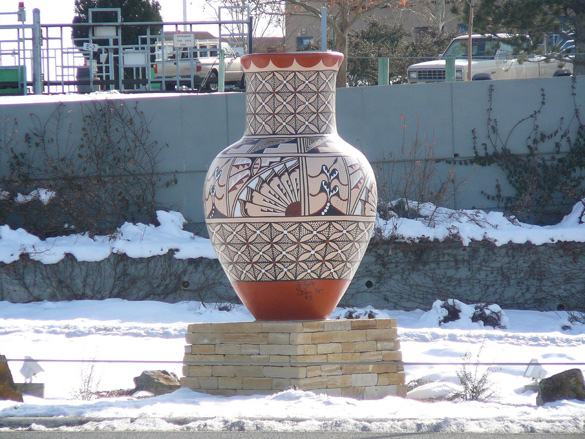 Similar pots to this one at the Albuquerque Sunport have been suggested for N.M. 4 in White Rock. Courtesy photo

It has been a long time in the making, but an art proposal by the Los Alamos Art in Public Places Board (APPB) is now ready for public input.

First suggested by the White Rock Master Plan Implementation Committee when the new Visitor Center was still under construction, the project involves placing a series of six large Native American pottery replicas – like those at the Albuquerque airport – along the N.M. 4 corridor through White Rock.

The concept, now fully developed, involves a historical progression of pottery styles associated with San Ildefonso Pueblo, from prehistoric to contemporary. The concrete pot forms would be produced by the same firm that made the ones in Albuquerque, and a group of San Ildefonso artists, descendants of the original inhabitants of the Pajarito Plateau, would select authentic ancestral designs and paint them on the replicas.

The pieces would range in size from four feet tall to an eight foot diameter plate in the style of Maria Martinez, and would be distributed along both sides of N.M. 4.

Project costs are anticipated to run between $100,000 and $140,000. Sufficient funds are available in the Art in Public Places account, which was created by an ordinance that sets aside 1 percent of the cost of Capital Improvement projects (1/2 percent of road projects) for public art in Los Alamos County.

The APPB is tasked with making art recommendations to the County Council, which has final authority on expenditures from the account. Public input is an important consideration in the decisions of the Art Board and County Council, and there are two ways for the public to comment on this project.

Art Board members will be present with comment cards at 11 a.m. July 31, at the Grand Opening of the White Rock Branch Library and comments will be accepted via the County’s Open Forum from July 24 through Aug. 3.