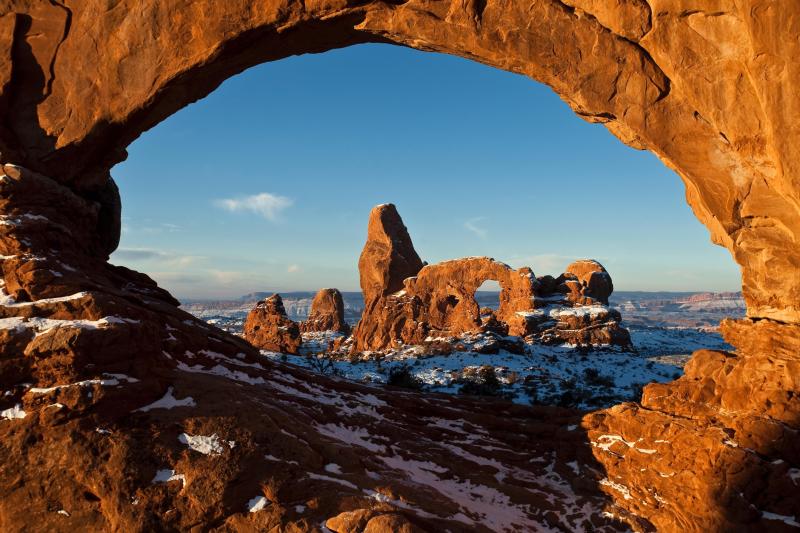 Turret Arch and North Window are two of the massive stone arches at the Windows Section in Arches National Park Utah. Photo by NPS/Jacob W. Frank

The National Park Service turns 100 years olds today and everyone can take part in the celebration.

The centennial kicks off a second century of stewardship of America’s national parks and engaging communities through recreation, conservation and historic preservation programs.

The National Park Service invites the nation to find a park and discover the national parks and programs in their own backyard. Park entry is free through this weekend across America.

Aztec – Pueblo people describe this site as part of their migration journey. Today you can follow their ancient passageways to a distant time. Explore a 900-year old ancestral Pueblo Great House of over 400 masonry rooms. Look up and see original timbers holding up the roof. Search for the fingerprints of ancient workers in the mortar. Listen for an echo of ritual drums in the reconstructed Great Kiva.

Los Alamos – Bandelier National Monument protects over 33,000 acres of rugged but beautiful canyon and mesa country as well as evidence of a human presence here going back over 11,000 years. Petroglyphs, dwellings carved into the soft rock cliffs, and standing masonry walls pay tribute to the early days of a culture that still survives in the surrounding communities.

Carlsbad – High ancient sea ledges, deep rocky canyons, flowering cactus and desert wildlife – treasures above the ground in the Chihuahuan Desert. Hidden beneath the surface are more than 119 known caves – all formed when sulfuric acid dissolved the surrounding limestone leaving behind caverns of all sizes. **Check out our new “Park Ranger Blog” feature! Learn all about the park from a ranger’s viewpoint.

Nageezi – Today the massive buildings of the ancestral Pueblo peoples still testify to the organizational and engineering abilities not seen anywhere else in the American Southwest. For a deeper contact with the canyon that was central to thousands of people between 850 and 1250 A.D., come and explore Chaco through guided tours, hiking and biking trails, evening campfire talks, and night sky programs.

Grants – The richly diverse volcanic landscape of El Malpais offers solitude, recreation, and discovery. Explore cinder cones, lava tube caves, sandstone bluffs, and hiking trails. Wildlife abounds in the open grasslands and forests. While some may see a desolate environment, people have been adapting to and living in this extraordinary terrain for generations. Come discover the land of fire and ice!

Ramah – Imagine the comfort and refreshment of finding water after days of dusty travel. A reliable waterhole hidden at the base of a sandstone bluff made El Morro (the headland) a popular campsite for hundreds of years. Here, Ancestral Puebloans, Spanish and American travelers carved over 2,000 signatures, dates, messages, and petroglyphs. We invite you to make El Morro a stopping point on your travels.

Watrous – Exposed to the wind, within a sweeping valley of short grass prairie, amid the swales of the Santa Fe Trail, lie the territorial-style adobe remnants of the largest 19th century military fort in the region. For 40 years, 1851-1891, Fort Union functioned as an agent of political and cultural change, whether desired or not, in New Mexico and throughout the Southwest.

Silver City – For thousands of years, groups of nomadic people used the caves of the Gila River as temporary shelter. In the late 1200’s, people of the Mogollon Culture decided it would be a good place to call home. They built rooms, crafted pottery and raised children in the cliff dwellings for about twenty years. Then the Mogollon moved on, leaving the walls for us as a glimpse into the past.

Manhattan Project National Historical Park, New Mexico, Washington, Tennessee – This site tells the story about the people, events, science and engineering that led to the creation of the atomic bomb, which helped end World War II.

Follow the routes of mule pack trains across the Southwest on the Old Spanish National Historic Trail between Santa Fe and Los Angeles, Calif., New Mexican traders moved locally produced merchandise across what are now six states to exchange for mules and horses.

Pecos – In the midst of piñon, juniper, and ponderosa pine woodlands in the Sangre de Cristo Mountains not far from Santa Fe, the remains of Indian pueblos stand as meaningful reminders of people who once prevailed here. Now a national historical park demonstrates to modern visitors the cultural exchange and geographic facets central to the rich history of the Pecos Valley.

Albuquerque – Petroglyph National Monument protects one of the largest petroglyph sites in North America, featuring designs and symbols carved onto volcanic rocks by Native Americans and Spanish settlers 400 to 700 years ago. These images are a valuable record of cultural expression and hold profound spiritual significance for contemporary Native Americans and for the descendants of the early Spanish settlers.

Mountainair – Tucked away in the middle of New Mexico you’ll find Salinas Pueblo Missions National Monument. The three sites offer a glimpse into a unique time in history. A time entrenched with cultural borrowing, conflict, and struggles. The now abandoned sites stand as reminders of the Spanish and Pueblo People’s early encounters.

Jemez Springs – About 1.25 million years ago, a spectacular volcanic eruption created the 13-mile wide circular depression now known as the Valles Caldera. The preserve is known for its huge mountain meadows, abundant wildlife, and meandering streams. The area also preserves the homeland of ancestral native peoples and embraces a rich ranching history.

Alamogordo – Rising from the heart of the Tularosa Basin is one of the world’s great natural wonders – the glistening white sands of New Mexico. Great wave-like dunes of gypsum sand have engulfed 275 square miles of desert, creating the world’s largest gypsum dunefield. White Sands National Monument preserves a major portion of this unique dunefield, along with the plants and animals that live here.