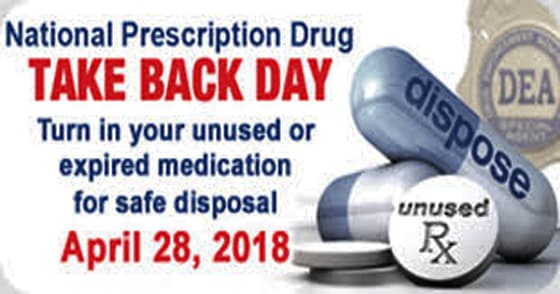 Courtesy/DEA
BHSD News:
SANTA FE — Expired and unused prescription drugs can be dropped off for disposal April 28 as part of the United States Drug Enforcement Administration’s (DEA), Drug Take Back Day.
New Mexico’s Behavioral Health Services Division (BHSD), a division of the Human Services Department, is partnering on this drug take back initiative, while ensuring drug disposal receptacles are available throughout New Mexico each day of the year.
BHSD has 29 locations open across New Mexico for expired and unused medications to be taken and disposed of anonymously and without question. New Mexicans are also able to return unused medications back to pharmacies, hospitals and other designated areas any time of year.
In Los Alamos, residents can drop off expired and unused prescription drugs, 10 a.m. to 2 p.m., Saturday in the parking lot of the Los Alamos Police Department at 2500 Trinity Dr.
“As we continue to build on our efforts to fight prescription drug abuse and overdose fatalities, this is an opportunity for all New Mexicans to join us in this fight to save lives,” Gov. Susana Martinez said. “I encourage all New Mexicans to participate in this free service to get rid of any unused, unwanted or expired medication in the home.”
This is the 14th Drug Take Back Day and is part of a national effort to remove opioids and other medicines from homes so they will not be abused or stolen.
“Medicines no longer being used may pose grave and unnecessary dangers to families and the people visiting their homes. Drug take back programs run by New Mexico’s local communities are a big step toward preventing unnecessary deaths due to the possibility of accidental medication exposure or diversion for illicit use,” Human Services Department Secretary Brent Earnest said.
Last fall, the DEA collected 456 tons of potentially dangerous prescription medications across the country. In New Mexico, the DEA collected 11,688 pounds of medications.
In 2016, the Governor signed legislation designed to reduce drug seeking and to expand access to Naloxone (a medication that can help reverse overdoses from opioids). In 2014, New Mexico became the first state nationwide to provide pharmacists with prescriptive authority for Naloxone. The Martinez Administration has also expanded outpatient treatment programs, removed prior authorization for Suboxone under Medicaid, and is expanding the number of Methadone clinics and the number of these that accept Medicaid.
There are also a variety of education efforts such as the “No Exceptions” drug awareness program, participation in National Prescription Drug Take Back Day, prevention efforts such as the PMP, and policy initiatives such as coverage of naloxone through Centennial Care.
Just a few months ago the New Mexico Department of Health announced the state’s overdose death rate improved from 8th highest in the nation in 2015 to 12th highest in 2016. This is the second year that New Mexico’s ranking has improved substantially according to the Centers for Disease Control and Prevention (CDC). This is the first time New Mexico has not ranked among the top 10 states in drug overdose death rate since the CDC started reporting drug overdose death data in 1999.
While this is important progress in combating drug abuse and overdose fatalities in New Mexico, there’s still a lot of work to be done, which is why the Governor and her Administration will continue doing everything they can to end this epidemic.
“While we’re seeing important progress in combating drug abuse and overdose fatalities in New Mexico, there’s still a lot of work to be done, which is why the Governor and her Administration will continue doing everything we can to end this epidemic,” Department of Health Secretary Lynn Gallagher said.
Take Back Day will begin at 10 a.m. and last until 2 p.m. For a full list of Drug Take Back Day locations, visit www.deadiversion.usdoj.gov/drug_disposal/takeback/.
To learn about other daily available drug take back receptacles in New Mexico, visit: https://www.doseofrealitynm.com/safe-medication-use/.
Menu
Los Alamos
37°
Sunny
7:11am5:22pm MST
Feels like: 36°F
Wind: 5mph ENE
Humidity: 38%
Pressure: 30.19"Hg
UV index: 3
MonTueWed
46/25°F
43/21°F
37/19°F
Weather forecast Los Alamos, New Mexico ▸