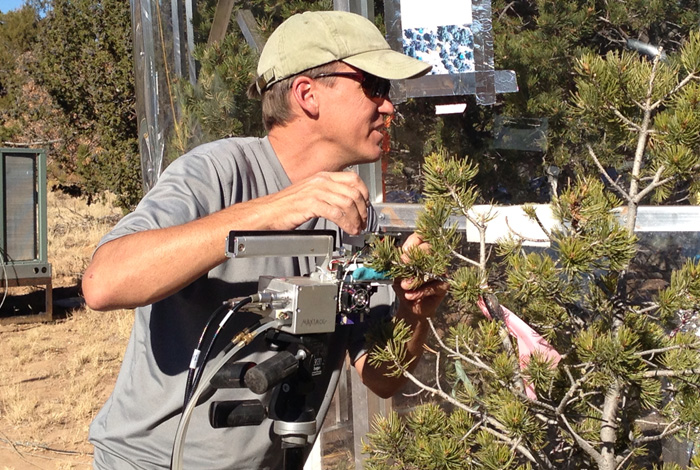 Nathan McDowell measures photosynthesis at one of his research team’s drought experiments. Courtesy/LANL

“The data we have suggests that forests of the Southwest and many other areas are in jeopardy of a massive die-off in the next few decades,” McDowell said. “I was a doubter of these results until we generated more than three estimates, all independent, which came to the same conclusion.”

The talk, titled “It’s not easy staying green: Forests and climate change,” will focus on the increasing climate temperature and the imposing threat it poses to forests.

Because of climate warming, forests are facing threats unlike any other they have seen in thousands of years. Warming dries the forests so that, from the perspective of the trees, even short droughts are severe. No forests appear to be immune to this challenge.

In his talk, McDowell will explain the scientific basis for these conclusions and discuss the options for maintaining forests in the face of this threat. McDowell talks about his research and the upcoming Frontiers in Science lecture in a video.

Sponsored by the Fellows of Los Alamos National Laboratory, the Frontiers in Science lecture series is intended to increase local public awareness of the diversity of science and engineering research at the Laboratory.

All talks in the Frontiers in Science lecture series are free of charge. For more information, call 505.665.9196 or email Linda Anderman at anderman@lanl.gov.

McDowell received a doctorate in tree physiology at Oregon State University and came to the Laboratory as a Director’s Postdoctoral Fellow in 2003. He became a staff scientist in the Laboratory’s Earth and Environmental Sciences Division, where he studies the interdependency of plant and ecosystem, water and carbon cycles and their response to climate and disturbance. He serves on advisory committees for the National Science Foundation, the Department Of Energy, and the Laboratory, and is an associate editor for two international journals. He also has testified before Congress regarding DOE’s climate change research.