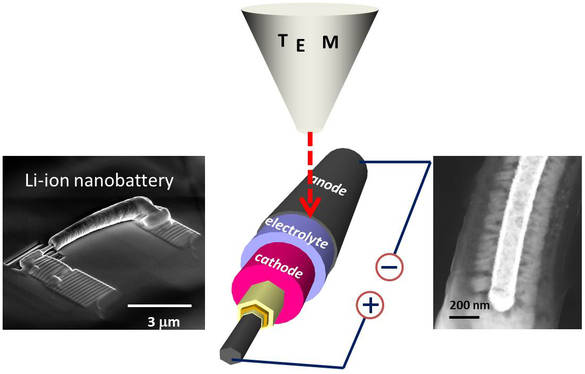 Using a transmission electron microscope, NIST reearchers were able to watch individual nanosized batteries with electrolytes of different thicknesses charge and discharge. The NIST team discovered that there is likely a lower limit to how thin an electrolyte layer can be made before it causes the battery to malfunction. Photo by Talin/NIST

It turns out you can be too thin—especially if you’re a nanoscale battery.

Researchers from the National Institute of Standards and Technology (NIST), the University of Maryland, College Park, and Sandia National Laboratories built a series of nanowire batteries to demonstrate that the thickness of the electrolyte layer can dramatically affect the performance of the battery, effectively setting a lower limit to the size of the tiny power sources.

The results are important because battery size and performance are key to the development of autonomous MEMS—microelectromechanical machines—which have potentially revolutionary applications in a wide range of fields.

MEMS devices, which can be as small as tens of micrometers (that is, roughly a tenth the width of a human hair), have been proposed for many applications in medicine and industrial monitoring, but they generally need a small, long-lived, fast-charging battery for a power source. Present battery technology makes it impossible to build these machines much smaller than a millimeter—most of which is the battery itself—which makes the devices terribly inefficient.

NIST researcher Alec Talin and his colleagues created a veritable forest of tiny—about 7 micrometers tall and 800 nanometers wide—solid-state lithium ion batteries to see just how small they could be made with existing materials and to test their performance.

Starting with silicon nanowires, the researchers deposited layers of metal (for a contact), cathode material, electrolyte, and anode materials with various thicknesses to form the miniature batteries. They used a transmission electron microscope (TEM) to observe the flow of current throughout the batteries and watch the materials inside them change as they charged and discharged.

“What isn’t clear is exactly why the electrolyte breaks down,” says Talin. “But what is clear is that we need to develop a new electrolyte if we are going to construct smaller batteries. The predominant material, LiPON, just won’t work at the thicknesses necessary to make practical high-energy-density rechargeable batteries for autonomous MEMS.”