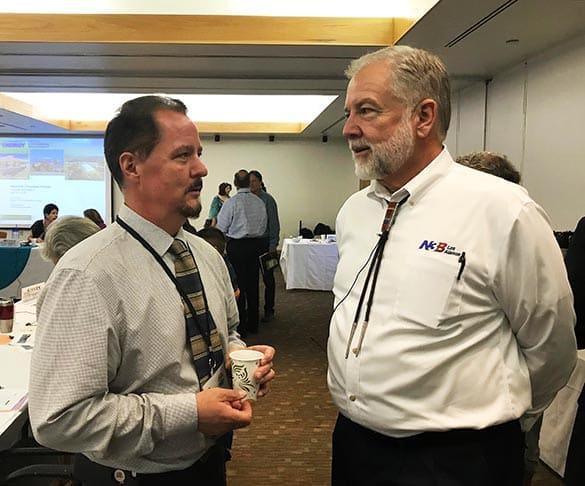 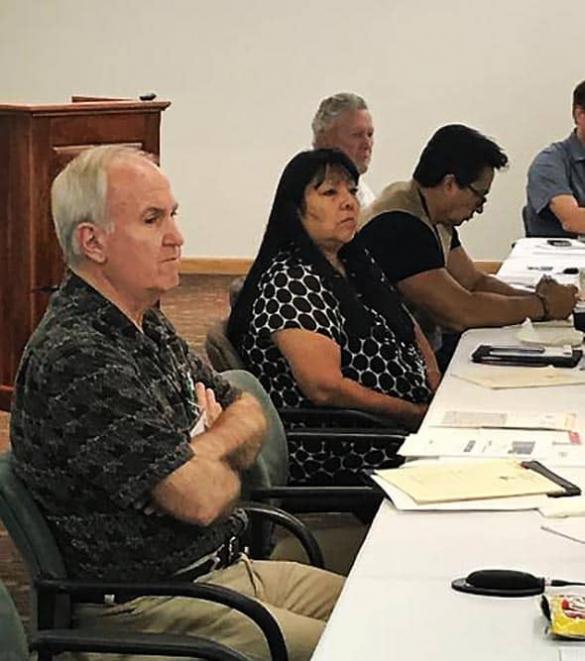 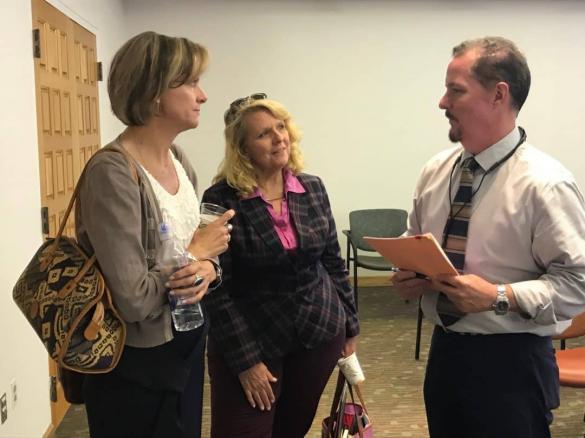 Erich Evered, director of the Resource Conservation Recovery Act (RCRA) remediation program for N3B Los Alamos, LLC at Los Alamos National Laboratory, explained the diverse nature of what needs to be cleaned up at the Lab’s Material Disposal Areas for Northern New Mexico Citizens’ Advisory Board members during their July 25 meeting in Santa Fe.

“Material Disposal Areas (MDAs) are the historic disposal sites around the Lab. Sometimes they’re open pits that have been filled with material, or trenches. In many cases they’re shafts of many diameters, sometimes places where material was carefully and sometimes not so carefully placed, in containers or not in containers. In one case, it’s a dispersed waste situation from liquid waste,” Evered said.

He said there are liquids, sludges, various solids, volatile organic chemicals (VOCs), non-nuclear explosive residues and radiological compounds and rad-contaminated materials all of which need to be cleaned up.

Evered said there are 26 MDAs in all and that the N3B contract is responsible for eight. He said the detail of what has been disposed of varies greatly because records are not as good for the older MDAs as for the more recent ones.

“The regulatory status runs the full gamut from basically not much done yet in the investigation and clean-up all the way through full characterization to actual regulatory closure. We’re not at a standing start at the site with the MDA clean-up program but there is a lot of important work yet to come,” he said.

In some cases, the MDAs have released some contamination into the environment, particularly in the vadose zone from the surface down to the water table. Those contaminants are typically VOCs such as Trichloroethylene. Evered said no groundwater contamination from any of the MDAs has been found.

“The distance from the surface disposal areas to the deep groundwater has not been breached by contaminants, not even close, but still we’re going to continue to protect the groundwater through our approaches to the MDAs and their closure,” Evered said.

He said N3B has work underway and more planned for the future.

“We’re in the process of developing a ‘decision tool’ to work with you, NMED and other stakeholders for all the MDAs in an overarching manner that sets guiding principles and modeling information tools, so that at every stage we understand the information we have available, what information gaps there are that need to be filled, applying that information and knowledge into an analysis tool to help us to understand different scenarios and outcomes from different clean-up approaches,” Evered said.

He said every MDA will go through that process and that one of its strongest foundations is public participation including that of the NNMCAB.

“It’s important to us that you understand what we have done and what we’re doing and inform us how you think we might best approach moving forward. So you are an active participant in this MDA process. It’s not going to be quick. We’re going to be at this a few years and I’m delighted to be a part of it,” Evered said.

He said MDA L at the head of TA-54 has VOC subsurface contamination down to about 300 feet. The groundwater level there is more than 900 feet deep. An interim measure was conducted in 2015 to help contain and reduce the VOC vapor plume.

“Again we’re talking about vapor-based contamination not liquid solvents in the subsurface so think of it as a balloon of gas surrounded by the air where there’s just this blob of contamination in the pore space of the rock underneath the MDA,” Evered said. “What we did was drill wells into it to suck that vapor out as much as we could and we got a lot. And in subsequent monitoring we found that after we stopped pulling it out, it didn’t come back to the level it was, so we had some success in drawing some of the stuff out of there and eliminating the source. The twin objectives of actually removing sources of contamination and determining whether it would get back to where it was on its own were important and we chose both of those and in fact it didn’t rebound as much as we might have seen.”

Evered said the program is going to continue with semi-annual monitoring and annual reporting just to make sure no new releases are happening and continue to evaluate soil vapor extraction as possibly a part of a remediation or remedy for MDA L.

“We see a similar kind of vapor-based contamination in MDA C where the VOCs are about 400 feet below the surface and the groundwater is at about 1,300 feet. We have ongoing monitoring there and we have found that the plume is not expanding or anything like that. We’d like to approach MDA C as the first one to march through the valuable process of evaluation and decision-making that we want for cleaning it up,” he said. “An important step in that process is for DOE and the contractor to submit to NMED a corrective measure evaluation – that’s an opinion on all the information we’ve gathered, our assessment of risk in various scenarios – and look at the various clean-up options to evaluate. Then the regulator has the opportunity to make a tentative selection and bring it before the public for review and input.”

Evered said the report for MDA C is with NMED for evaluation. It presents alternative analyses and once NMED is comfortable they would select a remedy, there would be a statement of basis, a public comment process and a decision going forward,

“And then our responsibility after that would be to prepare a corrective measures implementation plan – a plan, a design, a schedule, a budget to actually implement the clean-up plan,” he said.

Evered said MDA C, which sits in TA-50 above TA-54, right next to TA-55 is a historic disposal site with a number of pits, trenches and shafts.

“It’s about 12 acres of landfill with six pits and a lot of shafts, 108 of them,” he said, adding that he didn’t know why they used shafts instead of trenches but that from 1948 to 1974 there had been quite an operation there.

“Uncontaminated classified materials, metals, hazardous constituents and radioactively contaminated materials were disposed of there. As far as shafts go, they are not terribly deep and there are places on site where they are much deeper,” Evered said.

Evered said each MDA goes through the same process under the 2016 Consent Order.

“The corrective measures evaluation report evaluates potential alternatives, based on the standard EPA criteria for this process which are make sure that its protective, achieves the clean-up objectives, and controls the source of contamination,” he said. Once any alternative gets through all of those we use the balancing criteria to weigh one acceptable alternative against another acceptable alternative to find one that might be the superior choice. That can include a number of factors including longer term reliability and effectiveness, reduction of toxicity, mobility or volume, the shorter term effectiveness, the ability to implement and then cost. Of all the factors, the least important officially is cost.”

In conclusion, Evered said he wanted to lay the groundwork for NNMCAB members for what will be an ongoing discussion.