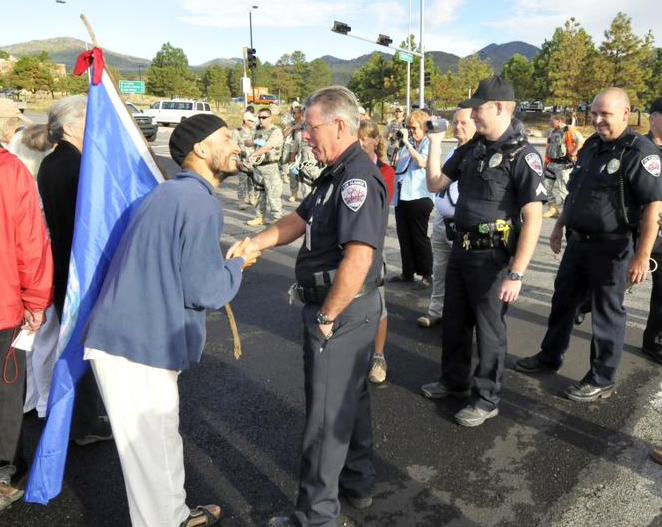 Los Alamos Police Chief Wayne Torpy shakes hands with a protester during Monday’s demonstration at Los Alamos National Laboratory, marking the 67th anniversary of the bombing of Hiroshima and Nagasaki. Despite any differences that may exist between demonstrators and authorities, an air of mutual respect permeated the annual event. Photo by Greg Kendall/ladailypost.com 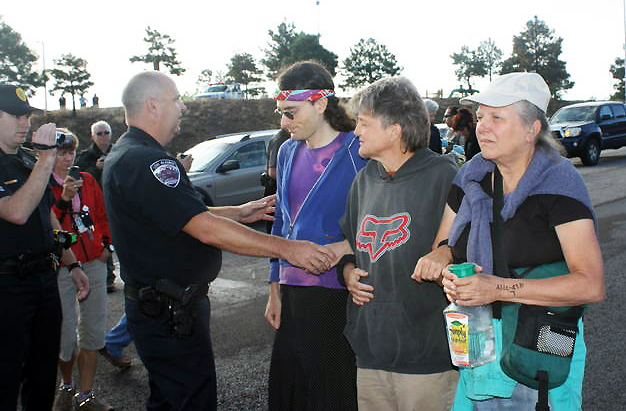 Catherine Euler, Cathie Sullivan, Janet Greenwald, Benjamin (Summer) Abbott, Barbara Grothus and Pamela Gilchrist were released from jail on their own recognizance after spending a couple of hours in the Los Alamos County Detention Facility.

They each were charged with trespassing, failure to obey a lawful order and obstructing traffic and received criminal citations to appear in court.

“Every year we deal with this event and it’s always a balance for us between ensuring that protesters get to exercise their rights, but at the same time it is important for us to partner with LANL’s security force and state police to protect this national asset, which is Los Alamos National Laboratory as well as to ensure that everyone stays safe and protected,” Torpy said. “We have created a culture in which, while we have to do our job to ensure laws aren’t broken, at the same time we treat each individual courteously and respectfully. We may not always like what someone is doing or saying, but it is their right to do so. We don’t want anyone leaving here with a bad impression of our community or our police department and to have an outcome that is successful in addressing all of these aspects of this event speaks to the quality of our police officers, the Laboratory’s security force and the state police officers.”

Members of (Un)Occupy Albuquerque, No New Nukes, Pax Christi and CARD (Citizens for Alternatives to Radioactive Dumping) and a few independent people comprised the 35 or so protesters who participated in Monday’s demonstration at LANL, marking the 67th anniversary of the bombing of Hiroshima and Nagasaki.

The protesters threatened multiple direct actions against the Laboratory but in the end, conducted just one more traffic blocking event, which lasted about five minutes with no arrests. The group then marched off Lab property and over to the Los Alamos County Detention Facility to chant and show solidarity with the six protesters detained inside.

Following her arrest, Grothus spoke to the Los Alamos Daily Post about her experience inside the Los Alamos County Detention Facility. She is the daughter of longtime Los Alamos activist Ed Grothus who died several years ago from cancer.

“It’s my first time out here since my father died,” she said. “I’ll tell you, the jail out here is much better than the jail in Albuquerque. We will tell everybody how good we were treated in this jail and maybe more people will come next year.”

Torpy explained that those arrested were given food and cold bottled water during their stay in the local jail.

Grothus said that when people go to jail for a belief, that it sometimes has a bigger impact than just standing in the street or on the sidewalk talking about it.

Grothus is involved with (Un)Occupy Albuquerque.

“We have a really good solid group of people who are here who went to jail last fall,” she said. “I went to jail in Albuquerque with (Un)Occupy when we were evicted from the University (UNM) and we have a lot of solidarity with those people.”

“I think it’s important to take a stand. Our planet is in terrible trouble and Los Alamos should be doing something good here,” she said. “We should be using our minds for fixing things, you know, making it a better place, trying to fix the things we’ve done wrong. Weapons are not a good thing to spend our money on. I hope it will make a difference, eventually you know. I think there are a lot of people here who appreciate this message actually and they would like to be doing better and different work, if they could. I don’t think this is what most people want to do. The most significant threat that we don’t seem to have any control over is climate change. I’m so sad for our planet. Los Alamos could be more of a game changer in that struggle. The next generation is going to have a bleak time with all the focus on security and fear. “ 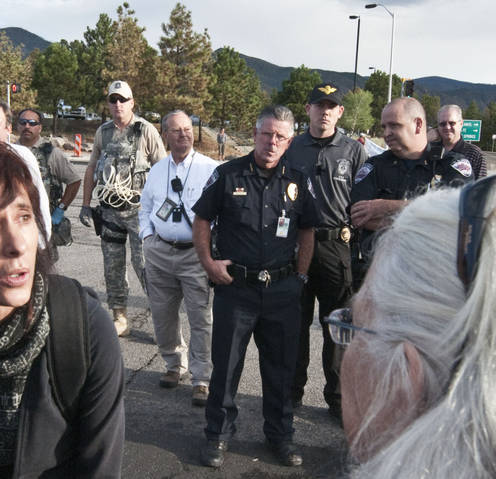 Following her jail experience, Euler spoke about her reasons for demonstrating.

“I think it’s very important to slowdown and stop the work of the Lab as it currently exists. The Lab continues to emit radioactive contamination close to this community and to communities down river,” she said. “The Rio Grande aquifer is contaminated. They have found plutonium in the aquifer. There are some serious questions that the DOE is not addressing that need to be addressed by any person of conscience.”

A LANL employee stated during the group’s Sunday protest at Ashley Pond that he actually feels safer living and working in Los Alamos than elsewhere. “because of the significant amount of air and water monitoring occurring throughout the community on a continual basis as well as the vigorous safety and security measures in place at the Lab.”

Euler said that she thinks the Los Alamos community is dependent on jobs at the Lab, adding that no one should have to choose between their job and their conscience.

“I think this community is at risk from the radioactive contamination that has continued to build since the 1945 and there are all kinds of things besides cancers that independent scientists have associated with long term chronic exposure to low level radiation, like autism, asthma, heart disease and other things besides cancers,” she said. “Every person of conscience, every scientist in this community needs to open their minds to looking at the independent scientific data, not produced by the DOE, which actually shows much stronger health effects from chronic low level radiation than what the DOE has ever been willing to admit.”

Brittany Arneson of (Un)Occupy Albuquerque said that she decided to drive up from Albuquerque and demonstrate, “to stand up to the violence against indigenous people and indigenous land. I want to secure the future for myself and my children. We want to ask the police, what about your children?”

Protester Elizabeth West of Santa Fe said, “It’s exciting to be part of this. We’re suggesting that we make some peaceful changes. It’s a beautiful day for enlightenment.”

Mary Riseley of Cliff, near Silver City has participated in Hiroshima/Nagasaki demonstrations in Los Alamos for several years.

“I believe very strongly in this cause. I want to do anything I can to disarm the world of nuclear weapons,” Riseley said. “My father was a lieutenant general in the United States Marine Corps. He hated nuclear weapons because he felt they destroyed military honor by targeting civilians. I inherited his warrior energy. We need warrior energy—people who are passionate, willing to work as a team and be courageous. I agree with Martin Luther King, who said ‘It’s not a choice between violence and nonviolence but a choice between violence and nonexistence.'”

Editor’s note: Carol A. Clark contributed to this story.