Municipal Judge Alan Kirk announces his bid for re-election Thursday evening at a GOP meeting at UNM-LA. Photo by Carol A. Clark/ladailypost.com 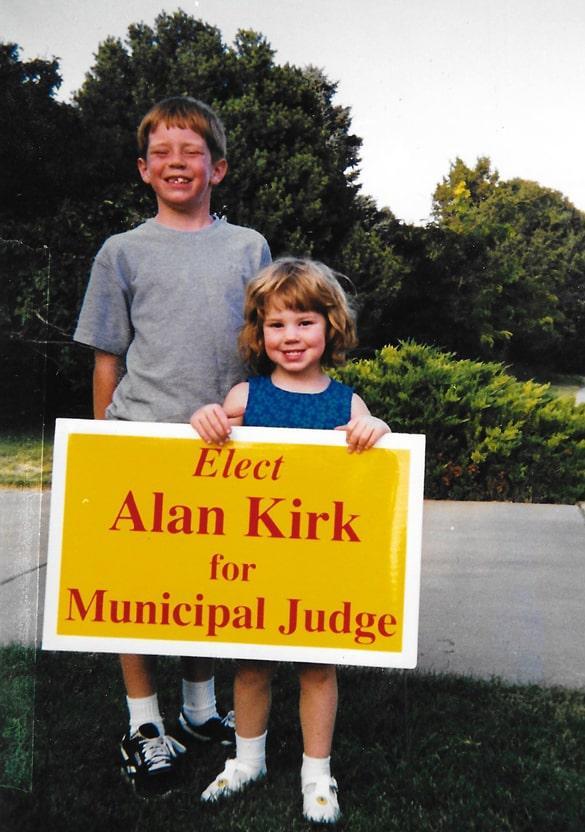 Kirk is serving his 20th year on the bench and spoke about his decision to seek a 6th term, during an interview Saturday at the Los Alamos Daily Post.

“I’ve lived in Los Alamos for 60 years and worked for the County or as an elected official for 40 years and I’m not done yet,” Kirk said. “There are more things I’m interested in staying involved in here in the community. Also, we’ve experienced a lot of changes in the court in the last two years … I believe we need someone experienced to work through and implement these changes.”

Kirk has presided over nearly 40,000 cases over the years and said the experience he has gained is extremely valuable to understand situations that come before the court.

“We have a very professional Municipal Court with very professional staff and have always served the community well,” Kirk said. “It is very important in my court to allow the citizens a fair and impartial opportunity for due process … probably the biggest role I play is in educting them about the judicial system.”

Kirk said he has always felt that in holding a position in the community such as judge, it is important to stay involved. He has a long history of commitment to providing support for local youth and has been deeply involved in the development of youth advocacy programs and projects. He coached boys and girls basketball for 18 years at Los Alamos High School. He participated in the development of the Juvenile Justice Advisory Board and has served as its chair since its inception in 2002. The program is recognized as a model for the state. He developed the local Teen Court, a community service program to enhance the current probation program.

“These programs have grown and we now provide access to Magistrate Court, District Court and the Juvenile Probation Office,” Kirk said.

He also spent eight years working with other community members in the development of the Los Alamos Teen Center, which he said he believes is one of the best teen centers in the state.

Kirk participated in the development of Leadership Los Alamos and is a past chairman and graduate of Leadership New Mexico. He also has chaired the Municipal Court Judges Association, representing 84 municipal judges throughout New Mexico.

At the state level, Kirk has received two Supreme Court appointments, one to the State Judicial Information Oversight Board and the other to the Chief Judges Council, which has representation from all levels of court in the state. In 2016, he received a governor’s appointment to the Juvenile Justice Advisory Council for the Child, Youth and Families Department (CYFD).

Kirk also has experience as a small business owner having operated a painting business for several years and employing up to 21 workers.

“All of this has given me a balanced persepctive of the community,” he said.

Kirk moved to Los Alamos in 1958 and graduated from Los Alamos High School and Eastern New Mexico University. He served as police chief in Los Alamos for 10 years prior to his election to the bench. He has been married for 43 years to Pat Kirk, an instructional aide at Pinon Elementary School in White Rock. The couple has two children, Alex and Erin, who each graduated from Los Alamos High School and the University of New Mexico in Albuquerque. Alex is a pro basketball player now playing on a team in Japan and Erin is a State Farm agent in Albuquerque.

The Municipal Court of Los Alamos is one of 84 Municipal Courts in New Mexico. It is a court of limited jurisdiction, which hears cases involving municipal ordinance violations such as petty misdemeanors, DWIs/DUIs and traffic violations. The court is in the Justice Center at 2500 Trinity Dr., Ste., C in downtown Los Alamos.