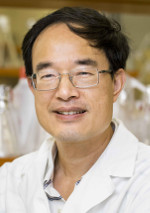 Zucai Suo
FSU News:
TALLAHASSEE, Fla. — Award-winning biological chemist Zucai Suo, whose discoveries helped the development of two blockbuster antiviral drugs, has joined the Florida State University College of Medicine as the Dorian and John Blackmon Endowed Chair in Translational Research.
His laboratory’s new ground-floor home at the medical school marks a figurative and literal expansion of the college’s research aspirations.
“Dr. Suo is an emerging star in his field who will complement a number of our current faculty while also bringing significant new technology and ideas to our program,” said Jeffrey Joyce, senior associate dean for research and graduate programs. “His arrival fits our strategy to develop novel platforms for translational research. One of the things he’ll do is help us collaborate across many research strengths in other colleges at FSU to be successful.”
Suo, who is bringing five federal grants with him to Florida State, focuses his research in three areas: the kinetic mechanisms of enzymes involved in DNA/RNA replication, lesion bypass and repair; understanding gene-editing enzymes; and developing small or large molecules as antiviral and anticancer drugs.
Earlier in his career, he helped develop two small molecules leading to an HIV treatment that has generated more than $48 billion in revenue for the biotech giant Gilead Sciences and an anti-hepatitis C drug that has generated about $5 billion for the biotech firm Vertex.
A near-term goal is the development of an FSU Drug Discovery Institute.
“It is one of my dreams,” Suo said. “Hopefully, we can make the next big discovery here.”
Suo, who became a senior biochemist at Eli Lilly and Co. after completing a postdoctoral fellowship at Harvard Medical School, spent 17 years at The Ohio State University. There, he won numerous teaching and research awards, including the 2005 National Science Foundation Career Award, and became a 2013 elected fellow of the American Association for the Advancement of Science. Along the way, he developed an international reputation for discoveries in antiviral and anticancer therapeutics.
Seeking to fill a new senior-level position in the broad arena of translational research in the biomedical sciences, an FSU search committee quickly became enamored of Suo. The committee was interested in identifying a candidate who fit the description of a preeminent faculty member with accomplishments in drug discovery. Suo stood out.
“Dr. Suo is on the cutting edge of DNA technology,” said Gary Ostrander, vice president for Research at Florida State University and professor in the College of Medicine.
In February, Suo was part of a team that published an article in the journal Nature explaining how DNA bases shape-shift — or alter their form — for a thousandth of a second. The alteration in form — known as tautomerization — sometimes leads DNA’s replication process to match the wrong base pairs into its double helix, serving as the cause of genetic changes that drive evolution, aging and diseases, including cancer.
With the discovery, Suo and his collaborators opened the door to ways of exposing the mutations to the body’s own defense systems, and to drugs able to target what previously may have been hidden from view.
“Any living organism is supposed to correct that mutation when a pair is mismatched, but the tautomerization happens so fast that it can’t be recognized by the DNA repair mechanism,” Suo said. “So they hide there, and we believe that’s at least one of the main mechanisms for disease-causing mutations to survive in the DNA.”
Among his reasons for relocating to Florida State, Suo cites his new colleagues and the supportive atmosphere in the medical school’s Department of Biomedical Sciences; the university’s Institute of Molecular Biophysics, which presents additional opportunities to observe high-resolution structures of important biological complexes with bound drug molecules; and Florida cuisine.
“Tallahassee is a medium-size city and will be a great place for my family,” he said. “We’re so close to the Gulf of Mexico and there will be plenty of things to do during our leisure time. Yes, I’m also looking forward to experiencing the fresh seafood as well.”
Menu
Los Alamos
75°
Fair
5:48am8:24pm MDT
Feels like: 75°F
Wind: 7mph NE
Humidity: 16%
Pressure: 30.23"Hg
UV index: 5
SunMonTue
90/66°F
84/59°F
90/64°F
Weather forecast Los Alamos, New Mexico ▸