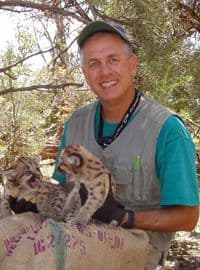 Ken Logan. Courtesy/PEEC
Internationally recognized cougar expert Ken Logan of the Colorado Parks and Wildlife division will talk at 2 p.m. Sunday, Aug. 12 at PEEC about his years of research on these beautiful and elusive animals. The talk is free and open to the public.

The focus of Logan’s career has been on the science of the cougar, and on putting that scientific information into a format that will inform decision makers and citizens as they consider mountain lion management and conservation.

Logan was the lead researcher for a 10-year, $1.4 million study of mountain lions commissioned by the New Mexico Department of Game and Fish.

He has also published numerous articles and a book about mountain lions, Desert Puma: Evolutionary Ecology and Conservation of an Enduring Carnivore with his wife and fellow-researcher, Linda Sweanor.

A 2006 Smithsonian magazine article about cougars featured Logan and discussed his research into the questions, “Are cougars destructive, overabundant predators that kill livestock and deer (robbing hunters of that opportunity), or splendid, overhunted icons that deserve protection? And how dangerous are they to people?”

Cougars are blamed for many wild and domestic animal deaths, but facts on population size and density, range and more, are hard to come by. Logan and Sweanor’s research has helped shape cougar management practices throughout the West.

These last areas are of special interest in Los Alamos, where mountain lion sightings have increased this summer, and more lion-human and lion-pet interactions have been reported.

Of 41 sightings reported in Los Alamos to Yukon Wildlife Studio’s Project Mountain Cat, only three cougars ran away, while 13 were unafraid of the humans and four actually attacked a pet.

Animal Protection of New Mexico will also attend the event, and will have information and giveaways from the Cougar Smart New Mexico campaign, designed to help keep people safe when recreating and living in cougar country.

This campaign is a joint project of APNM, New Mexico Department of Game and Fish, the US Forest Service, New Mexico State Parks, and Santa Fe County Open Space and Trails. 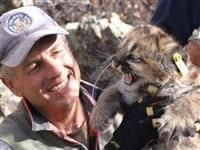 Ken Logan. Courtesy/PEEC
PEEC is thrilled to bring Mr. Logan to Los Alamos.
This promises to be a fascinating and informative talk, and is a very special opportunity to learn from one of the top mountain lion researchers in the country.
Menu
LOS ALAMOS