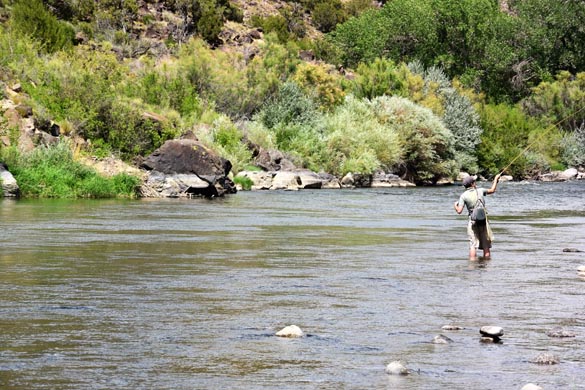 A fly-fisherman tries his luck on the Rio Grande. Photo by George Morse/ladailypost.com 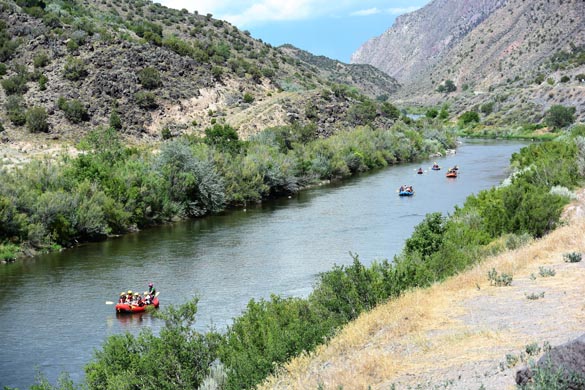 This is a busy time for rafting trips on the Rio Grande. Photo by George Morse/ladailypost.com
By GEORGE MORSE
Sports and Outdoors
Los Alamos Daily Post

The winding road that is US Highway 68 between Espanola and Taos can take you to some great fishing as it follows the Rio Grande from Velarde to Pilar. Checking the streamflows, the mighty Rio has fallen to just 454 cubic-feet-per-second at Embudo, which was well below normal. The water is running fairly clear. It’s a good level for fishing.

The nice thing about the Rio Grande is it’s readily accessible to anglers from Los Alamos and Espanola. With just a few hours left to fish Friday, I could still be on the water in less than 30 minutes.

Despite the proximity of the river to Highway 68, it receives surprisingly little fishing pressure. Part of the reason for this is although it’s a short distance to the river, the descent to it is often steep. The ground is often loose sand, gravel or rocks. It’s pretty easy to slip and slide on your way down. The banks are often overgrown with willows and it can be hard to find an opening to fish from. The lower water level helps open up the banks a little. Waders or not particularly caring if your feet get wet helps.

There’s a few spots where I expect to catch fish along the river. I went to one Friday. The water is in great condition for fishing with spinners. In short order I caught and released three rainbow trout and a smallmouth bass on a Panther Martin spinner. Seems like that’s the majority of the catch along this stretch of river anymore. It used to be that you’d catch a lot of brown trout, including some big ones. I think this species is having trouble reproducing in this section of the river.

The rainbow trout are stocked as 10 inchers or longer, so they’re better able to escape predation. Some of them carryover and get bigger, but by and large the Rio Grande does not have the big fish potential that it used to, at least in its lower sections.

The river is in great shape for fly-fishing.

You’ll have to share the water with lots of rafters, kayakers and in some spots, swimmers.

Still, it’s nice to have fishing close by. One great thing about a road trip along this section of the Rio Grande is there are other things to do. There are great places to eat. Sugars, a barbeque and burger joint on the eastside of the highway just past Embudo station, was recognized by Gourmet magazine as one of the 10 best drive-ins. I always get the barbeque beef sandwich with onion rings, but their burgers and fries are supposed to be top notch, too. They also serve great ice cream, which can be a real treat on a hot summer day.

You can stop at the Blue Heron Brewery in Rinconada and get a cold beer. The Vivac Winery at the intersection of Highway 68 and State Road 75 has cold beer and award-winning wines, along with some creatively-crafted chocolates. They have a nice vineyard and the vines are heavy with grapes that will ripen later this fall.

Turn on to State Road 75 and head to Dixon. You can stop at the Dixon Cooperative Market and pick up some essentials, but they also have a great selection of locally-produced products. Also good deli sandwiches. Just down the road is Zuly’s Café. Be warned it is closed Sunday and Monday (get a sandwich at the Coop on Mondays), but serves breakfast and lunch Tuesday-Friday. It consistently draws good-to-great reviews. Just past Zuly’s is La Chiripada Winery, where Sunday a very friendly Pat Johnson offered tastings of their reds and whites.

No trip along the Rio would be complete without stopping at one of the fruit stands in Velarde for some fresh fruit. Peaches, nectarines, apricots and plums are in season right now, as well as the tail end of the cherries. Also in Velarde is Mike’s MiniMart, where they serve great breakfast burritos and good green chile cheeseburgers.

If there’s one drawback to this road trip, it’s going to be the construction that will start Aug. 1 and run until November. New Mexico Gas Company will be installing a gas pipeline along the east side of Highway 68 between Rinconada and Pilar. That will narrow the traffic down to one lane. The pipeline currently runs along the west bank of the Rio Grande in that area, but it is vulnerable to rockslides. They say they will try to limit the traffic delays, but I’d take that with a grain of salt.

A good option would be to take State Road 75 to Dixon and then continue up the road to Penasco. There, head through the small village of Vadito and take a left at the stone wall intersection on to State Road 518, also known as the “High Road to Taos.” This is a very scenic drive through the mountains. A good place to stop and eat in Penasco is Sugar Nymphs Bistro.

This is a great road trip even if you’re not fishing. 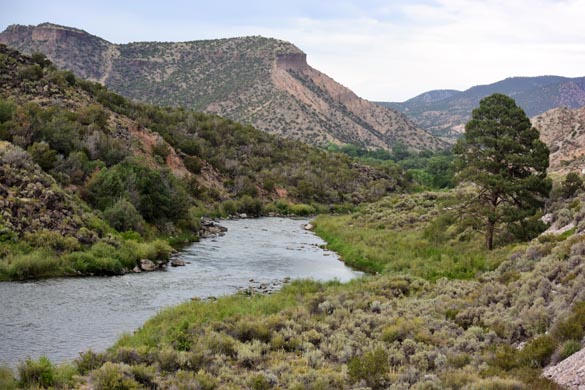 The streamflows in the Rio Grande have dropped to a level that’s good for fishing. Rainbow trout and smallmouth bass dominate the catch. Photo by George Morse/ladailypost.com 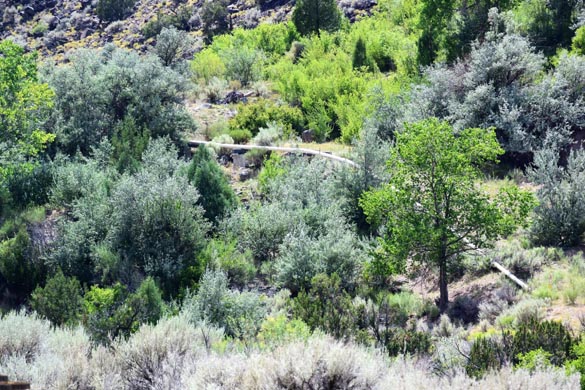 This section of gas pipeline on the west bank of the Rio Grande will be replaced by a new line on the other side of the river. Construction will start Aug. 1 and run until November. Photo by George Morse/ladailypost.com 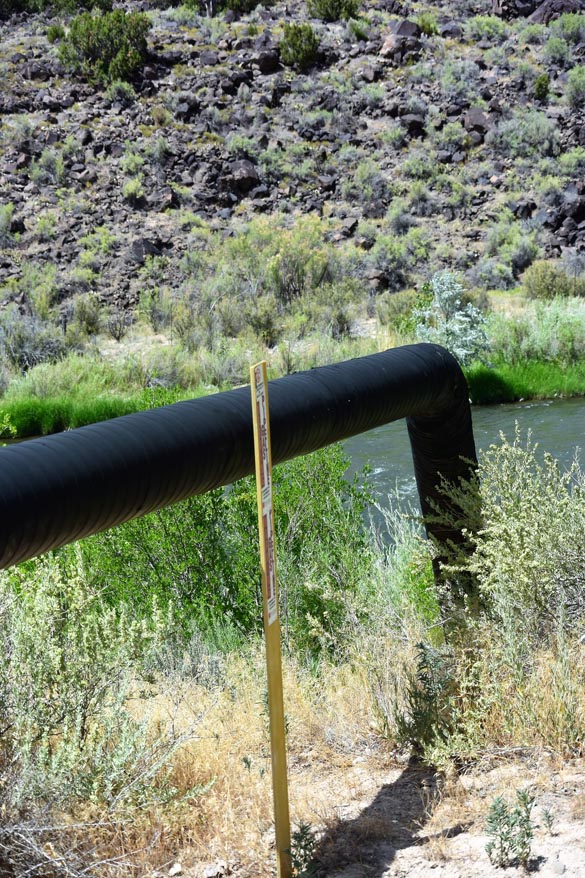 This section of gas pipeline that crosses the Rio Grande will be replaced. Photo by George Morse/ladailypost.com 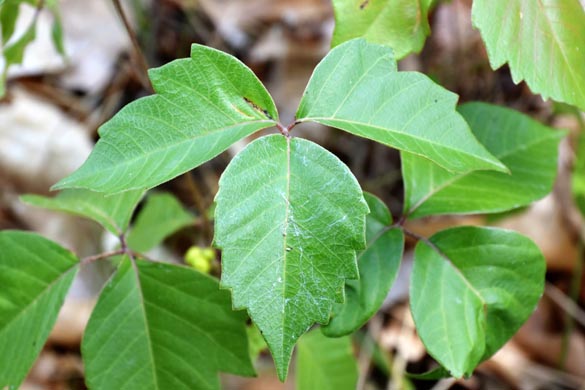 Poison ivy grows along the banks of the Rio Grande and is identified by its three leaves. Avoid it. Photo by George Morse/ladailypost.com 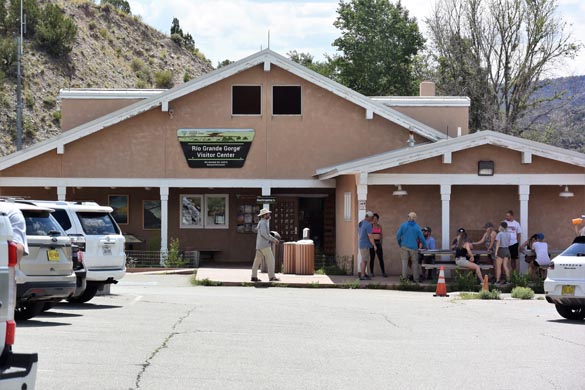 The Visitors Center at Pilar offers information and permits for the Rio Grande Gorge and the Orilla Verde Recreation area. Photo by George Morse/ladailypost.com 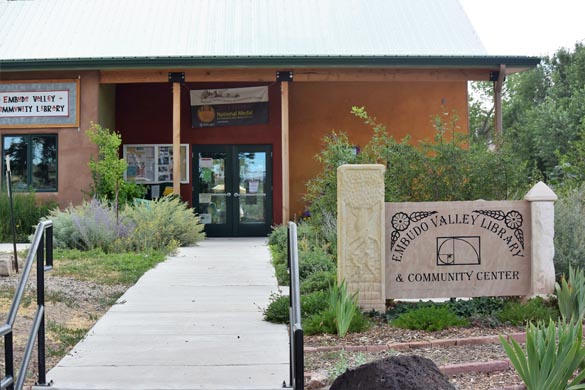 The award-winning Embudo Library in Dixon is a good source of local information. Photo by George Morse/ladailypost.com 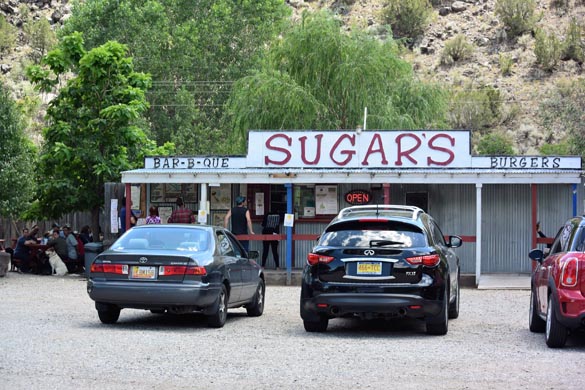 Sugar’s has great barbecue and burgers. It was named one of the 10 best drive-ins by Gourmet Magazine. Photo by George Morse/ladailypost.com 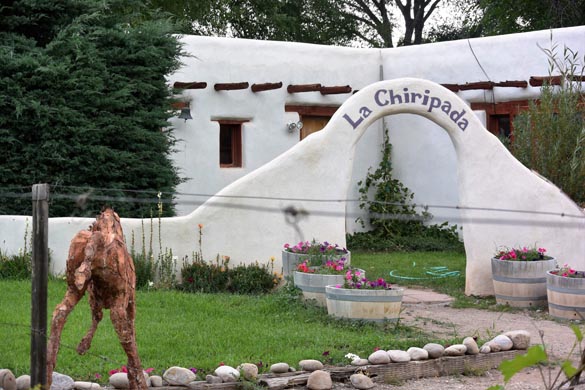 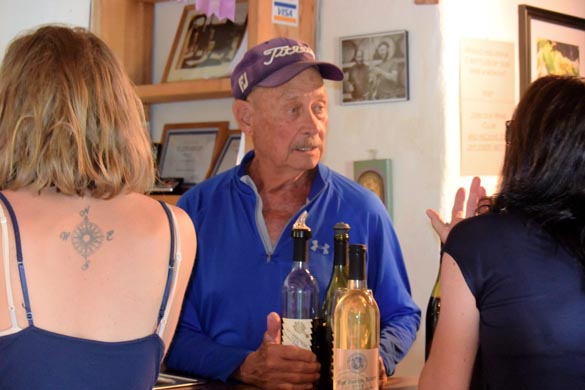 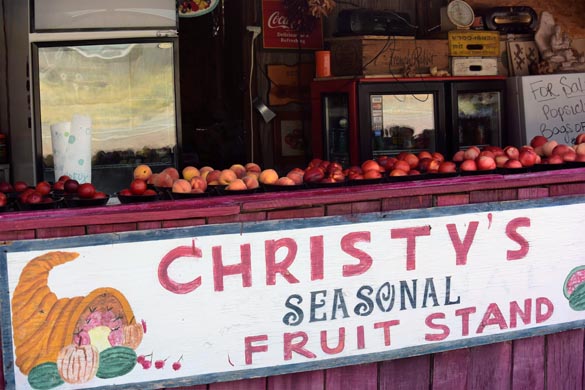 Christy’s is one of several fruit stands in Velarde selling fresh fruit in season. Photo by George Morse/ladailypost.com 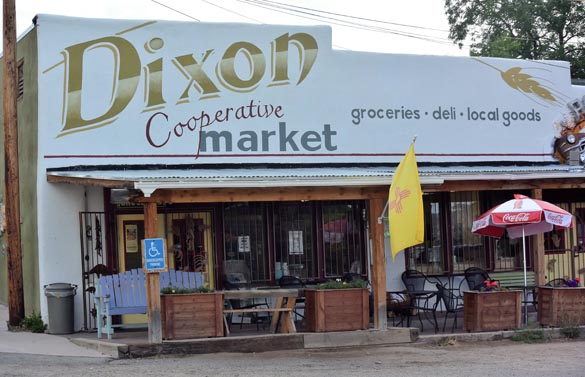 The Dixon Cooperative Market has lots of local products on sale. Photo by George Morse/ladailypost.com