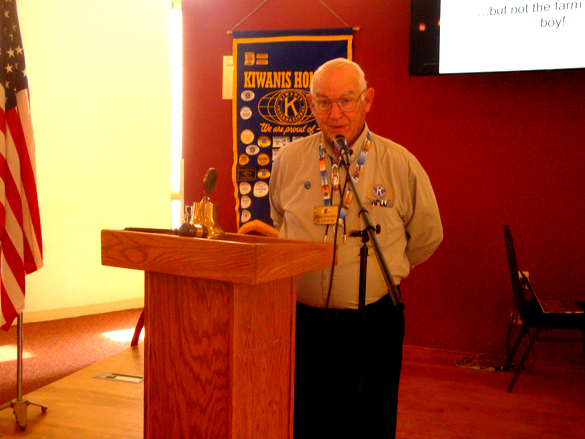 Morrie Pongratz told his Kiwanis friends that he was “glad to be home after two weeks of driving a tractor” on his family’s Nebraska farm.

However, when he spoke formally before Kiwanis several days later, sharing his experiences with the corn harvest and modern-day agriculture in general, it was obvious that, as he put it in his very first slide, “You can take the boy out of the farm, but not the farm out of the boy.”

After years as a Los Alamos National Laboratory scientist (now retired) who has also served on the Los Alamos County Council, volunteered as the Kiwanis liaison with the Los Alamos High School Key Club, and acted as a frequent announcer at local youth sporting events, he still goes home every fall to help the Pongratz family harvest corn.

The Pongratz family has 700 acres of land “near O’Neill at the edge of the Sand Hills.” The family rents another 700 acres. About 750 of the family’s acres are in corn; about 630 are in soybeans, and a few more acres are in potatoes, popcorn, etc. Center-pivot irrigation keeps the fields producing.

Pongratz showed slides of an enormous planting-and-fertilizing machine that punches in seed in 16 rows at once. He also showed photos and motion pictures of a huge combine that harvests eight rows of corn at a time, slurping in corn plants, separating the corn cobs from the stalks, and spewing out streams of golden corn into a trailer pulled by a tractor (driven by Morrie, alongside the combine). The corn is then transferred to a semi, which delivers it to a grain elevator, which serves all of the farmers in a 50-mile-radius farming area. Long lines of trucks and trailers wait to sell their crops to the elevator operator, and, often, the corn ends up in huge mountains open to the weather until railroad cars arrive to haul it away.

Compared to the slow, hard work in the fields that was normal many years ago, the process seems (to a non-farmer) amazingly fast and efficient.

However, Pongratz made clear, there are serious problems that plague agriculture nationwide. For example:

Still, the Middle States continue to be the major producers of corn in the United States. In 2015, Iowa was No. 1, Illinois was No. 2, Nebraska was No. 3, and Minnesota was No. 4 in corn production.

Pongratz, however, showed photos of an area with 200 Warren Buffet windmills in a hay field just down the road from the Pongratz farm. Energy production might be the future for area farmers, he said.

There is still charm in the farm. Morrie’s wife, Cheryl, commented that their son preferred the family farm to Paris.

In response to a question, those in the Kiwanis crowd raised their hands to reveal that almost all of them came from families in which either their fathers or their grandfathers were farmers. They were clearly interested in what is now an alien world for most of them, and they seemed somewhat concerned about the prospects for the future.

Lana Schulte, who works with the New Mexico Beef Council, commented that the future of agriculture is not only interesting but “really frightening. “We shouldn’t take our food supply for granted,” she said.