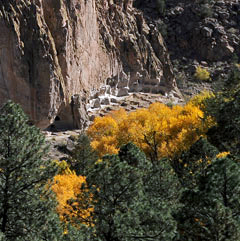 Search and rescue teams found the missing 34-year-old Texas woman around 12:30 p.m. Saturday in good condition on the Ancho Canyon Trail on Department of Energy land at Bandelier National Monument.

The woman had hiked to the Upper Falls on the Falls Trail Thursday.

Although hiking to the base of the Upper Falls is prohibited, the woman wanted to search for treasure featured in Forrest Fenn’s book “The Thrill of the Chase.”

After realizing she could not hike down to the base, the woman returned to her car. On Friday, she parked at a gate on Department of Energy Land and hiked down to the Rio Grande and up the Falls Trail.

When she reached the waterfall, it began to rain and she decided to head back to her car. It was getting dark as she hiked back and she missed the trail.

Realizing she would have to spend the night, the woman found shelter near a rock. Saturday, the hiker began re-tracing her steps and was able to find the trail back to her car.

It was on the Ancho Canyon Trail that she was intercepted by a New Mexico Search and Rescue Team.

The hiker ran out of water but was in good condition when found. She was hydrated and given electrolytes by a medical team and will be returning home to Texas.

The young woman had traveled to Los Alamos Wednesday after being inspired by a Today Show interview with New Mexico multi-millionaire and author Forrest Fenn.

Fenn’s book “The Thrill of the Chase” features a unique map and nine clues leading readers to a treasure he buried three years ago in the mountains north of Santa Fe worth a fortune.

Bandelier National Monument reminds visitors to stay on marked trails when in the monument and be prepared for winter weather by dressing in layers, and carrying food and water.

It is important to note that it is illegal to dig, bury an item, or use a metal detector on federal lands such as Bandelier National Monument.