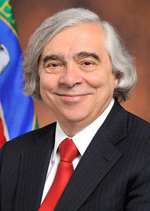 Secretary of Energy Ernest Moniz
DOE News:
WASHINGTON, D.C. ― U.S. Secretary Of Energy Ernest Moniz released the following statement on the occasion of the 2015 conference on facilitating entry into force of the Comprehensive Nuclear-Test-Ban Treaty:
“In 1992, the United States government voluntarily implemented a moratorium on nuclear explosive testing—a policy that has been observed ever since, by four presidential administrations, both Democrat and Republican.
“Four years later, the United States was the first country to sign the Comprehensive Nuclear-Test-Ban Treaty (CTBT) when it opened for signature.
“Today, the Obama Administration continues to urge ratification by the United States, as well as the other Annex 2 states, so that the treaty can enter into force as quickly as possible. A legally binding prohibition on nuclear explosive testing is in the interest of all nations and of all humanity, and is long overdue.
“The case for the CTBT has never been stronger. Over the past 20 years, the United States has gained high confidence in our ability to maintain the safety, security, and effectiveness of our much smaller nuclear arsenal through the scientific, technical, and engineering capabilities of our Stockpile Stewardship Program, without the need for nuclear explosive testing.
“During that same period, the International Monitoring System for verifying compliance with the CTBT has developed and matured to the point that nuclear explosive testing by anyone, even at very low yields, will be detected.
“I’d like to thank all the delegates to the 2015 Article XIV conference for their steadfast support for the CTBT, and to express my deepest appreciation to the governments of Japan and Kazakhstan for their outstanding leadership in this year’s proceedings. We look forward to working with all parties to make the CTBT’s entry into force a reality.”
The Comprehensive Nuclear-Test-Ban Treaty (CTBT) is a multilateral treaty by which states agree to ban all nuclear explosions in all environments, for military or civilian purposes. It was adopted by the United Nations General Assembly Sept. 10, 1996 but it has not entered into force due to the non-ratification of eight specific states.
Menu
Los Alamos
43°
Fair
7:01am4:51pm MST
Feels like: 37°F
Wind: 6mph SSW
Humidity: 28%
Pressure: 30.12"Hg
UV index: 0
MonTueWed
48/34°F
46/30°F
48/32°F
Weather forecast Los Alamos, New Mexico ▸