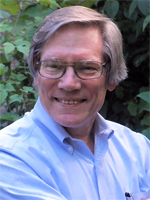 The lecture, “Inflationary Cosmology: Is Our Universe Part of a Multiverse?” is free and open to the public.

Inflationary cosmology gives a plausible explanation for many observed features of the universe, including its uniformity, its mass density, and the patterns of the ripples that are observed in the cosmic microwave background. Beyond what we can observe, most versions of inflation imply that our universe is not unique, but is part of a possibly infinite multiverse.

The speaker will describe the workings of inflation, the evidence for inflation, and why he believes that the possibility of a multiverse should be taken seriously.

Dr. Guth is the Victor F. Weisskopf Professor of Physics and a Margaret MacVicar Faculty Fellow at the Massachusetts Institute of Technology. He is a member of the U.S. National Academy of Sciences and the American Academy of Arts and Sciences, and has been awarded the MIT School of Science Prize for Undergraduate Teaching (1999), the Franklin Medal for Physics of the Franklin Institute (2001), the Dirac Prize of the International Center for Theoretical Physics in Trieste (2002), and was a co-recipient of the Kavli Prize in astrophysics awarded by the Norwegian Academy of Science and Letters (2012).

In 1981, Guth proposed that many features of our universe, including how it came to be so uniform and why it began so close to the critical density, can be explained by a new cosmological model which he called inflation. Inflation is a modification of the conventional big bang theory, proposing that the expansion of the universe was propelled by a repulsive gravitational force generated by an exotic form of matter.

Dr. Guth’s lecture is sponsored by the J. Robert Oppenheimer Memorial Committee, a philanthropic, non-profit organization dedicated to honoring the memory and legacy of Oppenheimer, one of the most notable scientists of the 20th Century.