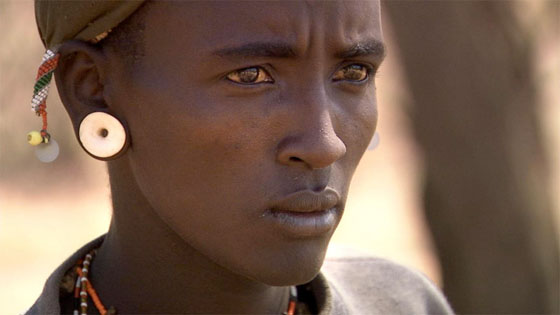 Milking the Rhino examines the deepening conflict between rural Africans and the animals in the ever-shrinking African wilderness. Decades ago, the creation of Africa’s national parks and vast game reserves forced out thousands of indigenous people who had coexisted in harmony with wildlife for millennia on a land without borders. The “fences and fines” approach to preserving wildlife disrupted traditional lifestyles, making the wildlife refuges and parks the property of the “white man” and turning ordinary food gathering into a criminal act.

Exploring wildlife conservation from the perspective of the indigenous people, Milking the Rhino presents the struggle of two ancient cattle-herding cultures: the Il Ngwesi Maasai ethnic community in north central Kenya, and the Himba people in northwest Namibia overlooking Angola. Both communities find themselves clashing with the myth of “wild Africa”, which brings millions of tourists to the continent every year, particularly because the wildlife that draws these visitors competes for grazing with the community’s domestic cattle.

The film follows the parallel tracks of both communities (who live on opposite sides of the continent) as they consult with NGO field workers and social entrepreneurs at the village level. The advisors are charged with convincing bush-dwelling Africans to adopt community-based conservation (CBC), a new way of co-existing with wildlife that gives the tribes a piece of the economic pie and paves a path towards self-sufficiency. CBC is touted by conservationists as a win-win situation, but the reality is more complex, especially when a multi-year drought tests the ethnic group’s commitment.

Milking the Rhinooffers complex, intimate, harrowing and hopeful portraits of rural Africans at the forefront of community-based conservation—a revolution that is turning poachers into preservationists and local people into the stewards of their land.

A question and answer session will follow the film with the documentary’s originator/co-producer, Jeannie Magill. Having organized and led educational safaris in Kenya for many years, Magill had direct knowledge and experience with these African communities, which allowed her to create the concepts and goals for Milking the Rhino. For more information about the film, visit www.milkingtherhino.org.

The Wildlife Center in northern Santa Fe County, is New Mexico’s only wildlife hospital serving all endemic species. Thirty-seven non-releasable educational animals including eagles, bobcats and owls reside at the Center and are the centerpiece of over 100 educational programs and over 400 public tours each year at the Center and throughout northern New Mexico. These programs reach about 5,000 adults and children each year.

The Center is staffed by seven employees and more than 70 volunteers, who give over 6,500 hours of their time annually. The Wildlife Center is a 501 (c) (3) nonprofit organization whose primary funding comes from individual donors and private foundations. For additional information, contact The Wildlife Center at 505-753-9505 or visit www.thewildlifecenter.org.