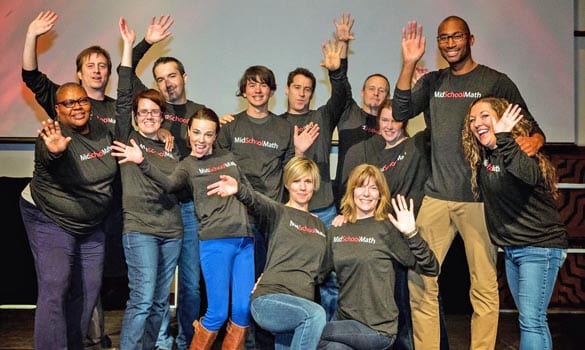 The LANL Community Foundation, which provided the company with its very first grant, is not the only one to take notice in this company. The U.S. Department of Education awarded MidSchoolMath more than $1.2 million in funding, and in September, MidSchoolMath was awarded a $750,000 Small Business Innovation Research phase II grant from the National Science Foundation.

Receiving the grant provided the company the opportunity to earn more support from the National Science Foundation. The foundation will match 50 percent of equity investments in MidSchoolMath up to $1 million.

MidSchoolMath is not your average math curriculum program. In fact, the program took conventional teaching methods and the math textbook and tossed them aside.

According to a press release in the Albuquerque Journal, The Math Simulator is a computer software product designed to address all 146 Common Core State Standards for math in grades fifth through eighth.  The program uses film and software to bring story problems to life. Deployed by teachers, students can see and experience how their solution is working out, receiving real-time feedback and motivation to continue grappling with the problem until it is successfully solved.

Although not currently used in Los Alamos Public Schools, schools in Santa Fe, Taos, Carlsbad, Las Cruces and Albuquerque have utilized the curriculum. CEO and Co-Founder Scott Laidlaw explained the program, which is a combination of digital and print, immerses students in different scenarios. They can tour the cosmos, travel back to medieval times and anything in between.

The goal, he explained, is for students to solve a problem in context where the math actually makes sense, whether it is finding a cache of food on Mars or curing the Black Plague.

“What we do is we build scenarios or contexts … in high end film or software and immerse students in the scenarios,” Laidlaw said.

The goal is to show students that math has purpose. And, The Math Simulator allows students to fail at the scenarios. Failure, in fact, is key.

Laidlaw said the best and most effective learning occurs when students fail and then return to the problem to find out how to fix their mistakes.

He added the program has a proven track record. The program was tested under a National Science Foundation Phase I study against two of the nation’s leading curricula. The students who used The Math Simulator were 2.3 times more likely to score correctly on a post test.

Laidlaw said what is shown through The Math Simulator is students are improving in both procedures and conceptual understanding.

“The biggest part is conceptually they have a better understanding,” he said.

Teachers also appreciate it. Laidlaw said traditionally, teachers provide information and then follow this up with testing.

“Primarily, however, teachers really want to see their students engage in something meaningful to them,” he said.

The Math Simulator provides that. Plus, it offers engagement for the teachers, too. “Teachers have more fun,” Laidlaw said. “They enjoy seeing math in other contexts.”

The Math Simulator originated in part from Laidlaw’s own experiences as a teacher. “I was a teacher for years in a classroom and I felt there was a way better way to do this,” he said.

After five years of testing ideas in the classroom, he met CFO and Co-Founder Jennifer Lightwood, who believed it was possible, and important, to make a larger change. With a business background in bringing innovative software companies to market, Lightwood’s desire was fueled by the fact that nation-wide there is a large decline in fourth through 10th grade math proficiency when compared to other countries.

“The National Science Foundation supports small businesses with the most innovative, cutting-edge ideas that have the potential to become great commercial successes and make huge societal impacts,” said Barry Johnson, Director of Division of Industrial Innovation and Partnerships at NSF in a press release. “We hope that this seed funding will spark solutions to some of the most important challenges of our time across all areas of science and technology.”

Laidlaw said they are really pleased with what has been accomplished for a relatively small company.

The opportunity to spark a national change is rare thing for small company, he said. “For the size we are, we have the opportunity to make a pretty good difference not just in New Mexico but across the U.S.”

For more information or to inquire about the NSF 50 percent Equity Investment match in MidSchoolMath, contact Laidlaw, scott@midschoolmath.com.