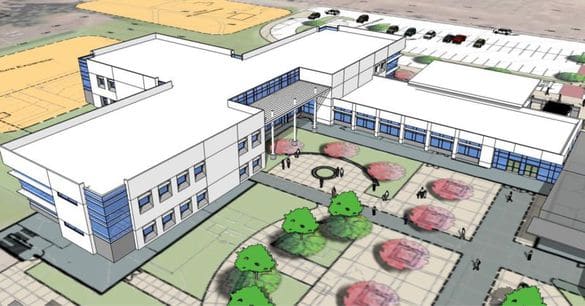 The construction project at Los Alamos Middle School hit a snag, but is now moving forward.

The Los Alamos Public School Board learned Tuesday night that the project was put on ice last week after contractor Bradbury Stamms filed a protest.

Board member Dawn Venhaus explained to the Los Alamos Daily Post that during a bid process, bidders are allowed to protest if they feel something is unfair.

She said Bradbury Stamms was concerned over the “extra-points” that the New Mexico Taxation and Revenue Department grants in-state companies.

This had nothing to do with the district, she said, adding that two other districts in New Mexico were facing the same situation.

Wolfe explained that the school district’s attorney issued an opinion on the protest, stating the protest was invalid and the district could move forward on its contract with McCarthy.

Dave Wharram of Gerald Martin, working as the owner representative for the project, reported during Tuesday’s meeting that the contract with McCarthy was signed and work is ramping up.

Wharram said preparation for asbestos abatement at LAMS is now complete at Building 500 and work is moving on to Building 100.

He added that the utility layout for the portables will be discussed Wednesday.

Board President Kevin Honnell said it was as though “the light turned from yellow to green in the last few days.”

“When do I get to bring my sledge hammer,” Board Secretary Melanie McKinley asked.

Work at LAMS will include building a bus loop just south of the campus, behind the cafeteria.

Also, a two-story building will replace the school’s 100 and 500 wings and some areas in the administrative building will be remodeled.

“We think this will be a great school,” Wolfe said. “We just need to move forward.”

To avoid conflicts when the district turns to its next construction project at Aspen Elementary School, the school board voted to authorize administrators to proceed with a request for proposals for Contract Manager at Risk (CMAR.)

Construction at Los Alamos High School had a CMAR contract and it was successful, McLean said.

Honnell asked Wharram his opinion on CMAR. Wharram said there are advantages and disadvantages.

CMARs are open books, they show all the numbers, he said. In RFPs, there are more risks to the district but they are cheaper.

“That’s why you pay a little more, but it’s insurance,” she said. “If something unforeseen happens in the construction project, then the CMAR is the way to go.”

In other construction news, the school board heard a report on landscaping at Los Alamos High School but voted to table the issue pending further information.

The plan presented to the board projected an estimated cost of $625,000, but McLean said, “There are savings I believe we can make.”

For instance, the electric poles could be repurposed at the middle school, he said. Also, the number of picnic tables and trees could be looked at.

Superintendent Gene Schmidt explained that there are currently no hard costs, that it’s just landscape concepts.

McKinley expressed her displeasure saying, “I’m not impressed at all with these landscape plans. Totally uninspired.”