Middle of Nowhere: The Galapagos 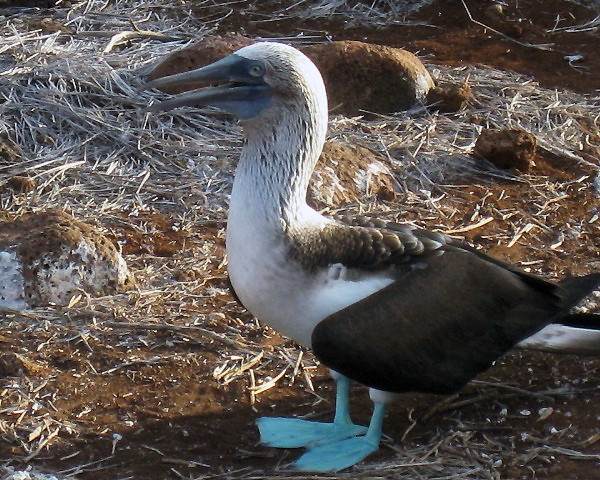 A Blue-footed Booby basks in the sun on North Seymour Island. The Blue-footed Booby is a marine bird in the family Sulidae, which includes 10 species of long-winged seabirds. Photo by Kirsten Laskey/ladailypost.com 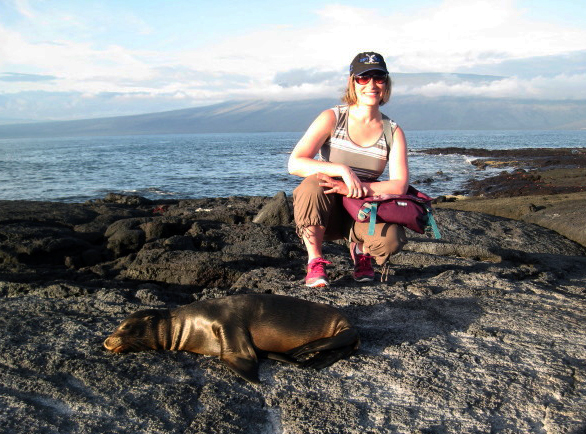 The archipelago defines middle of nowhere. Most of the islands’ only inhabitants are birds, iguanas and tortoises. Humans who did decide to venture to this neck of the world were a cast of characters: pirates, buccaneers and a German couple who decided not only to shed their clothes at the islands but also all their teeth.

Charles Darwin may have shined the spotlight on the Galapagos with his theory of evolution but today hundreds of thousands of people flock to this spot in the middle of nowhere for its incredible beauty. And I was one of them.

As with many places in the middle of nowhere, just getting to the destination is a whole adventure. It took five flights to arrive at the Galapagos. At the start of May, I hopped on airplanes begining in Albuquerque, then Atlanta, Miami and finally Guayaquil, a city in Ecuador.

My fellow travelers and I proceeded to board a small plane to Baltra, one of the 18 main islands in the Galapagos. There are also three smaller islands and 107 rocks and islets. All of them are protected as a national park and marine reserve. In fact, the Galapagos is a UNESCO World Heritage Site.

We were not done yet. Descending from the airplane at a small airport that practices environmentally friendly methods of operation such as recycling water, we boarded buses that took us to a dock. We then strapped on orange life vests and waited our turn to perch on the perimeter of zodiacs, large inflatable motor boats that took us to the Islander.

The tour I selected is a partnership between National Geographic and Lindblad Expeditions. The brochures assured me that this was a very casual, laidback cruise. There was no need for formal dress. When the zodiac wiggled up to the entrance of the ship, we were greeted by Lynn Folwer, the expedition leader who received her PhD after doing field work in the Galapagos. She greeted us barefoot with a big smile and an open hand to help us onto the deck.

As the tour progressed, we were all shucking off our shoes. Everybody would wonder around wearing wetsuits and goggles pushed up on the tops of their heads. Our clothes were splashed with seawater and sand would wedge itself between our toes.

Sure, we may have looked a bit bedraggled but what did it matter when everywhere you looked there was another wonder to gaze at, a new beautiful landscape to see?

Our first stop was North Seymour Island. We walked along a path of reddish lava rock and a sparse forest of low, white tress, their tangled branches stripped of leaves. But the wildlife! We all dashed to snap photos of the male Blue-footed Booby strutting his robin egg blue feet to gain the attention of a nearby female, as well as the male frigate birds that puffed out their scarlet-red pouches to attract a mate. Sea lions bedded down in the white sand at the beach, nuzzling each other and soaking up the last of the sun’s rays. Land iguanas with their mottled yellow heads crouched under prickly pear cactus.

It was not just the wildlife that was breathtaking, it was also the scenery. At the end of an elevated boardwalk on Bartolome Island, we were treated to an expansive view of tuff rock, mangrove forests, a copper-colored beach and an indigo ocean. In the water, we spied sea turtles, parrot fish, giant starfish, huge sea urchins and even at one spot, sharks.

We trekked across ebony-colored lava rock on Fernandina and Santiago Islands. The hardened lava was a perfect camouflage for the marine iguanas. The reptiles were black themselves and would sit, by the hundreds, to lap up the sun.

I wanted to see all of this, of course, but just as it is an unwritten requirement to see the Eiffel Tower in Paris, or to take a gondola ride in Venice, I eagerly looked forward to see some giant tortoises. We saw a good deal of them on Santa Cruz Island. Santa Cruz stands apart from many of the other islands because people live on it. If fact, the town seems to be booming; the streets are full of hotels, restaurants and tourist shops.

Up in the highlands, it is a different story. We went onto privately-owned property that is pasture but amongst the cows munching on grass, are giant tortoises. These animals appear as relics from the dinosaurs. Their shells and legs are massive while their long necks are skinny. These animals would peer at us with their tiny, beady eyes and smell us with their slit-shaped nostrils. We were told that they can’t hear very well at all, their eyesight is mediocre but their sense of smell is pretty good. What they lack in the senses, they make up for in toughness. Tortoises can survive two to three years without food or water, which makes them a great pet for children, someone joked. Their lifespans are also long – it was said tortoises can live to be 100 or even 200 years old.

There is something truly special about the Galapagos; in 50 years when a new group of tourists board the Islander, they will see the same sights I saw earlier this month. There are certainly challenges at the islands including invasive species but there is an effort and desire to preserve and protect the Galapagos. It is too valuable to lose, even if it is located in the middle of nowhere. 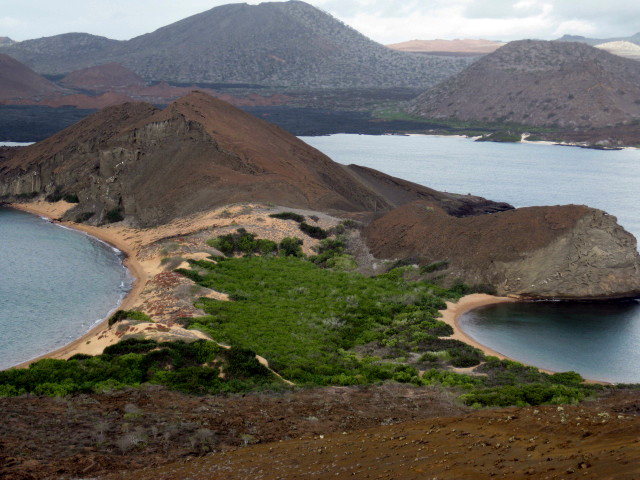 View from the top of the path on Bartolome Island. Photo by Kirsten Laskey/ladailypost.com 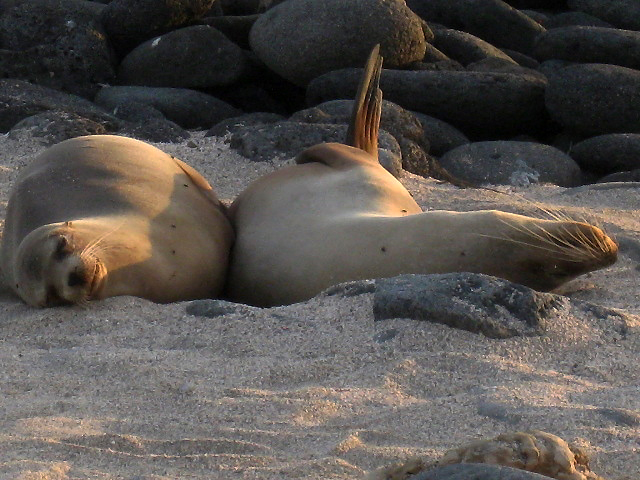 Sea lions snoozing on the beach. Photo by Kirsten Laskey/ladailypost.com 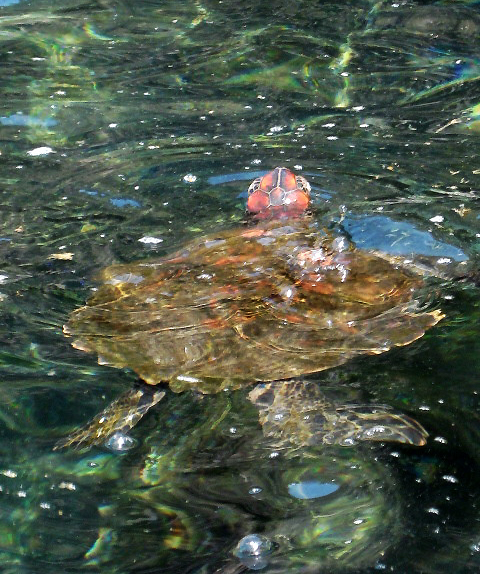 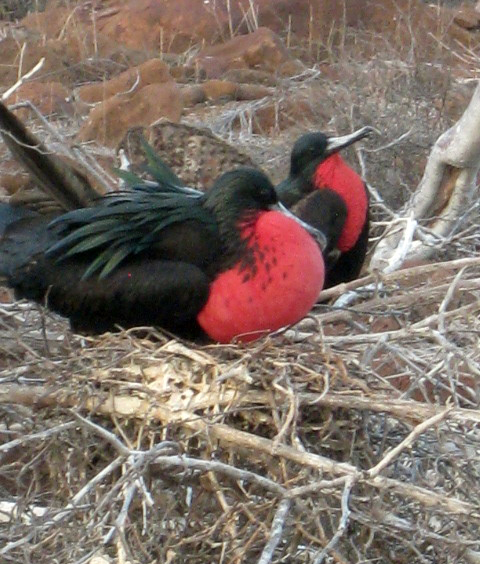 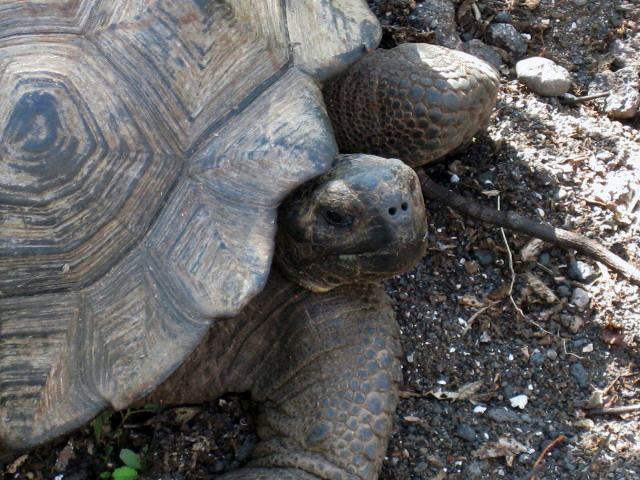 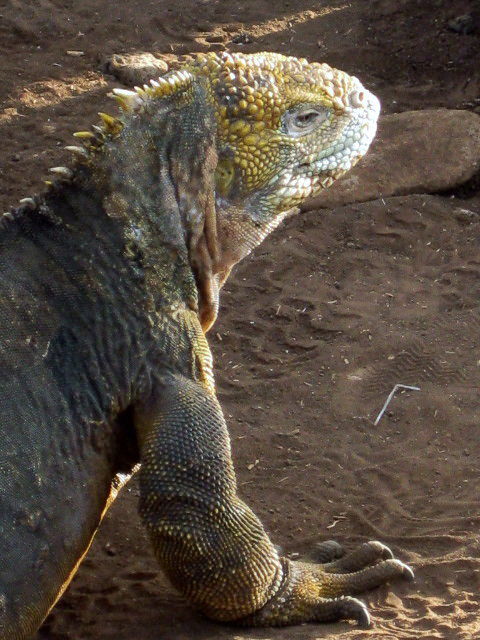 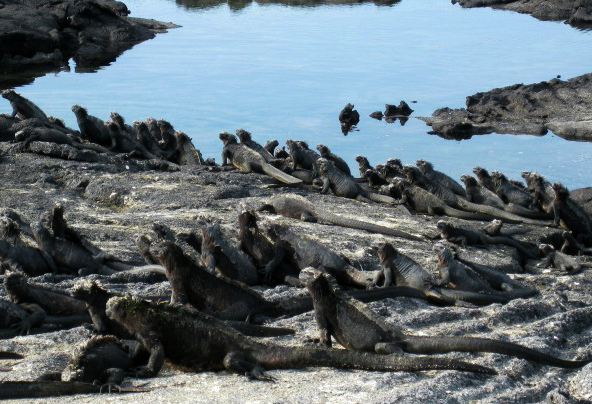 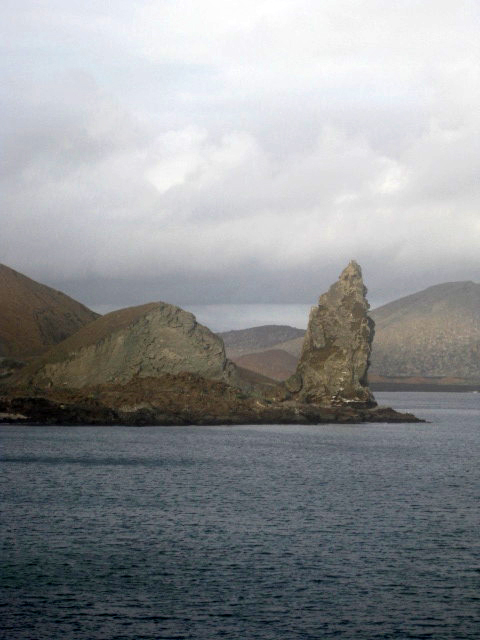