Middle of Nowhere: Looking for ‘Moonrise’ 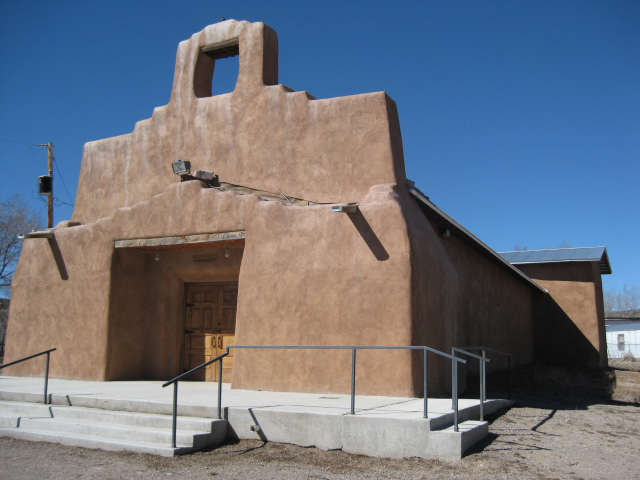 The Hernandez church appears in a famous photograph by Ansel Adams. Photo by Kirsten Laskey

Ansel Adams’ “Moonrise, Hernandez, New Mexico” is one of the most popular photographs ever taken. Maybe just as impressive as the image he captured is the story behind it.

Websites report Adams was driving toward Española when he happened to see a church and cemetery the size of thumbprints against massive mountains and the moon hovering high in the sky. The scene made him stop his car on the shoulder of the road.

Wikipedia claims Adams yelled at his traveling companions to hurry up and help him get this image before the light changed and they missed their chance. My mother heard Adams hopped on the roof of his car to snap the shot. However he responded, one thing is certain; he had a stroke of solid gold luck right in the middle of nowhere.

More than 70 years have passed since Adams photographed “Moonrise,” but the image still has the power to enchant its viewers. It certainly enchanted my parents and I. We decided we would follow Adams’ footsteps and attempt to experience what he did 73 years ago.

This was not without challenges. The first obstacle was to pinpoint the photograph’s location. Doing an Internet search proved we were not the first ones to have this idea to pay homage to Adams’ work. I read one blogger’s account of a visit to the location of “Moonrise,” and while he described how he digitally captured the church in Herandez, he did not provide any directions to the place.

After a few more online searches, I finally pieced it together. Travel along U.S. 84 to Espanola. Between mile markers 194 and 195, you’ll see San Jose Church on the left-hand side of the road. On the right, there will be a small road to turn on. Follow that road and you’ll come upon the church Adams photographed. The directions sounded so simple but we encountered our second obstacle when we approached the mile markers in my parents’ two-door Jeep. There are a lot of small roads you can turn on that are across from San Jose Church. Most of these dirt-packed streets either meander for a while and eventually fade into brush or lead to someone’s front yard.

We patrolled this stretch of highway in both directions, looking for a way in. The first road brought us to someone’s front door and their two Chihuahuas guarding the place. They yipped at us, the intruders, passionately. Even when my father put the car in reverse, the Jeep’s huge, knobby tires coming right at them, they did not cease their barking, even running after us. I clenched my teeth in fear these two dogs the size of bread loaves would be killed by our vehicle. Turning my head, however, I saw they had finally stopped their pursuit and just watched us move down the road.

My father gets the credit for finding the correct street. The church and the cemetery are located off a road named Moonrise Ranch. Although it looks small in Adam’s picture, the church is actually pretty big up close. Even though it was a Sunday, there wasn’t a soul there. The only noise we heard came from baby goat that was bleating in the yard next door. We walked the church’s perimeter, gazing at its smooth, terra-cotta stucco walls and metal roof. I stood at the chain link gate that was the entrance to the cemetery and looked at the headstones – a hodge-podge of stone makers and metal crucifixes. Seeing the gravestones in Adams’ photograph always gives me a sobering feeling. Looking at them up close, I got the same feeling.

We climbed back into the car and returned to the highway to see everything from where Adams saw it. The view has definitely changed. In the photograph, the church is the sole man-made structure. Now houses, trailer homes and cars are scattered everywhere. We all pulled out our cameras to snap shots.

The pictures we took are not anything like Ansel Adams’ “Moonrise.” After all, he was a leader in the art of photography and we were just following his footsteps. Still, I like to think we share something in common with this famous photographer. We see the beauty in places that are small and hidden away and we jump at the chance to explore and document these places. For truly there are no greater adventures than the ones that are experienced in the middle of nowhere.