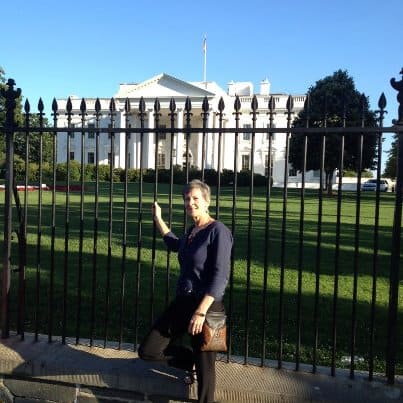 “I have always tried to pursue things that stir my passion. Work becomes play when I am doing things I really love and find meaningful,” Hall told the Los Alamos Daily Post. “I am fortunate to have had opportunities to work on a variety of projects serving K-12 teachers and students, undergraduate students, my peers in science and the public. And, I am lucky to have worked with and been helped by many other talented and passionate people.”

Hall developed the Cafe Scientifique program in New Mexico and just recently was notified that she will receive a $2.6 million grant from the National Science Foundation to disseminate the program nationally.

“I could not have done this without the help of people like Sharon Stover, who introduced me to teachers and the principals when I was new to the area. Dr. Tony Sena at Northern New Mexico College opened many doors to work with students and parents in Espanola and Pojoaque,” Hall said. “LANL scientists have been outstanding in working with the teens in the program, and the LANL Community Programs Office has been instrumental in providing support for the effort.”

Photo: The Excellence in Geophysical Education Award was established in 1995. Courtesy/AGU

From curriculum development introducing effective pedagogical approaches to using data and technology in the classroom to customizing informal science programs for the needs and interests of teens, SES seeks to make learning engaging and rewarding.

Most projects involve collaborations with a number of other organizations to bring the best talent and ideas together.

Hall will be formally honored for her work at a special honors ceremony Dec. 5 in San Francisco.

To the Excellence in Geophysical Education Award Committee:

“I hereby nominate Michelle Hall for AGU’s Excellence in Geophysical Education Award. Her service to our community in advancing geophysical education across its full spectrum place her squarely in the company of previous recipients of this award. Her contributions are many:

Michelle is a geophysicist whose transition to geoscience education began with her organizing an Arizona hub of what became the Educational Seismology Network. The program aimed to put simple seismometers in classrooms, network them via regional hubs across the country, and support analysis of the data they would collect via inquiry-based curricula. Although some elements of ESN faltered, under Michelle’s leadership, the Arizona network thrived. Eventually, management of ESN was taken over by IRIS. Michelle expedited transfer of the Arizona program to IRIS, where it became the core of a revitalized program under IRIS’s stewardship. This was pioneering work in what has become accepted wisdom, that effective geoscience education must entail authentic inquiry, driven by manipulation and analysis of data, thus fostering the integration of research and education.

Michelle’s vision and leadership is reflected in her remarkable success with the proposals she submitted to NSF. She has had over 20 awards from NSF, both from the Directorate for Geosciences and the Directorate for Education and Human Resources (EHR), as well as from the cross-directorate Graduate Teaching Fellows in K-12 Education (GK-12) program. She has received awards across the spectrum in EHR: undergraduate education, K-12 education, and public science education. She has consistently conceived of innovative ways to integrate the fruits of geoscience with  quality educational content, informed by research on learning; submitted competitive proposals to NSF; and followed through with substantive output that has had a high impact on geoscience education.

Michelle put together a team that produced rigorous Geographic Information System-based curricula for introductory Earth science courses at the college level that provides authentic inquiry experiences of relevant problems and processes. The approach uses an innovative “Teach with GIS” approach (as opposed to a Teach about GIS), which allows everyone to learn the technology while solving an interesting geoscience problem. With this approach, more instructors could integrate GIS-based curricula in classrooms where neither the instructor nor student is an expert in GIS. The success of the curriculum can be seen in its adoption at over 100 colleges and universities. A high school version was published in 2008. She has presented numerous workshops and talks to college and high school instructors to promote adoption and dissemination.

Michelle received a GK-12 award in the first year of this long-running, very successful NSF program. The program provides graduate students with experience and skills in teaching, as well as research, before they join a faculty.  The program she developed at the University of Arizona provided talented graduate students with opportunities to serve as scientific and technical resources in K-12 schools, built strong partnerships between university scientists and local K-12 teachers to improve STEM education, and became a template for successor GK-12 programs.

Michelle was a key contributor to initiating the IRIS Education and Outreach program in 1996 and developing its program plan in 2001. IRIS was one of the first research communities to encourage its scientists to reach out to the public and K-14 education. At the time, there were few existing high quality resources available to engage the public in seismology and Earth system science and few scientists with experience doing so. Much of her role in the early years was teaching her peers about effective ways to engage the public and K-12 educators and developing resources to support those efforts. Based on this experience, as chair of the EarthScope E&O Steering Committee, she led the development of the EarthScope Education and Outreach plan. An EarthScope principal told me that he considered the content of the E&O plan to be even more substantive than the three accompanying science plans.  She published two papers and the E&O program plan and gave 13 presentations at national meetings—primarily AGU meetings—related to this work.

Michelle organized an impressive team to help the Digital Library for Earth System Education develop a comprehensive Quality Assurance Plan. As Executive Director of DLESE from 2004-2006, she worked with the twelve Core Services PIs to implement the Plan; later she led a very successful field test of the Plan’s resource review process. Her leadership of  DLESE required significant collaboration and coordination to balance many divergent goals and expectations.

With NSF support, Michelle has been running a unique Cafe Scientifque program for high school teens in four highly diverse towns in northern New Mexico. This popular program, now in its fifth season, is having a huge impact. Teens say that theyincreasingly see the relevance of science in their lives; can put the science they learn in school within a more relevant context; discovered that scientists are interesting people and have interesting lives in science; and have gained interest and knowledge in STEM and STEM careers. A serendipitous aspect of the program is that a large cadre of scientist-presenters have now been trained to share the fruits of their science with the public.

Michelle has regularly brought her critical analysis skills to researchers in the geoscience community who are seeking to develop broad-reaching education and outreach plans and programs. These programs have allowed individual investigators to take their first steps to get involved locally in education and outreach, and fostered major collaborations among investigators to increase national awareness and prominence of the geosciences.  She has been a mentor and role model to many students at all levels, providing them with their own critical analysis—as well as technical—skills.

Her critical analysis skills have been in demand over the years in service on many NSF review panels. She brings that reviewing skill to articles submitted for journal publication as well, as evidenced by a Citation for Excellence in Reviewing from the American Geophysical Union. She has regularly been sought out by community committees seeking to implement innovative geoscience education initiatives. An example is her co-convening of the 2004 On the Cutting Edge workshop on Teaching Geoscience with Visualizations. This kind of service throughout her career has contributed significantly to our community in raising the quality of geoscience education across the board.

Through significant and sustained contributions to the full spectrum of geophysical education throughout her career, Michelle Hall has demonstrated fully all the attributes that are sought in the Excellence in Geophysical Education Award. As a member, she is a credit to the American Geophysical Union. I recommend her for the EGEA in the strongest terms.”