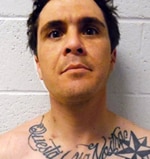 Use of a Los Alamos man’s passport taken during an April 10 burglary of a Rim Road residence has led to four counts of identity theft for Michael Genarro Daddio, 34, of Albuquerque.

According to documents filed by Det. Ryan Wolking in Los Alamos Magistrate Court, Cpl. David Boe and Cpl. Gabriel Nieto went to the residence at around 5:30 p.m., April 10 in response to a report of a burglary. One of the victims said when he arrived home he found a door to his garage partially open. A backpack and pillowcase from inside the home were sitting on the garage floor.

On entering the home the victim found a few out-of-place items at the bottom of the stairs and in the master bedroom, drawers from a jewelry cabinet were on the floor and two safes were missing. The victim exited the residence and called LAPD.

After clearing the residence, police found the three upstairs bedrooms had been entered and drawers appeared to have been opened but nothing seemed to be missing. The backpack from the garage floor had jewelry inside. The victim reported that the safes contained important documents and $500 in cash.

The police records say neighbors had observed an older green four-door sedan outside the home earlier. They speculated that the alleged burglar was startled when packages were delivered and left the residence without all the items placed in the garage.

When Det. Wolking responded to the residence, the victim notified him of three fraudulent credit card transactions on credit cards belonging to him and his wife, which he had found out about through fraud alerts from credit card companies. The cards were used that day at two different Home Depots, one in Santa Fe and one in Albuquerque as well as Cabela’s, Target Uptown and the Downs Casino in Albuquerque and the Santa Ana Star Casino in Bernalillo. On at least two occasions, another man was with the subject but he has not yet been identified.

Wolking reached out over several days to casinos and businesses where the credit cards were used in an attempt to collect video, receipts and other information. The victim’s passport was used as identification by Daddio and in one instance could actually be read in surveillance footage.

At this point, Wolking began distributing photos and information about the case and the Crime Stoppers reward of $500 for information leading to the arrest of the suspect(s) to media sources in Santa Fe and Albuquerque in the hopes that someone could help identify the suspect or suspects in the case.

Thursday, a tip was placed with the Crime Stoppers line and the caller identified Daddio who is presently incarcerated in the Albuquerque Detention Center in connection with two other incidents in the Albuquerque area, which occurred since the Los Alamos burglary.

In one of the Albuquerque cases, just last week District Judge Pro Tem Neil Candelaria denied a request for pretrial detention and granted conditions of release. Second Judicial District Assistant District Attorney Dana Beyal had asked for Daddio to be detained because of his past conduct, history relating to drug and/or alcohol abuse, criminal history and record concerning appearance at court proceedings.

In denying the request, Judge Candelaria noted that although Beyal maintained Daddio had broken into a building and run away from police toward a car where a firearm was later discovered, he was being asked to speculate that Daddio knew the gun was in the vehicle and was somehow going to use it on police, which he said was not reflected in the complaint.

Two other Los Alamos homes were burglarized close to the same time frame, one on 45th Street and the other on San lldefonso Road and LAPD believes the same suspect is connected to all three burglaries.

The investigation is still ongoing and although to date only the identity theft charges have been filed, additional charges are anticipated to be filed by LAPD and other agencies in the surrounding area. The collective loss from the three Los Alamos burglaries alone is estimated by LAPD to be in the tens of thousands of dollars in cash, jewelry and other items.

LAPD officials have said they will continue to pursue burglary investigations to ensure the safety of local residents and their homes. As of Saturday morning, court records did not yet confirm that the warrant for arrest requested by Wolking and signed by Los Alamos Magistrate Court Judge Pat Casados had been served to Daddio.