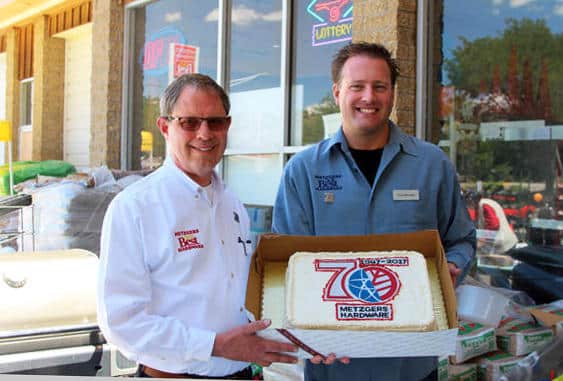 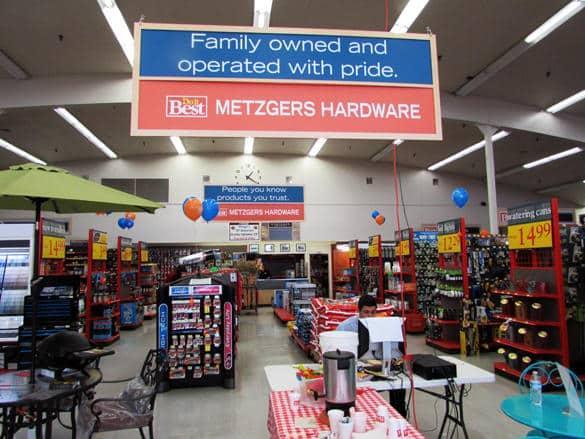 The Los Alamos store was all decked out for its 70th birthday bash in June 2017. Photo by Kirsten Laskey/ladailypost.com

By KIRSTEN LASKEY
Los Alamos Daily Post
kirsten@ladailypost.com
Metzger’s Do It Best has earned many accolades during its 70 years in business. It recently received another one: recognition as one of HBSDealer magazine’s 2018 Hardware All Stars.
The recognition came in the trade publication’s May issue. The article states, “Each year, HBSDealer solicits nominations from readers and the industry for Hardware All Stars. And each year, we’re rewarded with a fresh class of high-performing, community-minded, service-oriented businesses worthy of the honor.”
It is further written in the article that “During the course of our research, we’ve met dealers who take risks, and inspire staff and lift communities.”
The article highlights 50 businesses, one from each state. Metzger’s earned the top spot for New Mexico.
Regarding Metzger’s, it is in written in the  the article that “Over the years, Metzger’s has earned a reputation as the place that carries unique housing stock for homes built during the Cold War era when Los Alamos provided government-issued housing …When Metzger’s celebrated its 70th anniversary last year, virtually the entire town came out to honor this quintessential Main Street hardware store.”
Metzger’s General Manager David Jolly said it was exciting to receive HBSDealer’s recognition.
He said they didn’t know about it until the magazine called them for a comment. He added, when seeing the other Hardware All Stars, Jolly felt Metzger’s was in really good company. For instance, last year, Big Jo True Value in Santa Fe was honored.
“To be in that kind of company is exciting,” he said.
He also commended his staff, saying, “We’re excited about it. Our whole staff works really hard.”
In the past the industry has honored the Los Alamos business but to receive recognition from a national publication … “this is a pretty big deal,” Jolly said.
Keeping the store current and focusing on customers service are what make Metzger’s successful, he said. The store runs at a high level “but what we are about is taking care of the people of Los Alamos,” Jolly said.
Los Alamos and Metzger’s Do It Best have a long history together. Metzger’s has been in business since 1947.
When it was decided to make Los Alamos a permanent community after the Manhattan Project, officials approached Lee Metzger Sr. about opening a retail store. They knew Metzger had done business with the Manhattan Project in Hanford, Wash., and therefore had the appropriate security clearance to operate in Los Alamos, Jolly said.
Since that time, Metzger’s has undergone many changes as the company has evolved to meet the changing needs of the community, including the opening of a second location in the new community of White Rock as it was developed in the early 1970s, Jolly said, adding that the company is now operated by Greg Metzger, the third generation of the Metzger family to own the business.

Click the link to read the article. 2018 Hardware All Star