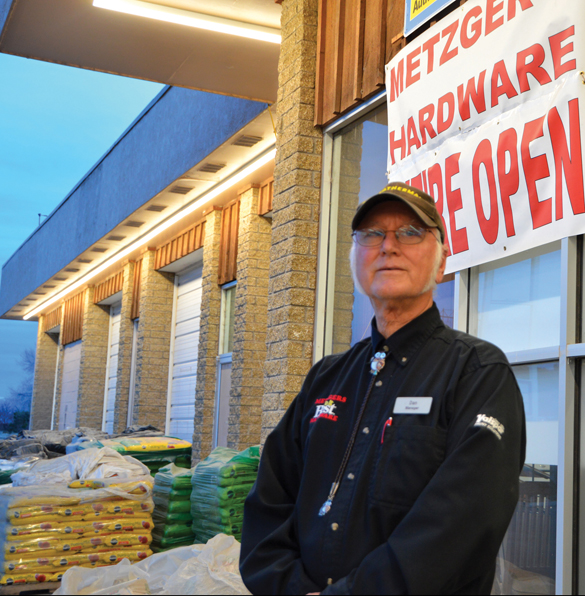 Manager Dan Saxton of Metzger’s in White Rock retires Dec. 31 after 20 years with the company where he’s had a great day every day since he started working there. Photo by Carol A. Clark/ladailypost.com

After 20 years of service, Dan Saxton is retiring Dec. 31 as manager of the Metzger’s DO IT Best Hardware Store in White Rock.

“I’ve had a great day every day since I started here,” Saxton told the Los Alamos Daily Post Wednesday. “A day doesn’t go by that I don’t have somebody thanking me for the service we provide here … and that’s very rewarding.”

Metzger’s General Manager David Jolly spoke of Saxton’s retirement and how much he has appreciated him.

“I really appreciate all the help he gave me in getting my feet on the ground when I first came here and his assistance in helping me understand Los Alamos and White Rock,” Jolly said. “Also the fact that he thinks of the White Rock store as a part of the town, more than just a business in town. His whole philosophy has been that the store has to perform as part of the community. That is a unique way to run a business, but a big part of what makes us successful. We will all miss him very much.”

John Hughes has worked for Saxton for five years. “Dan doesn’t know how to get mad at you,” Hughes said with a big smile. “He always counted on me and I’ve never told him no. I’m the muscle for him and always enjoyed delivering appliances with him. When I heard he was retiring I asked if he could be cloned.”

The woman affectionately known as “the paint lady” has worked for Saxton for about 20 years. “He is a boss that’s always in his employees’ corner,” she said. “He has always gone to bat for his customers and his employees and he is a kind and generous man to the community.”

Saxton also has employed many high school seniors over the last two decades and said working with them has been a great joy.

“They would work part time during the school year and on breaks and in the summer when they came back from college,” he said. “Parents often called their children’s time with us ‘the other school’ because I would teach them how to deal with people and about our products and services … that’s been a big happy point for me.”

When Saxton started at the store in August of 1995, he said there wasn’t nearly the inventory there is today. They had just the basic hardware items and very little lawn and garden stock. He remembered they would bring in one pallet of potting soil each season and now they receive many truck deliveries filled with 20 pallets of soil each.

“I’ll miss most the constant connection with all the people in the community,” Saxton said of his retirement. “It’s nice helping people with their projects.”

Saxton has two assistant managers at the store along with what he calls a “great crew”.

“Everybody is very helpful. It’s always been my philosophy that everybody learns how to do everything,” he said. “My assistant managers David Creamer and Charlie Hofhine will carry on and I’m sure things will be just fine.”

Saxton plans to get back into making custom cabinets and furniture when he retires. This was something he did before going to work for Metzer’s and said his equipment has been in storage all these years. He intends to make toys for the grandchildren and a split bamboo fly rod because he loves to fish.

“I’ve never had time to fish as much as I’d like to but now I will,” he said.

Saxton said he and his wife of 34 years, Mary McInerney, also plan to do some traveling when he retires. His wife retired four years ago from her position as attorney for Los Alamos County. She and Saxton have three children including Lynn, Michael and Rosemary.

The family moved to town in 1995 from Eldorado and Saxton went to work for Metzger’s. He recalled that Lee Metzger Sr. started the store in 1947 and it has passed down through the generations. He has worked for Bob, Tom, Lee and now Greg Metzger.