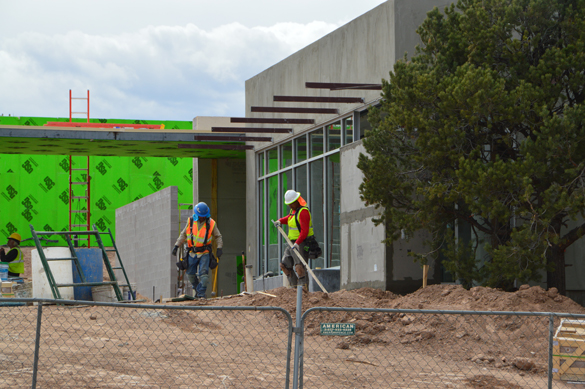 Artist Richard Swenson, center, and Central Park Square owner Philip Kunsberg Wednesday afternoon stand near the newly installed dinosaur created by Swenson. The scrap metal sculpture is just past the first building on the right hand side when entering Central Park Square from Central Avenue onto Main Street. Photo by Carol A. Clark/ladailypost.com 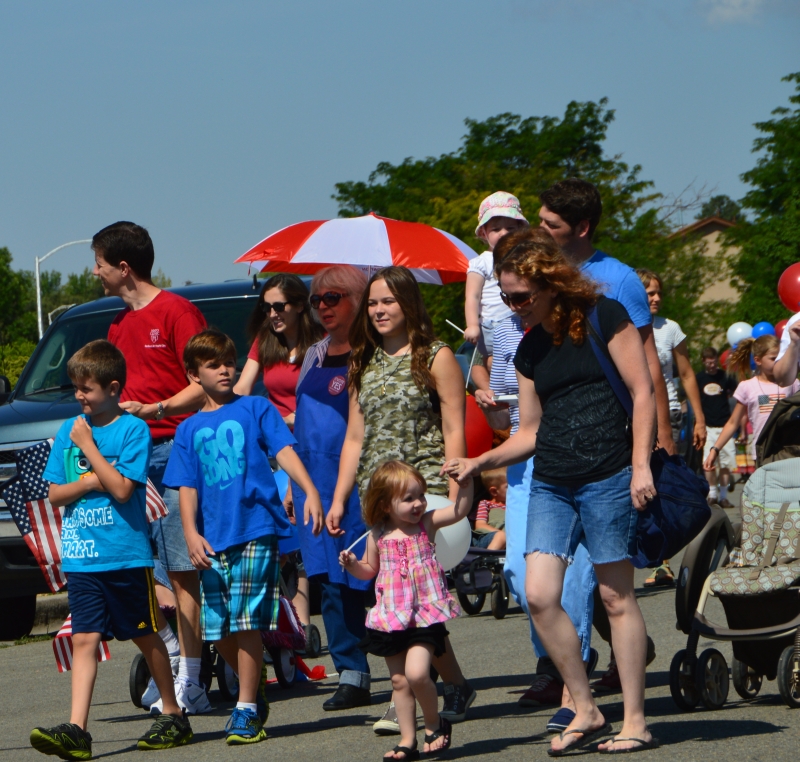 Scrap metal artist Richard Swenson Wednesday with the black and red dragon sculpture he created and placed in a planter area in central Park Square. Photo by Carol A. Clark/ladailypost.com 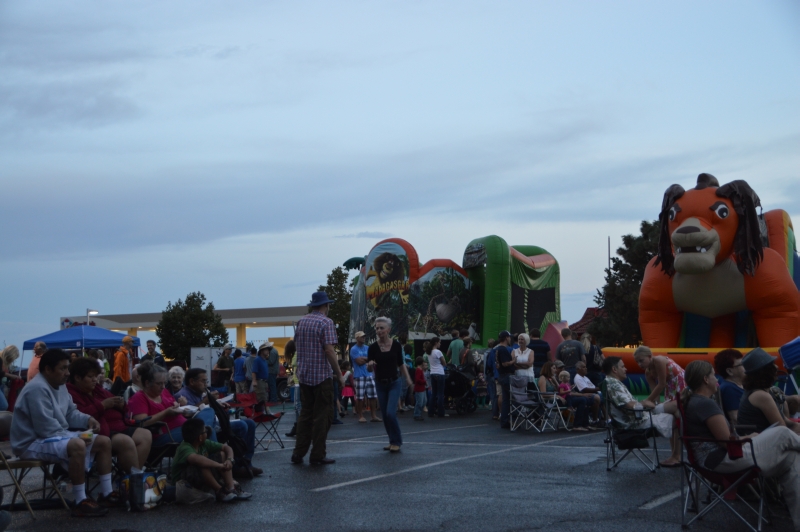 Artist Richard Swenson with his scrap metal dog sculpture that stands guard at the entrance to the Central Park Square administrative offices Wednesday afternoon near 15th and Nectar. Photo by Carol A. Clark/ladailypost.com

A large metal dinosaur sculpture is now visible on the right as one turns onto Main Street from Central Avenue into Central Park Square. A black and red dragon sculpture rests in a planter area near one of the sidewalks and a life-sized metal dog stands guard at the entrance to the Central Park Square administrative office near 15th and Nectar.

Central Park Square owner Philip Kunsberg told the Los Alamos Daily Post that Swenson has been a Minnesota farmer, a Navy Seal, an accomplished physicist, an inventor, a successful entrepreneur, a civic leader, and now “an astonishing artist.”

“He has never worked at the Los Alamos National Laboratory. He came to Los Alamos because of the unique character of our town. Of course, the special character of this town owes much to the Lab and to the gifted, dedicated people who work there,” Kunsberg said.

Swenson was born in 1934 on a ranch in the prairie of North Dakota. He was raised without electricity, running water or indoor conveniences. His was a culture of necessity and work was done with muscle – both man and animal, he said.

Subsistence was based on animals, and he worked, befriended, fed, cared for, slaughtered, and ate animals, fostering a reality most people in modern industrial society do not appreciate, Swenson said. He walked or rode a horse to his one-room country schoolhouse, attended an agricultural boarding school and followed with several years in the Navy Seal – Team Eleven.

Earning advanced degrees in physics and mathematics resulted in a 30-year career in nuclear reactor physics and acoustic research in support of anti-submarine warfare.

“There was no association with art in any of these endeavors,” Swenson said.

In 1977 he bought and operated a farm where he could revive and maintain his rapport with animals while still prospering in a high tech science world. This world was a stark contrast to his origins, he said.

“It would be a lonesome place in this high-tech world without animals, for we are one of them,” said Swenson who now lives in Los Alamos.

In 2000, Swenson began welding together miscellaneous scrap parts from his farm and restoration of his John Deer tractor collection. Swenson welded the parts into forms of the animals he grew up with, which led to many exhibits of his work.

“In a short period of time, Richard has contributed greatly and diversely to the spirit of this place. His witty, intelligent creations from scrap metal capture the mood and motion of living creatures. They make us aware of the amazing continuum of life on Earth, plus some creatures that exist only in our imaginations,” Kunsberg said. “They reveal what can be conjured up from what most of us would regard as junk. They embody surprising associations and transformations of ordinary shapes.

”His works can be found perched on mailboxes, climbing up walls, inside the premises of many local businesses, at the Library and the Aquatic Center, at the new Nature Center, and now on the grounds of Central Park Square. We have a scary dinosaur, a comic dragon, and a faithful dog very serious about his job. In my opinion, which is shared by many, we need to retain and value the retirees and elderly who contribute so immensely to the life of Los Alamos, and we should aspire to attract more like Richard Swenson.”